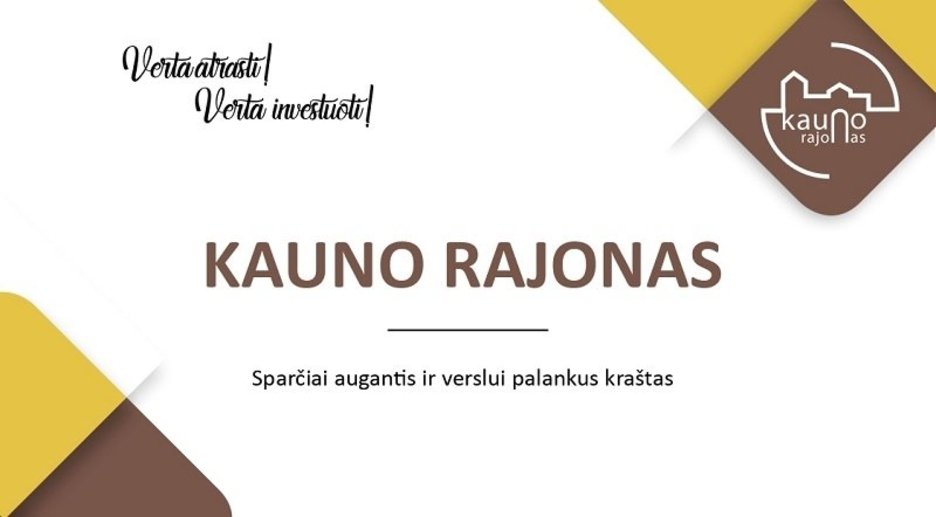 The mark of wired growth Kaunas region economy - a large number of issued building permits. In 2015 Kaunas region according to this indicator was in the second place, giving in only to the capital. In 2016 it remains among the top five leaders.

The favorable economic environment in Kaunas region is reflected by the continuously growing number of economic entities, which, since 2016 increased by 201 units. In the beginning of 2017, the region had 2709 operating economic entities. According to this indicator in the county, Kaunas district is second.

The largest part of the Kaunas district companies is engaged in wholesale and retail trade (28%). Other economic activities are distributed more evenly: processing manufacture (12%), other service activities (10%), construction (9%), transport and storage (9%), professional, scientific and technical activities (7%). Least characteristic economic activities are related to finance and insurance (0.2%), mining and quarrying (0.2%) and public administration and defense (0.2%).

The land and the lease of land and real estate taxes for three years are not applied everywhere to the newly set up enterprises and companies, which employ more than 50% of workers, who declared their residence in Kaunas district.

The municipality has also developed the program of Kaunas district small and medium business for 2014-2020. The Small and Medium Business Promotion Fund, annually distributing more than 14 000 businesses, was established as well.

The data of Lithuanian credit unions shows that Kaunas District Municipality entrepreneurial level is 177% of the average of Lithuania. According to this indicator, the municipality ranks third in Lithuania. Entrepreneurship rate is calculated taking into account the number of existing small and medium-sized enterprises, their annual growth, a number of individuals carrying out economic activities, their growth in the number, and the number of inhabitants and the companies that benefited from the Entrepreneurship Promotion Fund.

Foreign direct investment per head of population in Kaunas district in 2015 amounted to 1,206 EUR. Over the past three years, FDI growth is recorded.

Kaunas district is located in a convenient location. Motorways such as „Via Baltica“ and Vilnius- Kaunas- Klaipėda ensure good traffic communication as well as European rail gauge „Rail Baltica“. The International Kaunas Airport, which, in 2011 was recognized as the most rapidly growing in Europe, is also located in Kaunas district. Currently, Kaunas Airport offers 16 directions travel.

Kaunas district is an attractive place to live, work and to invest!