Welcome to pine-scented resort Kačerginė – town of beautiful scenery by the river Nemunas! 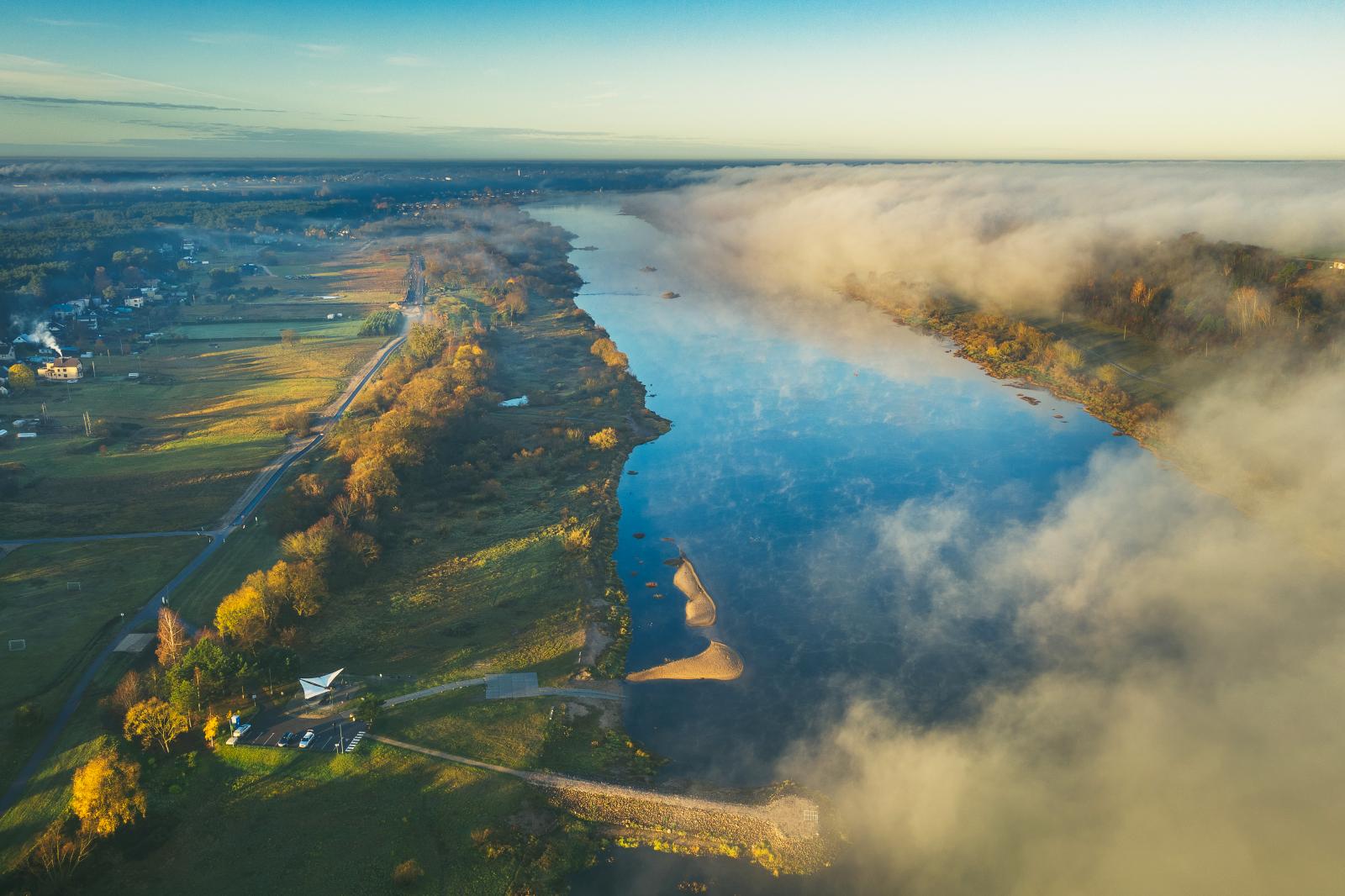 On the Nemunas river bank and near the pine forests situated town grew and beautified rapidly after the First World War. On 16 May 1933, two 19th century fishing villages, Palankiai and Kačerginė, were declared a resort area. This status led to the development and improvement of the town, and at the same time to the formation of its unique architectural character. This also changed the established way of life: various seasonal businesses and local trades emerged.

Many important Lithuanian artists and writers were staying and working in Kačerginė at the beginning of the 20th century.

Today Kačerginė is famous for its wooden architecture, which is an integral part of the town‘s identity, although many of the Kačerginė‘s buildings were simple wooden summer houses but some were more luxurious and eye-catching villas.

The villas of Kačerginė were nationalised during the Soviet era. They were adapted to various functions and became dispensaries, schools and other institutions. Most of the villas have lost their original purpose and appearance, and have been abandoned since the regaining of Lithuania‘s independence.

There is a hotel and two cafés in the town, you can book a theatrical guided tour. 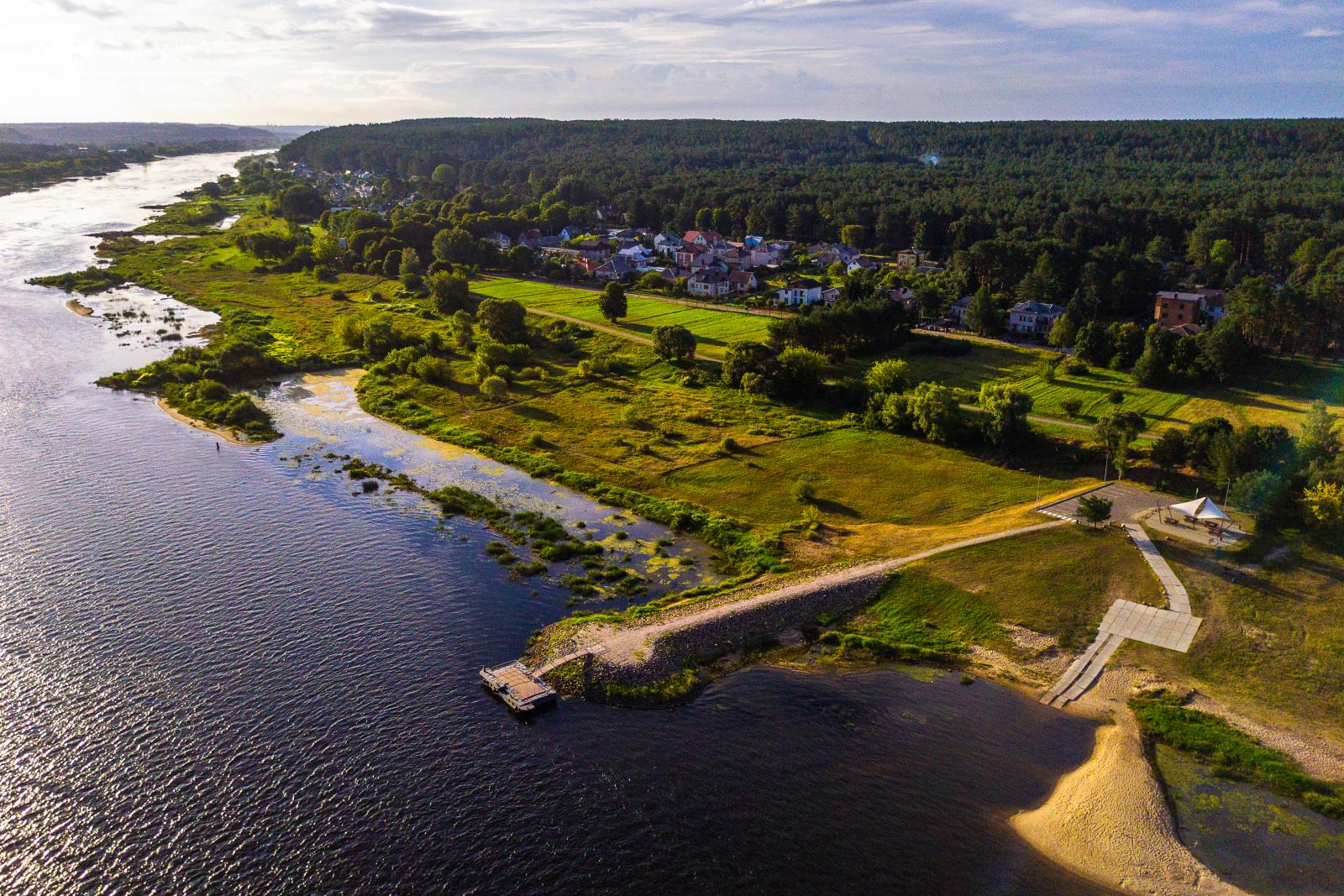 Mobile pier of Kačerginė was designed using a hydraulic engineering structure – a bund. The 25-seater boat “Zapyškis”, which takes tourists to the riverside towns of Kaunas district, arrives here every summer, as do other boats from Kaunas city and Jurbarkas city side.

You will find a gazebo, wooden benches and tables at the pier, an orderly landscaped waterfront.

Access to the pier is via the scenic bicycle path “Marvelė-Kačerginė-Zapyškis”. 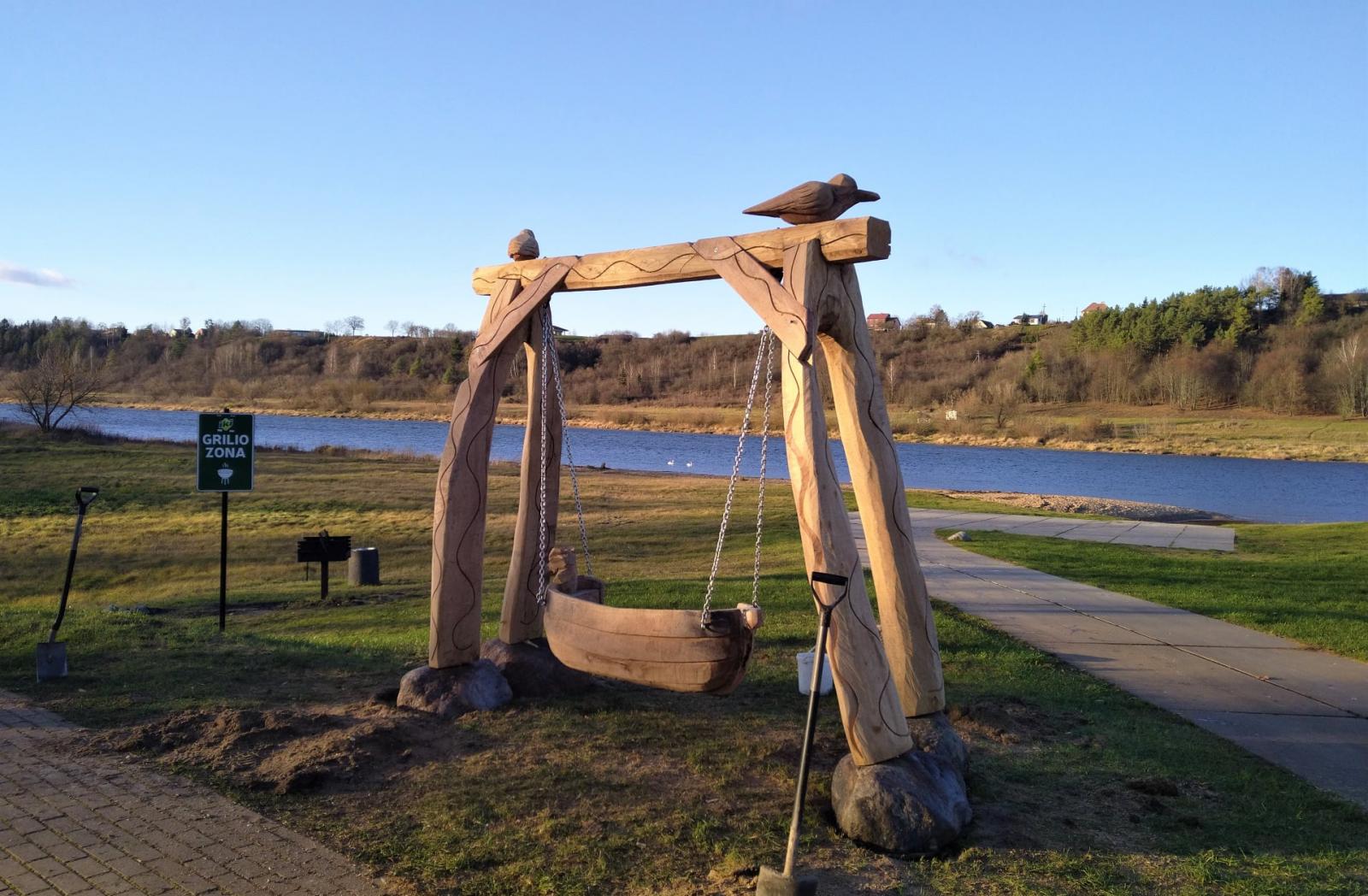 Pier of Kačerginė is the place where the world famous sculptor Raimondas Uždravis made a swing “Plaukiam” (“Let‘s Sail”). The swing is a part of the project Kačerginė “Little Capital of Lithuanian Culture 2020”.

It is carved from oak, resembles a boat. The soothing ripple of the swing echoes a romantic boat trip. The panorama before your eyes, Netoniai village, is looking down from the high banks of the Nemunas to the old Kačerginė summer resort. 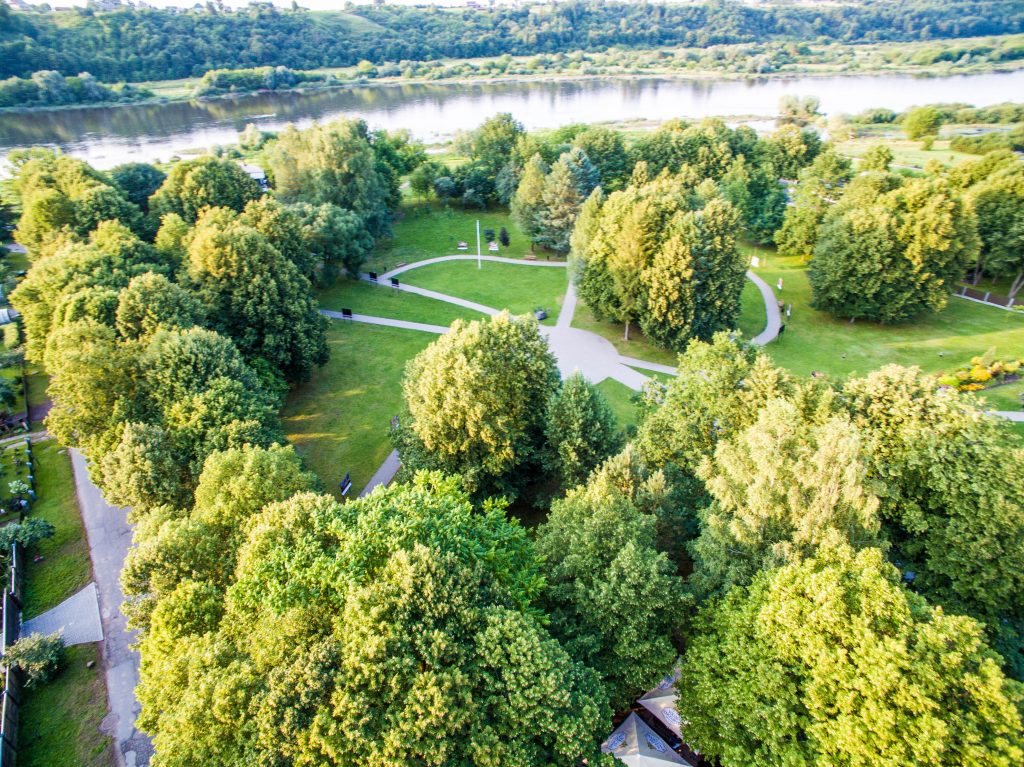 It is a popular park in the centre of Kačerginė, the centrepiece of the town. During the summer many events are held here: Kačerginė Resort Outings, musical picnics, community gatherings, bard, country and popular music festivals, photography exhibitions. You will find wooden sculptures, a children’s playground, benches in the park. 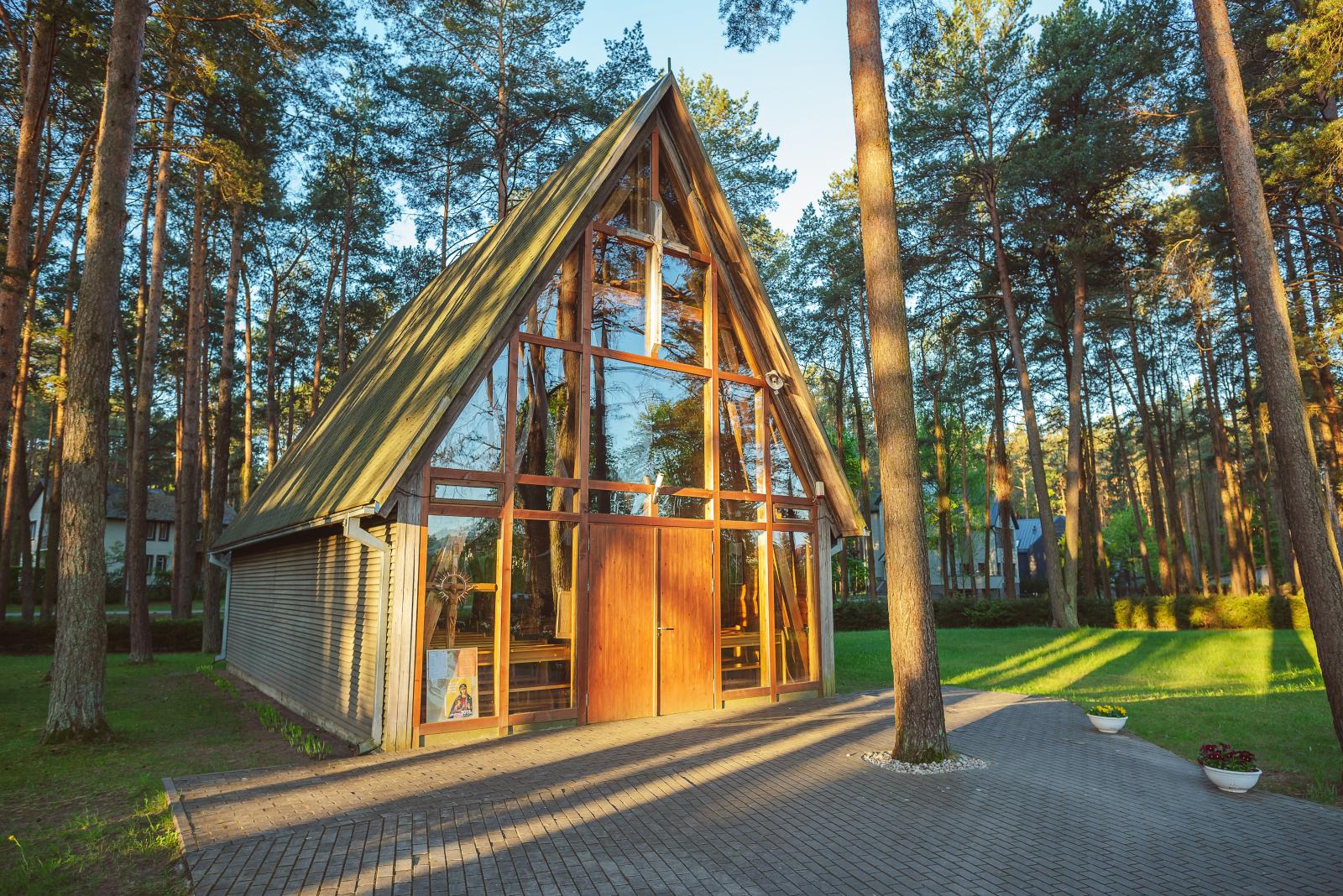 The chapel was built according to the project of architect V. Landsbergis-Žemkalnis in 1936. It was not a traditional solution, but a very modern one.

The long wooden walls of the neo-Gothic chapel harmoniously blend with the glass planes of the facades. On the west side there is a small sacristy overhang. Next to the chapel is a 12-metre-high bell tower. The chapel has a stained-glass altar, which is very rare in church interiors. 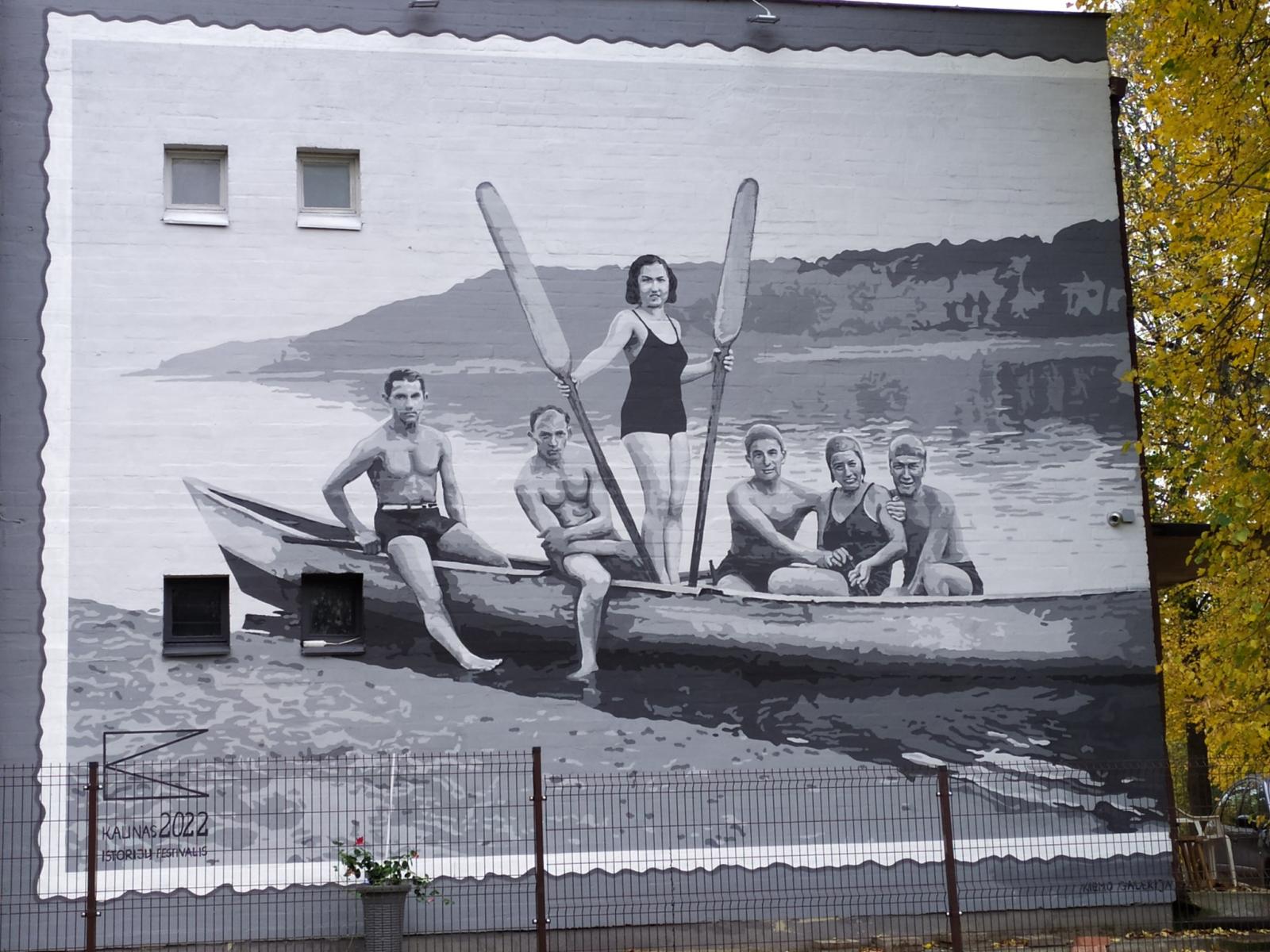 The street art work is inspired by an authentic interwar photograph taken in Kačerginė before World War II. It symbolises the rich history of Kačerginė.

In the artist‘s sensitive reproduction of the photograph, we see a group of friends. One of them is Judas Zupovičius, who was an active supporter of the underground ghetto resistance movement during World War II. The other is Hirsh Kadushin, a self-taught inventor, who with a homemade camera took more than a thousand photographs of life in the Kaunas ghetto. 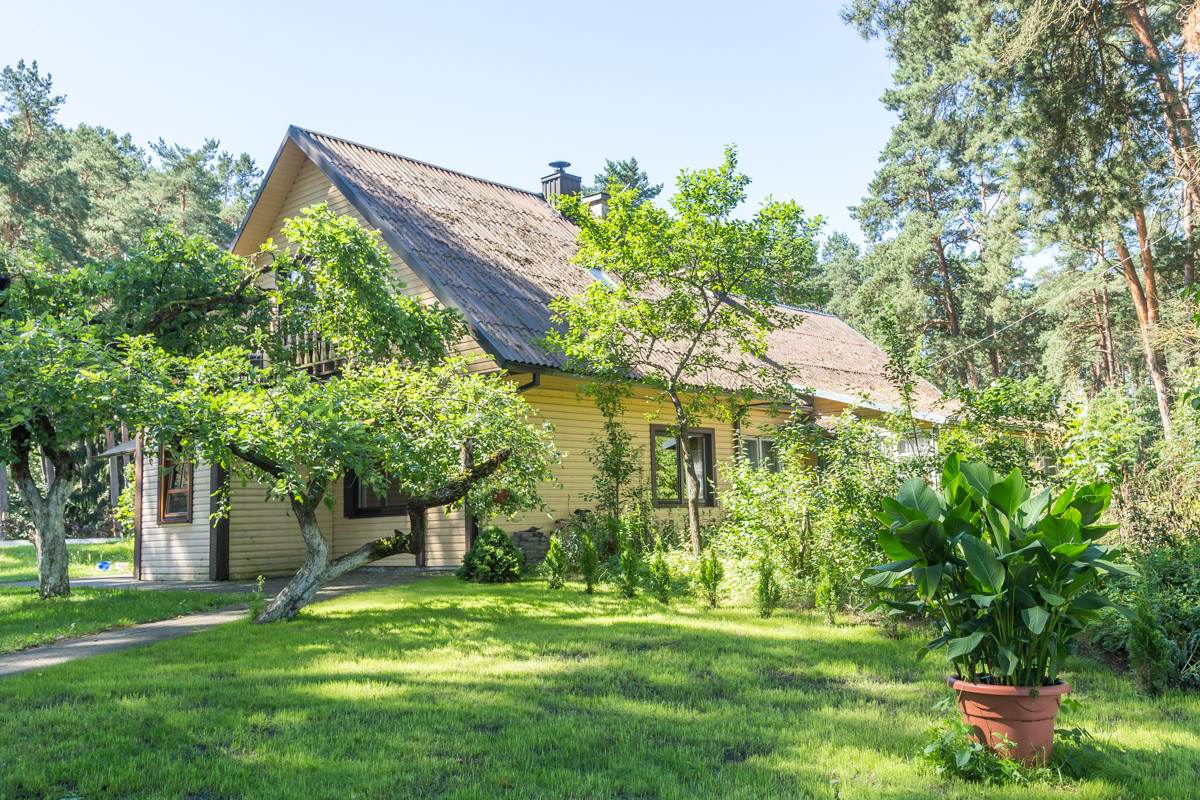 Jonas Biliūnas is a Lithuanian prose writer, a pioneer of lyrical prose in Lithuania. For a while he lived in Kačerginė in 1906 at the current address of J. Biliūno str. 14.

“The house where I have just arrived is situated in the forest. It is a beautiful summer house. It is surrounded by fragrant pine trees and spruce trees dozing in the open air, and a few steps away a cool river flows... I promise to stay here all summer in search of health...” – This is how J. Biliūnas wrote about his house in Kačerginė in his short story “Liūdna pasaka” (“Sad Story”). 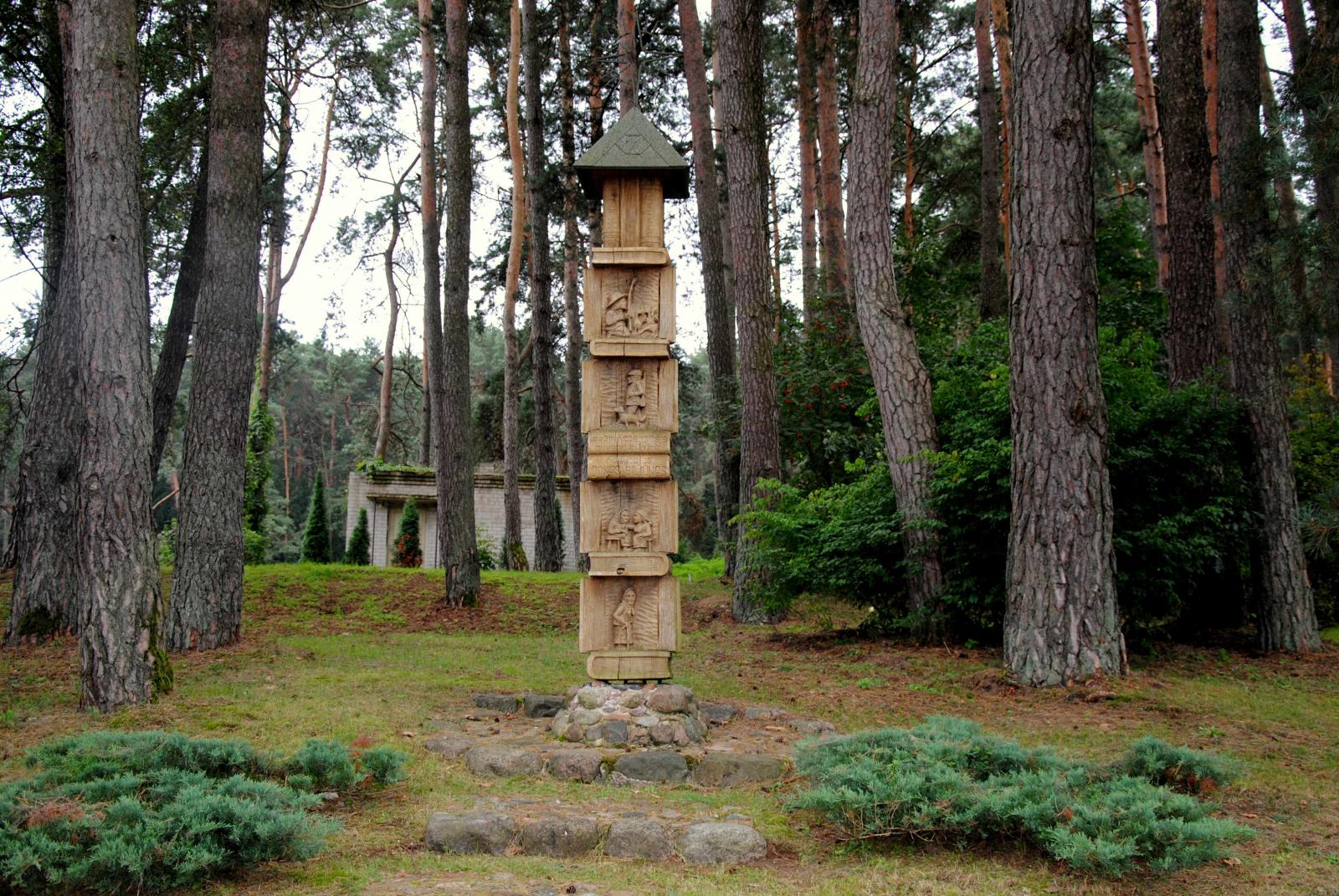 To commemorate the 130th anniversary of Jonas Biliūnas‘ birth, a 3-metre oak shrine was made in 2009, depicting the pages of books with the characters of the writer‘s stories.

Jonas Biliūnas was a 19th- and 20th-century Lithuanian prose writer, publicist and a pioneer of lyrical prose in Lithuania. The writer lived in Kačerginė for some time and wrote his popular short stories. The idea for the short story “Liūdna pasaka” (“Sad Tale”) was also written in Kačerginė. 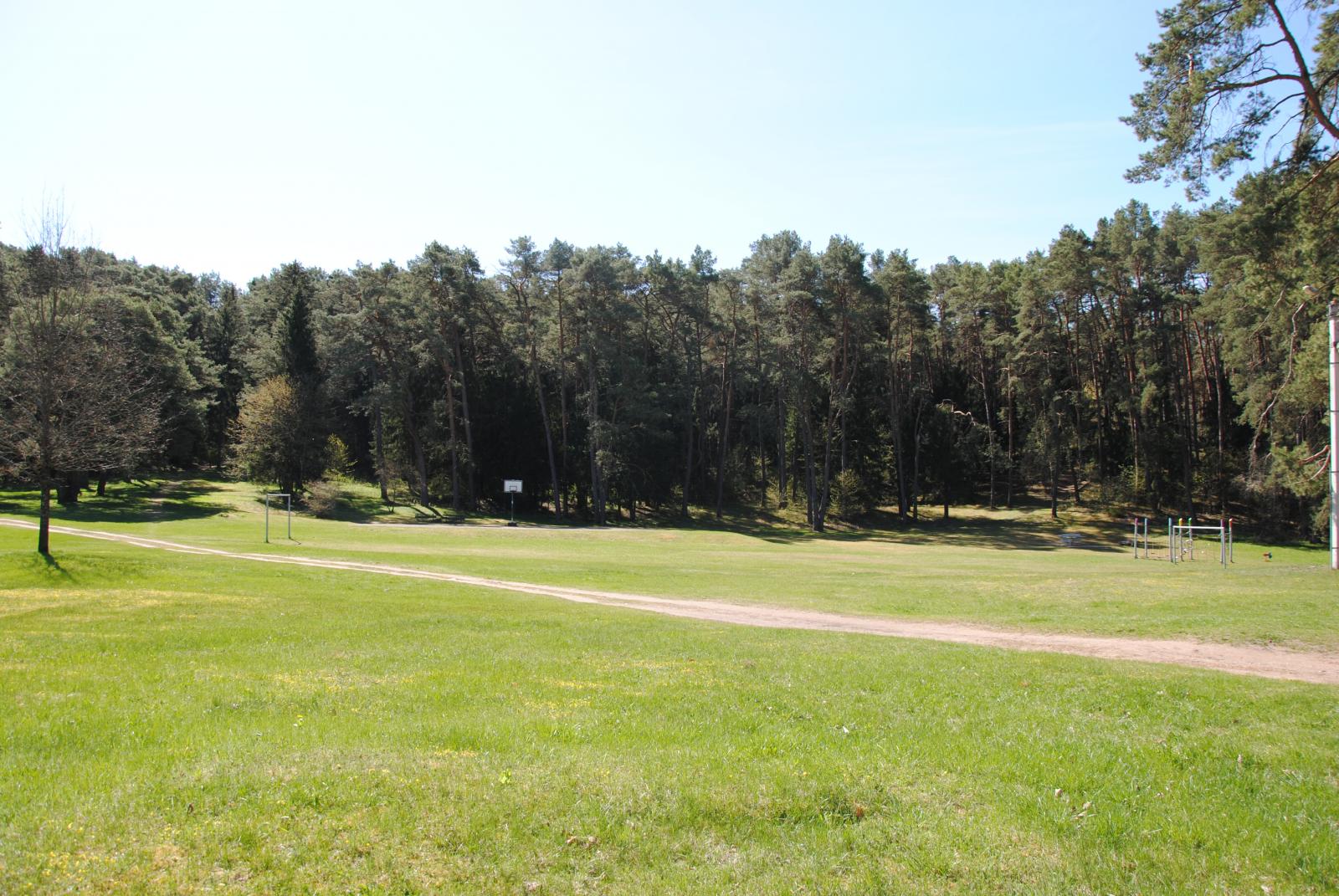 At the beginning of the 20th c. there were two outing squares in Kačerginė. Both were very popular among local residents and summer visitors arriving by the steamer.

At the foot of the pine-covered hill there was a stage, a platform for a brass band, benches for spectators and a stone altar. The naturally excellent acoustics enhanced the sound of many song festivals.

The merry and noisy festivities eventually moved to the one square that remains today and bears the name of Jonas Biliūnas. 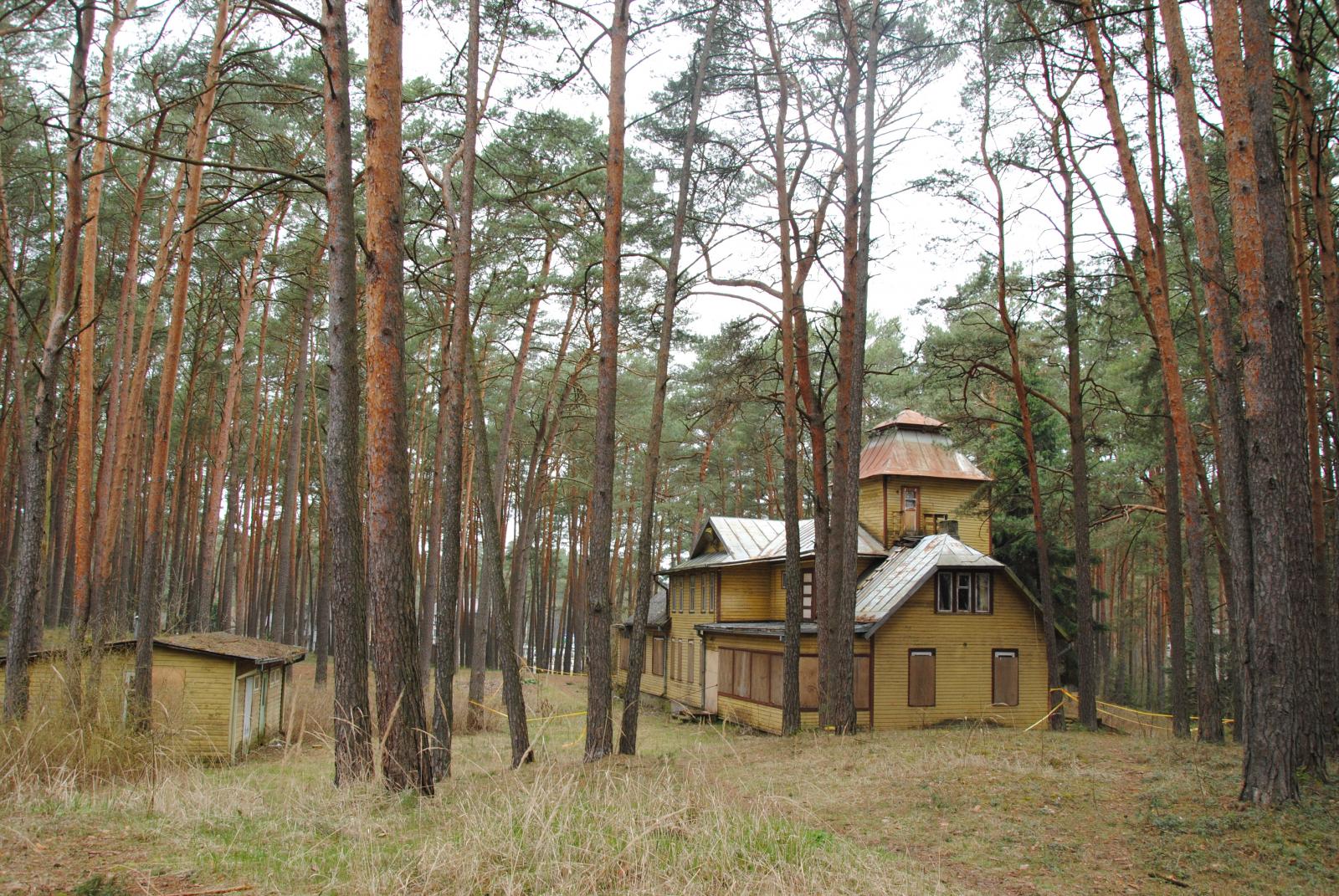 In addition to renting rooms, the landlady also provided catering services. Her son taught V. Kudirka, the creator of the Lithuanian National Anthem, to play the piano in the villa.

After the war, the villa was nationalised. 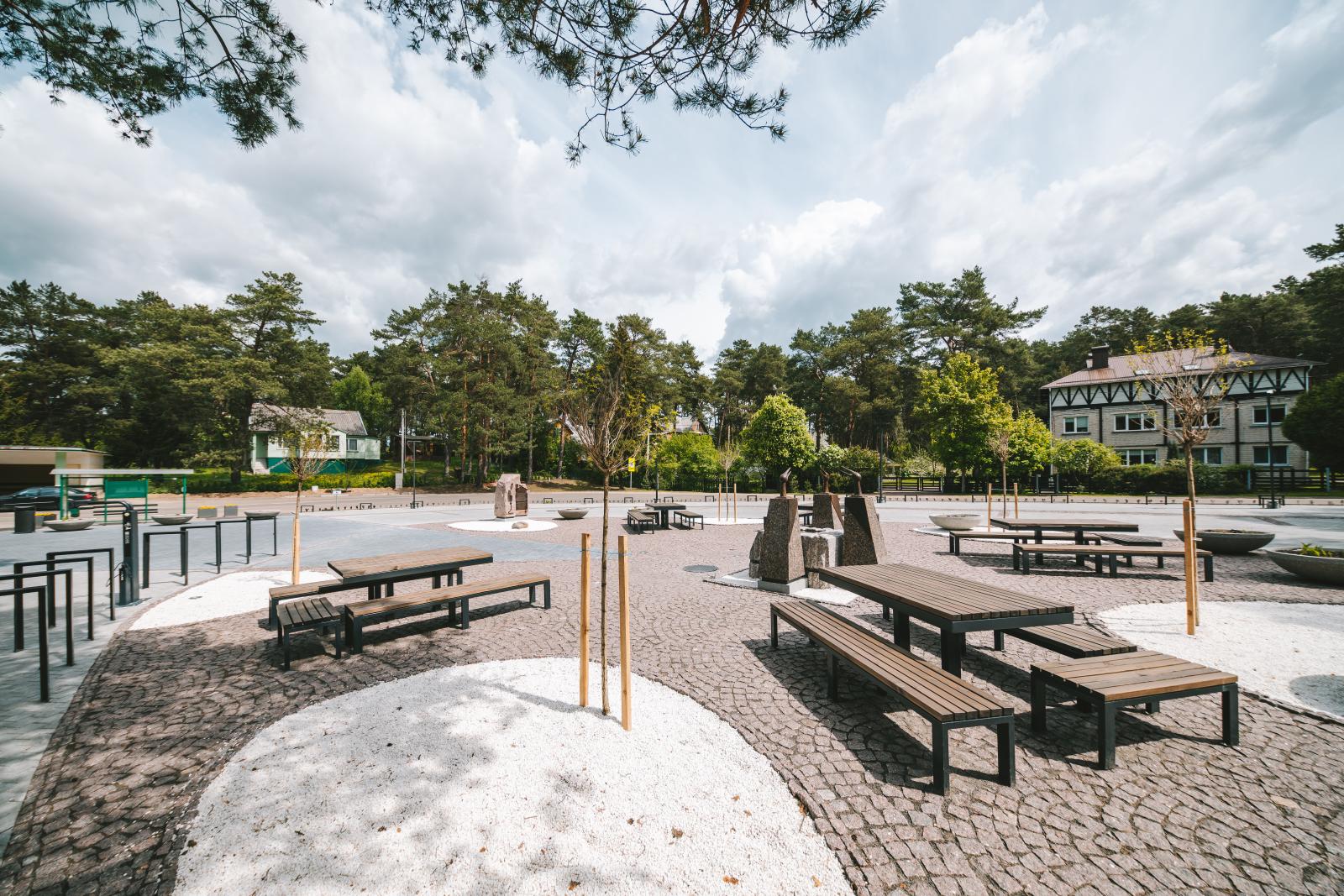 It is an important gathering place for Kačerginė residents and visitors which is located close to the Springs‘ Trail. The square features an artistic fountain of spring water.

You will find here a composition “Ryto paukščiai“ (“Birds of the Morning”) by Stasys Žirgulis and a stone stele “Amžių durys“ (“The Door of the Ages”) decorated with incandescent firewood, which introduces visitors to the town‘s legend.

The square has a seating area, a free car parking lot, an electric car charging station and bicycle stands. Writer, poet Vincas Mykolaitis-Putinas discovered Kačerginė late in his life. In this house he spent his summers in 1961-1967. He chose Kačerginė out of all the Lithuanian resorts because of its special silence and peace.

The residents who lived in Kačerginė at that time remember the poet very clearly: his gazes through the window and long walks in the forest. In Kačerginė, the writer translated Adam Mickiewicz‘s “Ponas Tadas” (“Pan Tadeusz), wrote memoirs, created new poems and managed the publication of his writings. 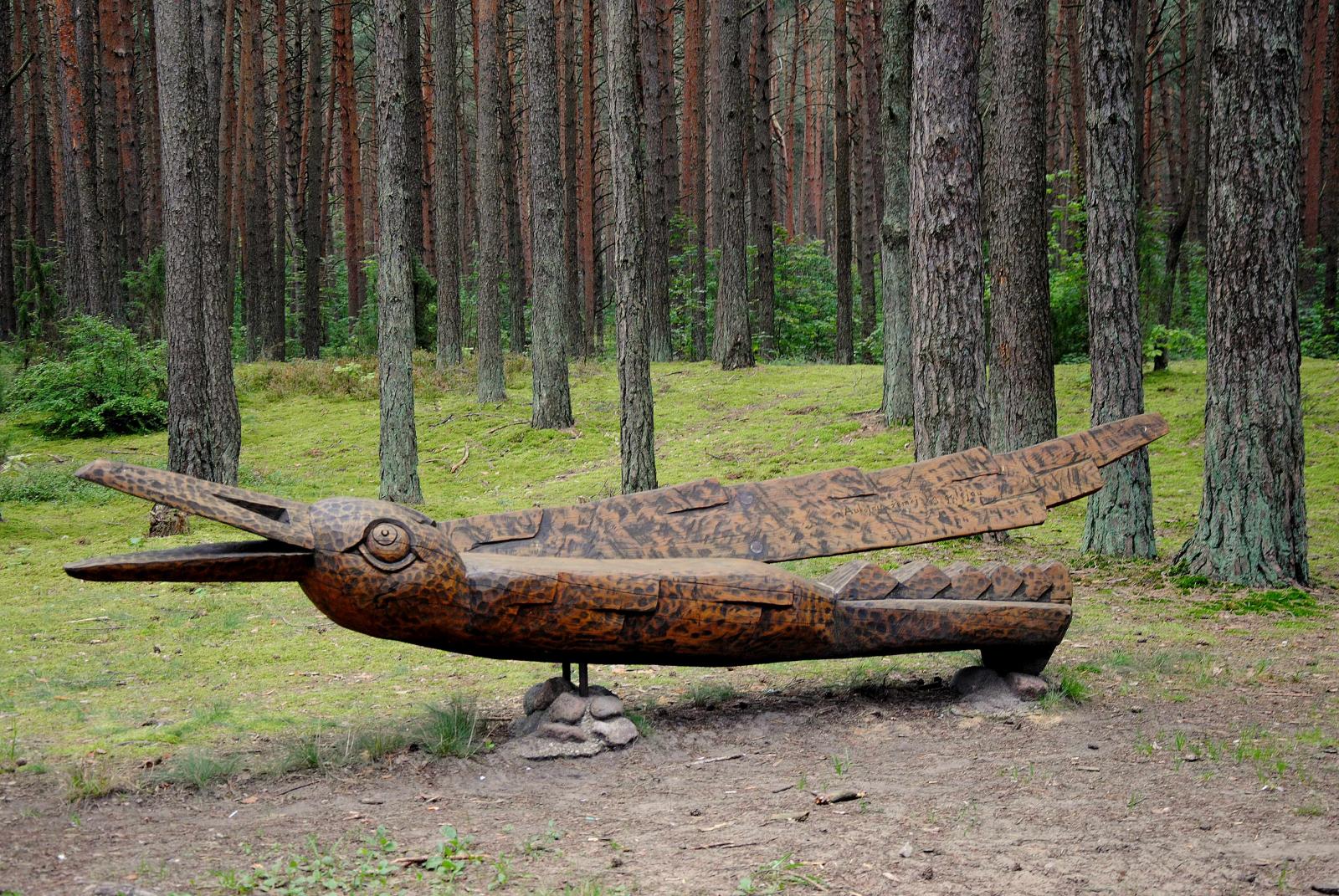 The park is considered to be the beginning of the Kačerginė Community Centre‘s project “Man and Nature. In Memoriam”. It was launched in 2008.The aim of the project is to preserve the memory of the writer V. Mykolaitis-Putinas and the town‘s cultural heritage, with a focus on increasing the community‘s unity as well as on educating of students. The poet‘s poems “Aukojau žemei” (“I Sacrificed To The Earth”) are engraved on the park benches.

Every year, the park hosts the celebrations of the international poetry festival “Poezijos žydėjimas” (“Poetry Blossoming”). 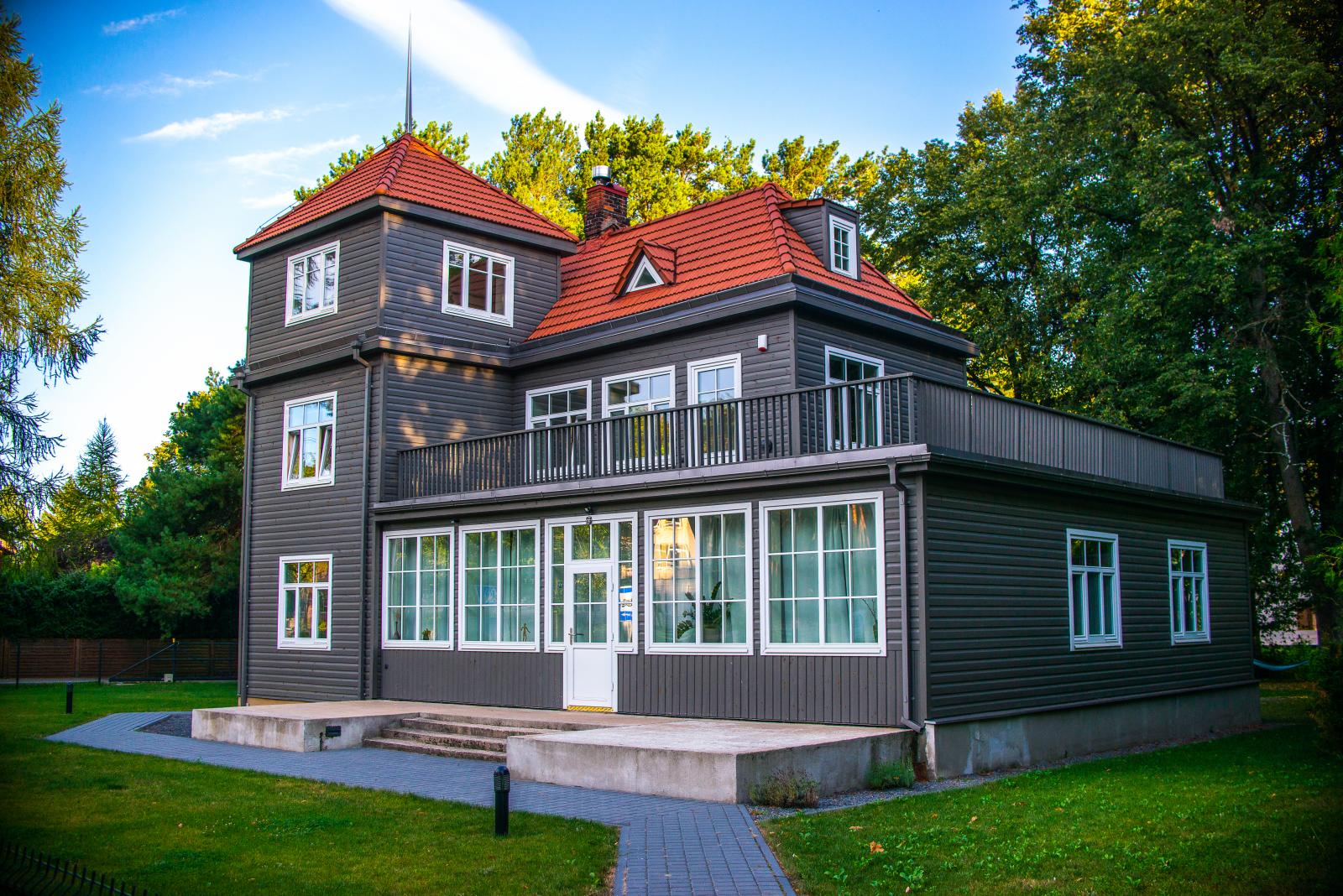 When Viktoras Reklaitis arrived in Kačerginė, he left behind one of the town‘s most striking villas. The villa is believed to have been built around 1935-1938 on Kačerginė‘s main street.

After the end of the inter-war period, for many years the building housed an ambulatory.

In 2016, the villa was renovated and became the home of the Kačerginė sub-district administration, which is happy to welcome tourists every day, as well as all passers-by who want to share the stories of Kačerginė. 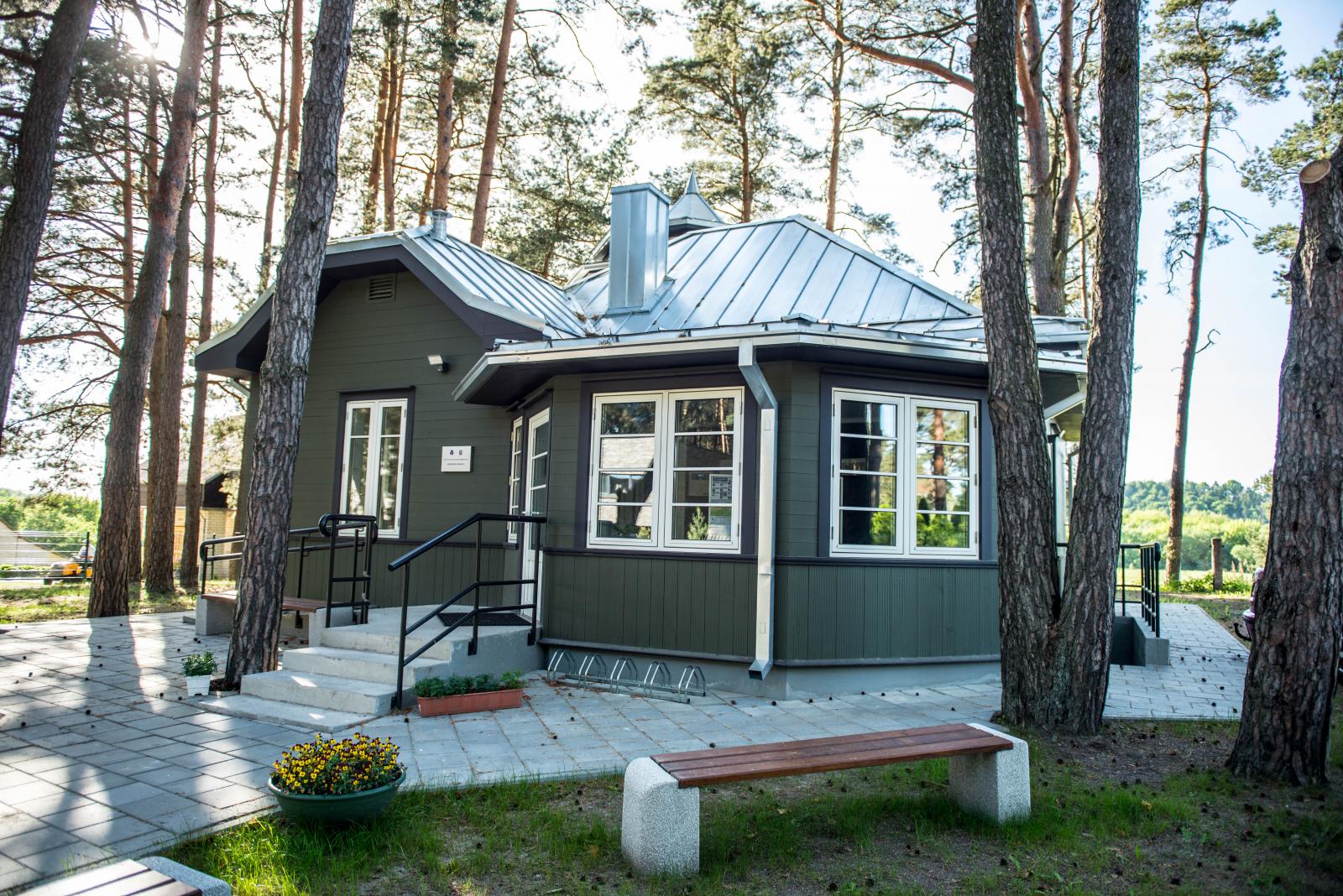 Pranas Vaičiuška (1876-1939), a physician, brigadier general and social activist, was a significant personality of inter-war Lithuania, who actively contributed to the creation of the country. He was the initiator of the construction of this villa and its first resident.

The villa, which was brought back to life in 2014, is today considered one of the most successful stories of revitalisation of cultural heritage in Kaunas district.

Today, it is a private residential house. You can visit it only from outside.

Leisure in the nature 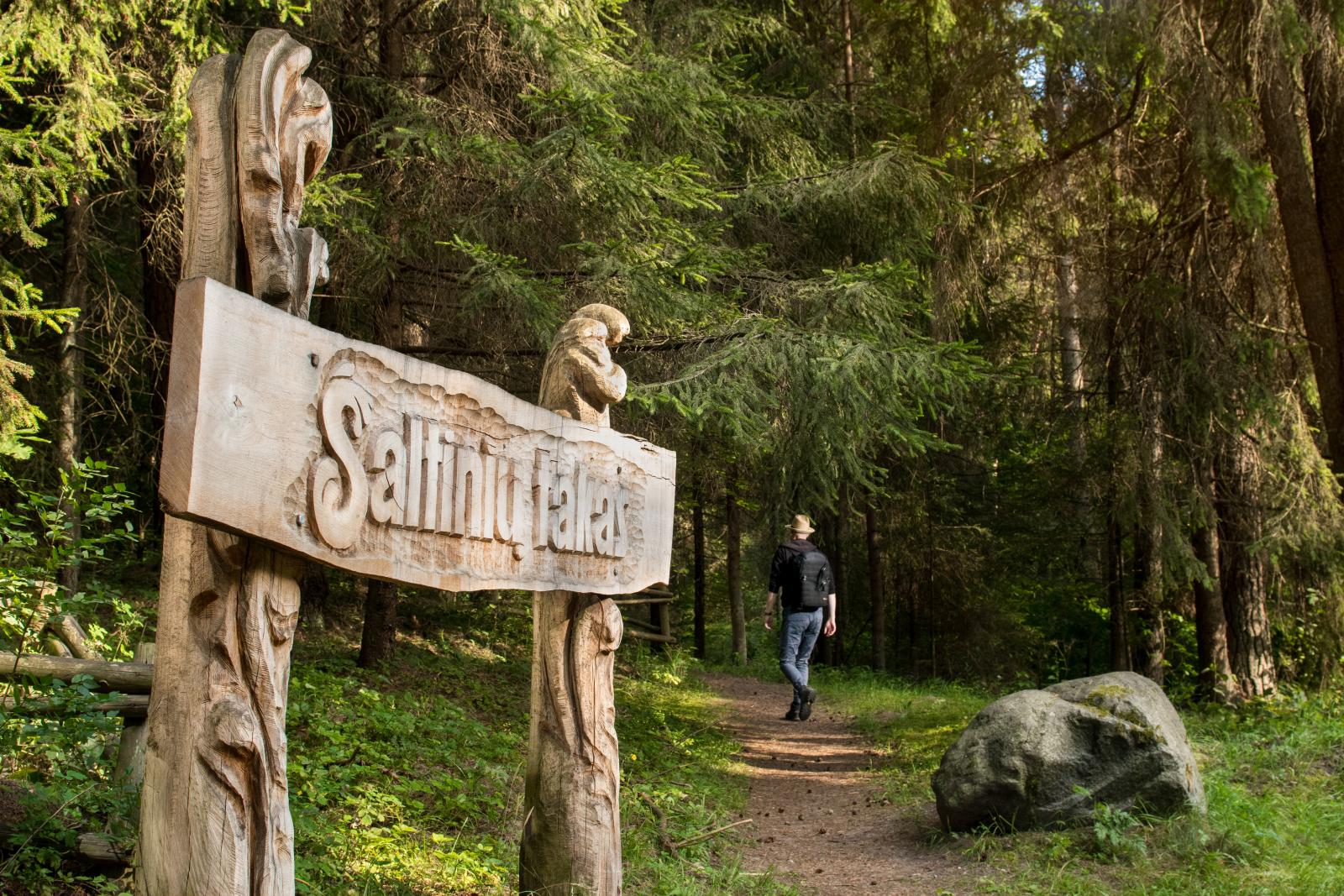 Springs‘ Trail is a 6 km long hiking trail through the picturesque Kačerginė forest.

Along the way, you will pass dozens of anthills of various sizes and shapes, fox and badger caves, get to know the core habitats of the forest, visit four lookout points, which offer magnificent views of the Nemunas river and the Pypliai Mound. The whole route is marked with white posts to show the direction.

There is a free parking and an information stand nearby. 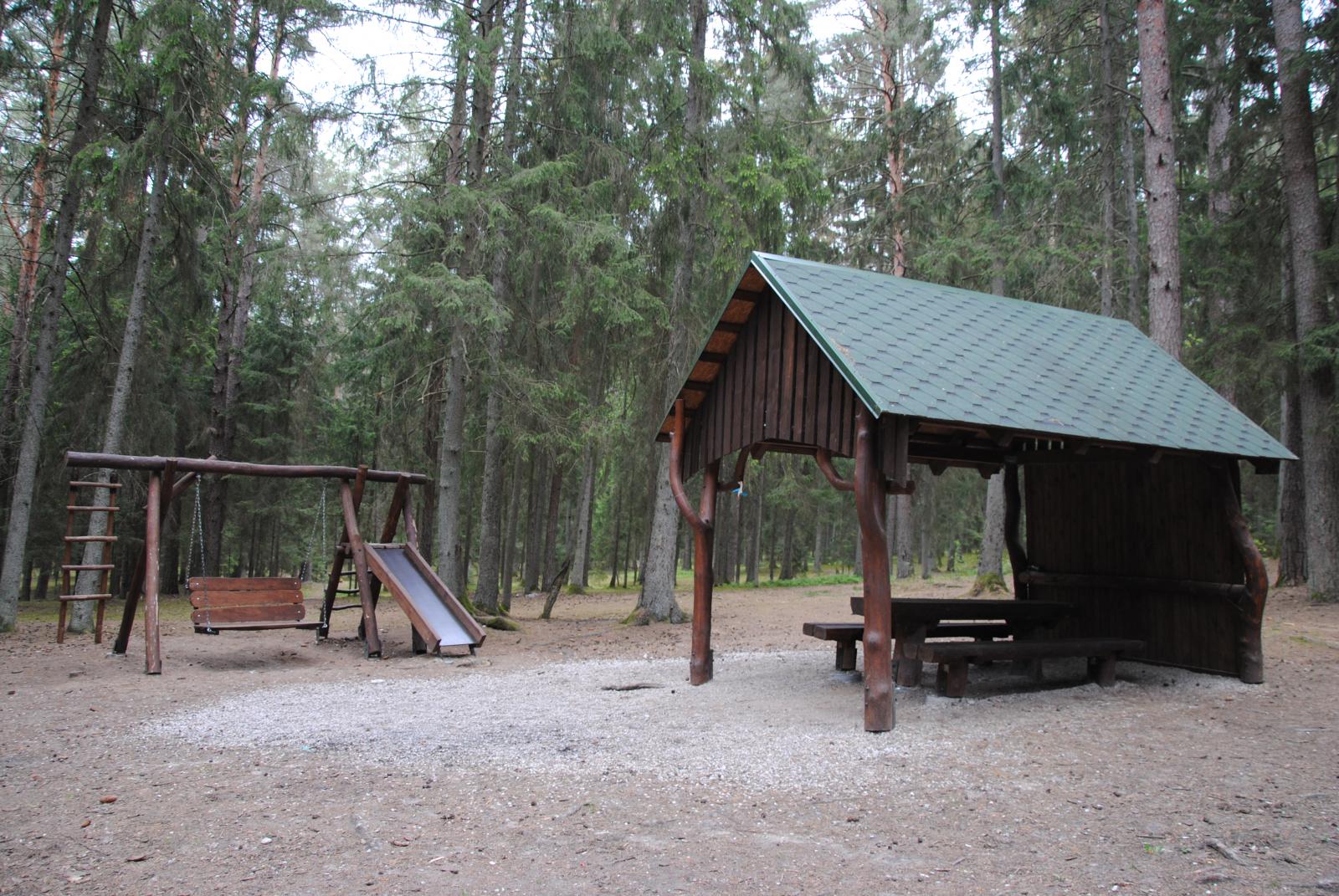 You will find a shelter, outdoor furniture and various attractions for children at “Barsukynė”. In winter the resort is popular among skiers because of its hilly terrain. Children can go sledding down the hills here as well.

There is a spring of clear water and a small pond with a bridge near the stop. 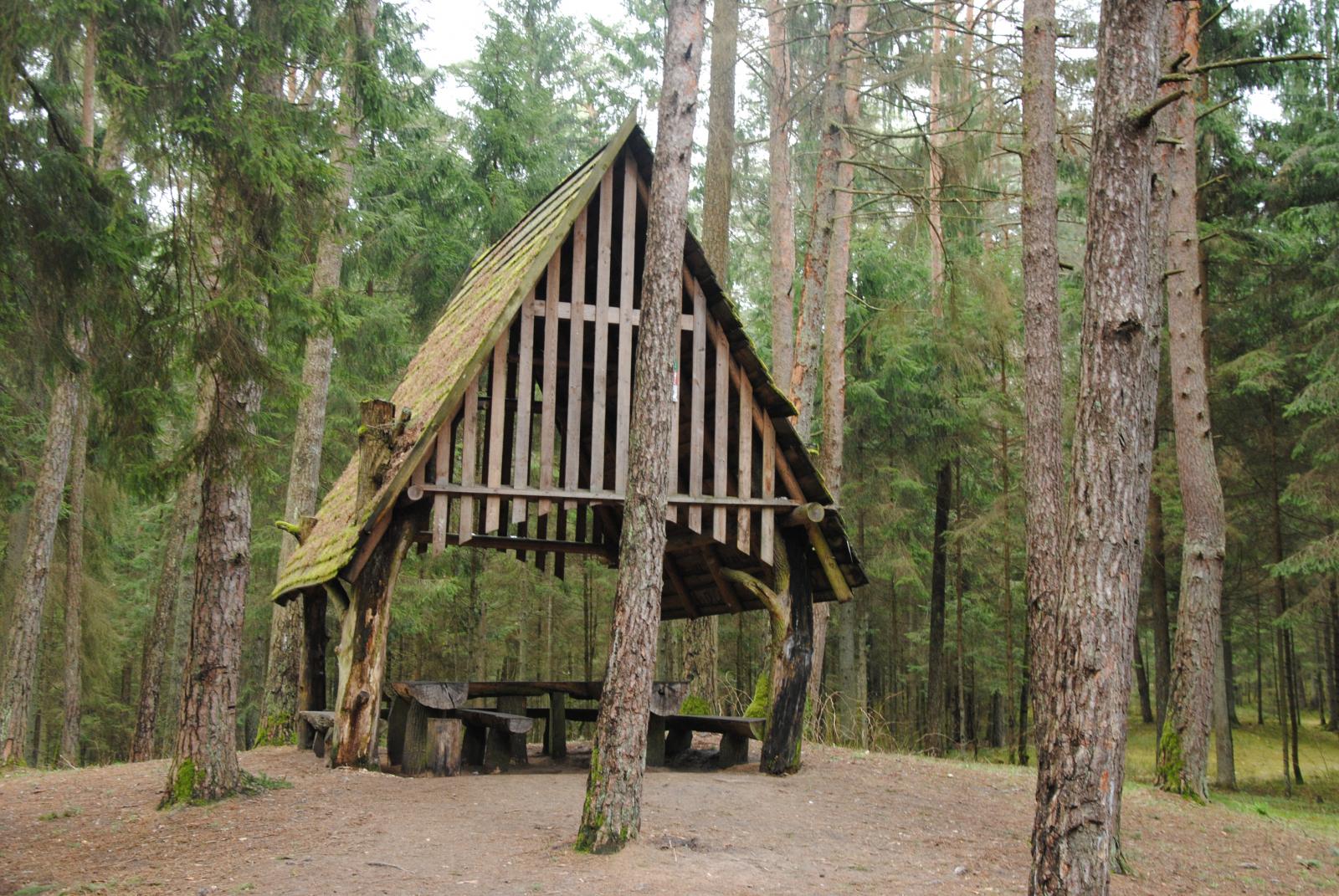 The spacious rest stop is surrounded by a beautiful pine forest growing on hilly terrain. The stop is accessed by the Kačerginė road. The place has a beautiful shelter, outdoor furniture, garbage bins, a fireplace and various attractions for children.

The rest stop is very popular among the inhabitants of Kačerginė and the surrounding villages. It is the venue for the Midwinter Festival, Earth Day, the Birds‘ Reunion Festival and other events.