Welcome to Kulautuva – a town worth to discover! 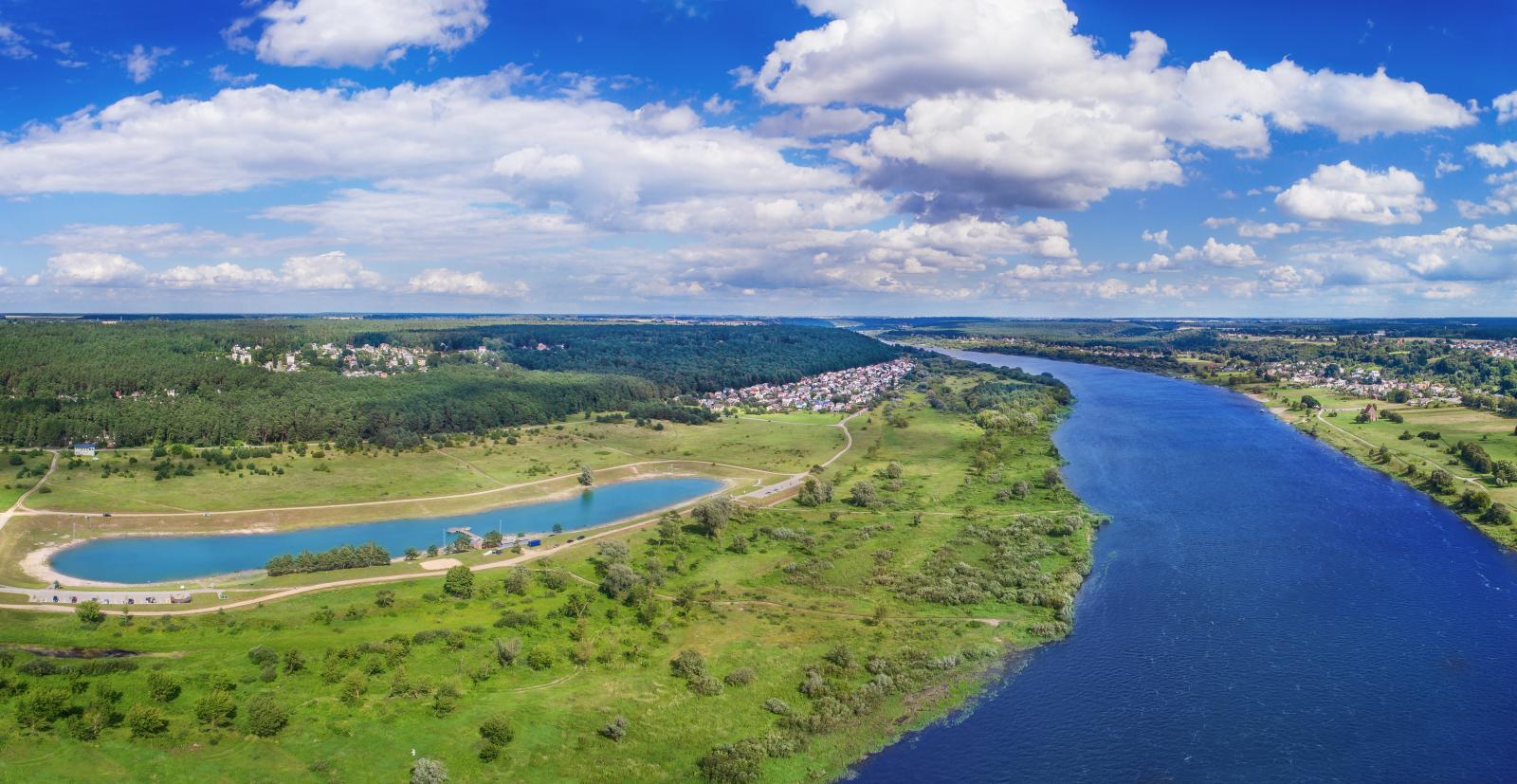 Kulautuva is a town by the river Nemunas in Kaunas district. In 1933 it was declaired Lithuania‘s first health resort. People from neighbouring countries, Canada, America and even Bolivia came here to improve their health. At that time Kulautuva was particularly popular among Jewish tourists. Foreign doctors and guests used to say, “... If the weather in Kulautuwa doesn‘t cure you, nothing and nuobody will”. German doctors wondered why would they have to go to distant countries for treatment if Kulautuwa was within an easy reach.

Many politicians, artists and foreign diplomats of the Lithuania‘s temporary capital (Kaunas) had their summer homes and spent holidays in Kulautuva.

Circular routes are set up for hiking along the trails of 2 to 6 km long through hilly and winding pine forests. Kulautuva‘s mineral water buvette welcomes everyone passing by for a minute of refreshment and relaxation.

Many tourist attractions invite you to discover the history and spirit of the town that was once a luxurious resort. 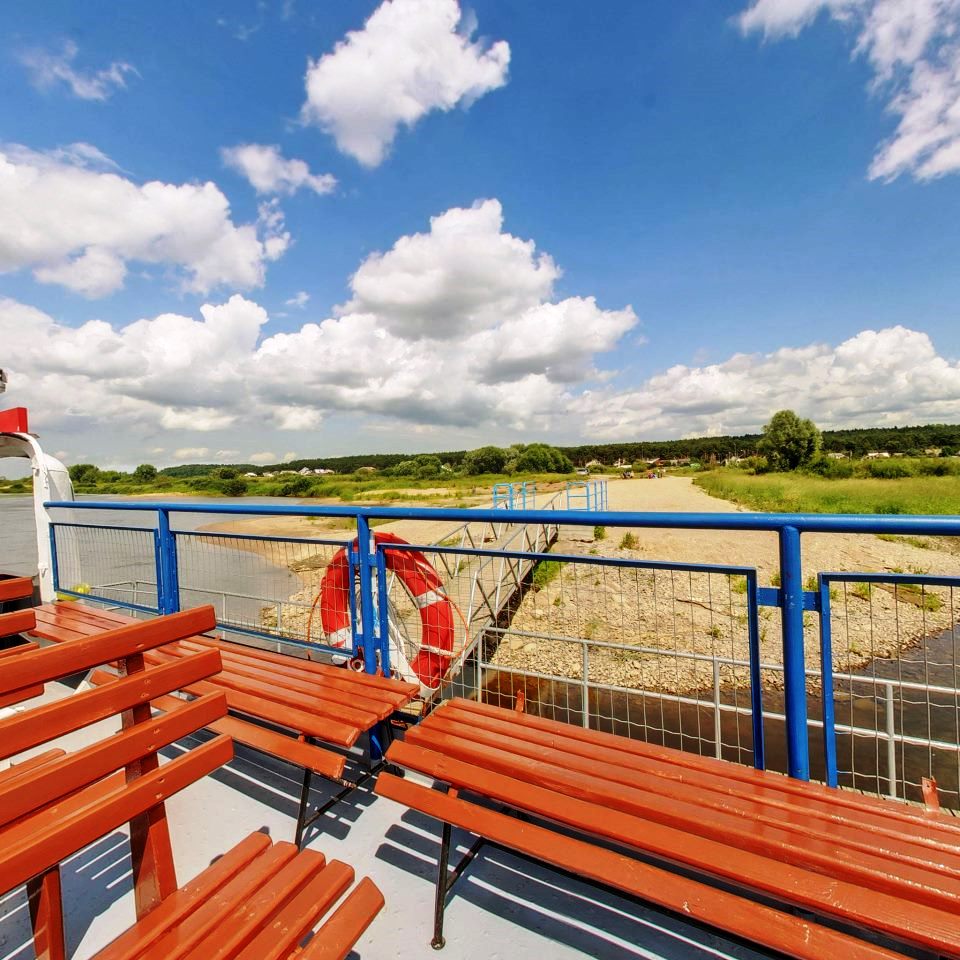 The pier is intended for bringing the tourists who travel for sightseeing and entertainment purposes when visiting Kulautuva.

A 25-seater ship “Zapyškis” arrives at this pier every summer. It carries passengers along the Kaunas district towns Zapyškis, Kačerginė, Kulautuva, Vilkija which are situated by the river Nemunas.

Next to the pier, you will find the sculpture “Uoste šuolis” (“Jump In The Port”) by artist D. Karaliaus.

2. OBJECT OF SMALL ARCHITECTURE “UOSTE ŠUOLIS” (“JUMP IN THE PORT”) 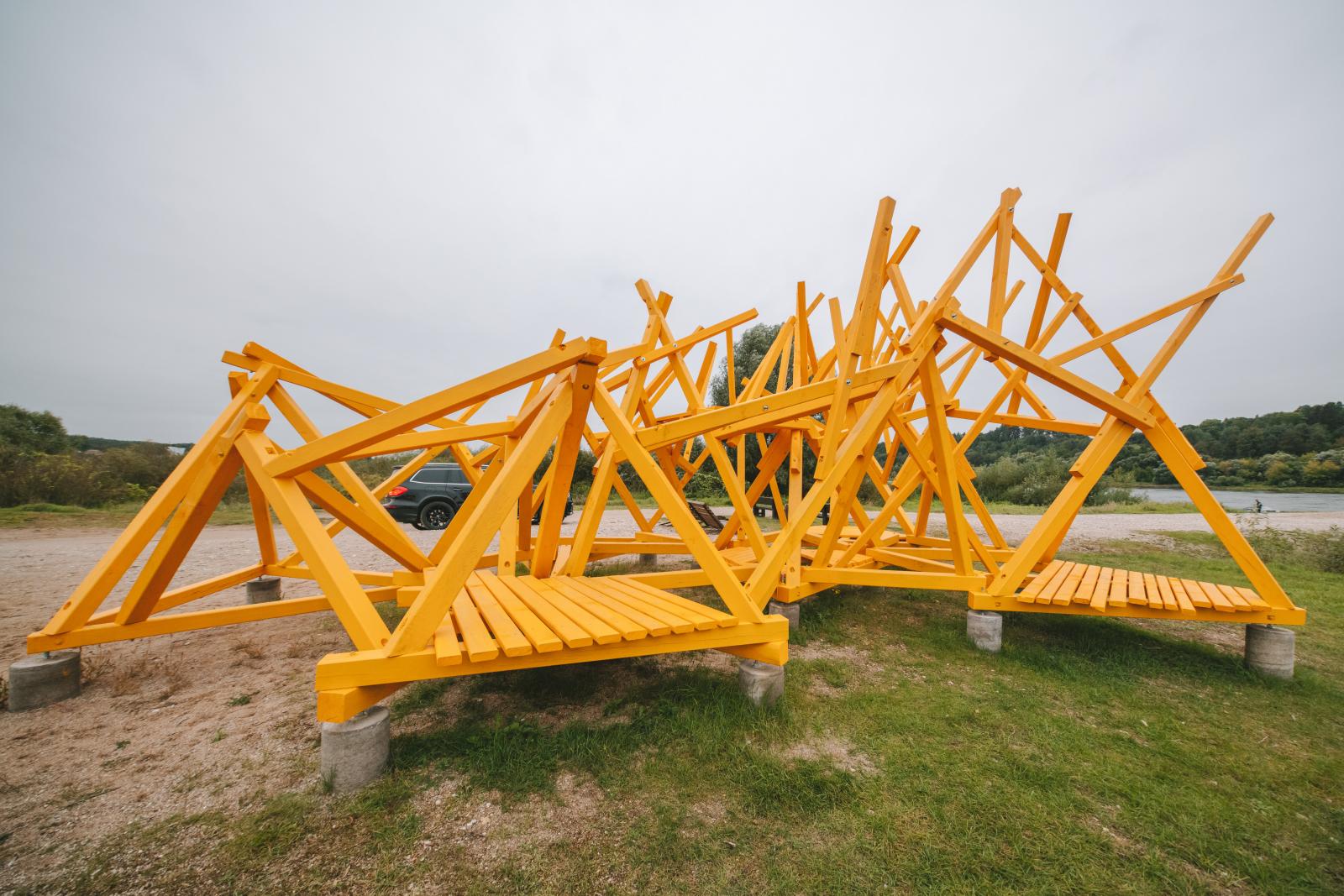 Sculpture “Uoste šuolis” (“Jump In The Port”) has become a signpost not only for those sailing down the Nemunas. It is not just a visual, decorative object in a structure reminiscent of straw gardens. It is also a meeting place.

In the spring of 2021, the artist and architect D. Karalius started his residency in a resort town in Kaunas district and worked on this small architectural object until autumn. 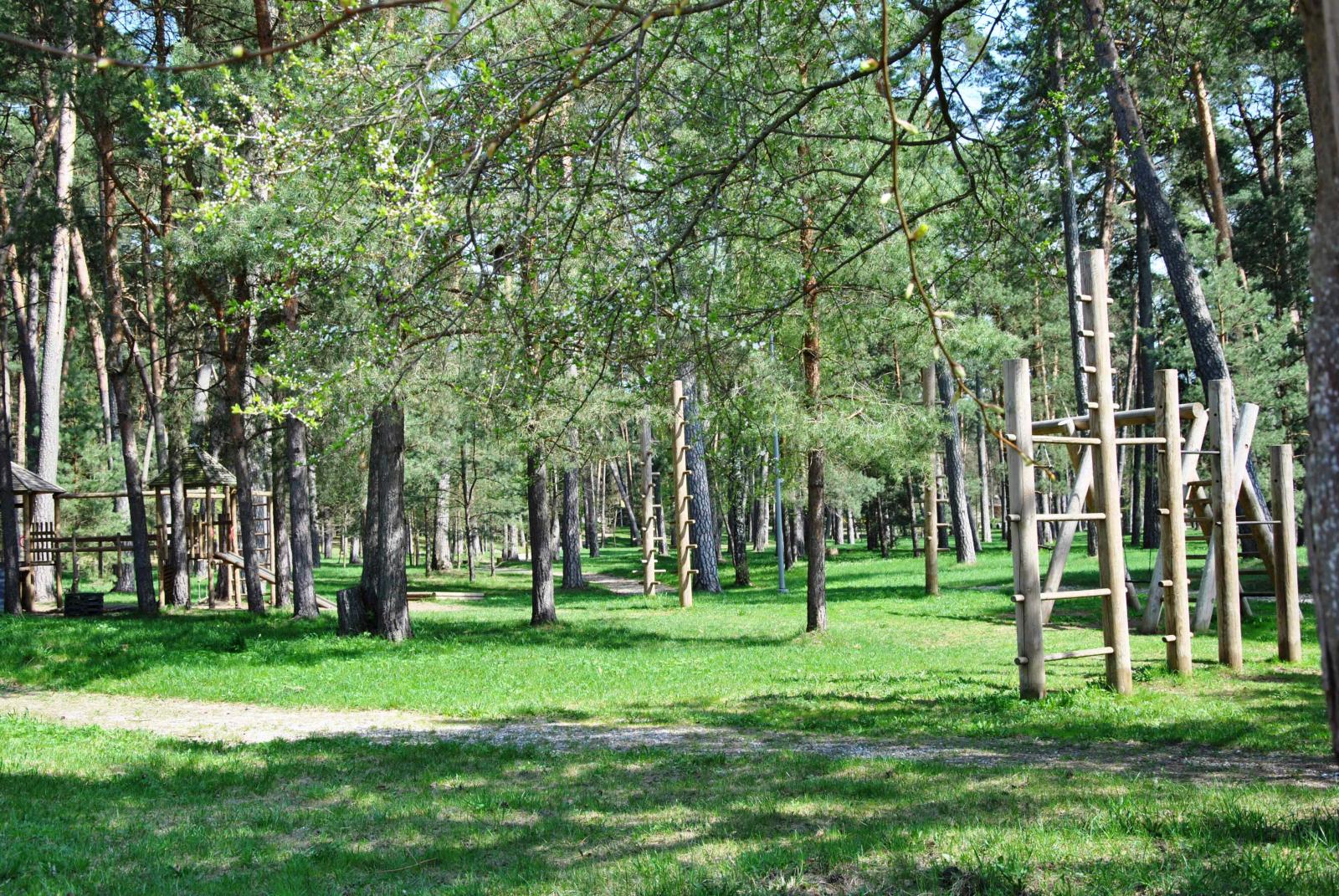 Every year, in July, the well-known singing poetry festival “Acacia Alley” takes place in this park. The festival is beeing organized in Kulautuva since 2001.

The park has a 30-meter barefoot trail, a children‘s playground, hiking trails, and parking spaces nearby.

Here you will find unique sculptures dedicated to the festival “Acacia Alley” a piano overgrown with moss, an acoustic guitar, a chair with a crown. 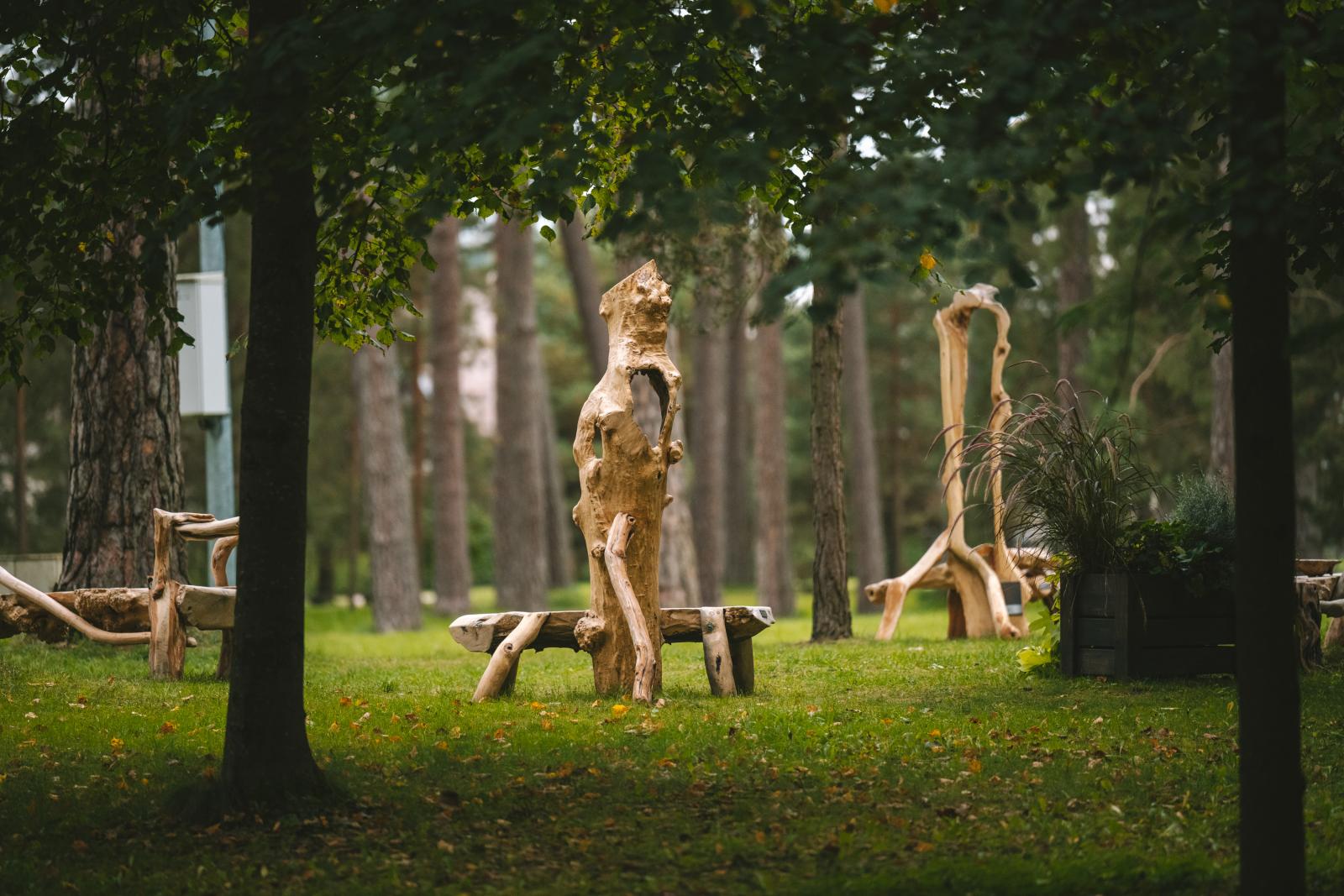 Acacia trees are a particular highlight of Kulautuva. In 2021, some of the acacias had to be cut down. The local community did not want to lose them and decided to create a space with the sculptures made of acacias. That is how a space of sculptural benches was started.

The idea was realised and the benches were created by the textile artist Gaila Akelienė. The local people themselves contributed to the creative process.

The community space is an important reflection of Kulautuva‘s identity and the community‘s connection to its living environment. 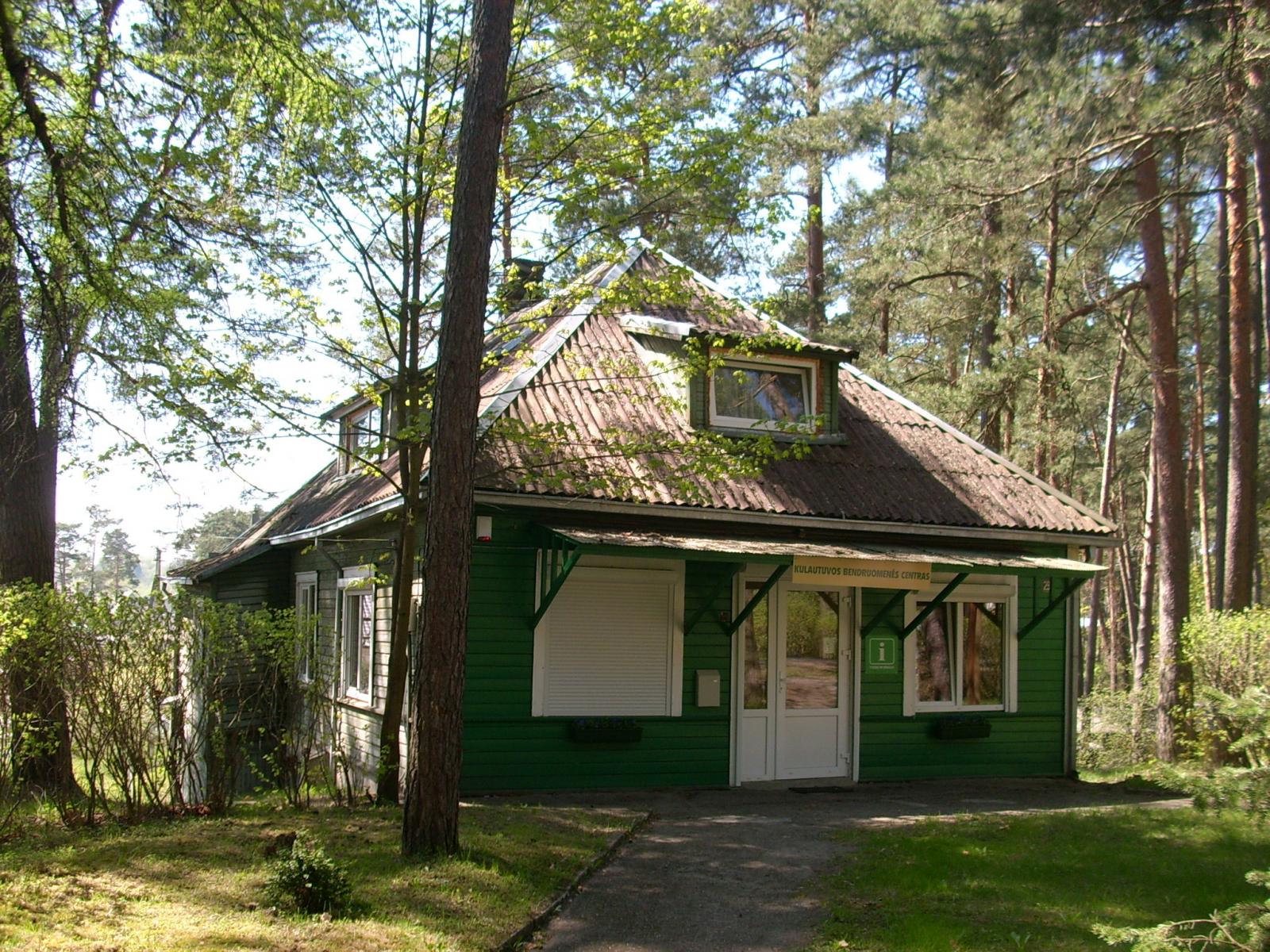 Lieutenant Colonel Vytautas Augustauskas lived in this house from 1930 to 1944. In 1933 he became the director of Kulautuva resort. The towns progress is associated with this person, who worked without remuneration.

The Kulautuva resort‘s plan was prepared on the initiative of V. Augustauskas, the streets were planted with linden trees and white acacias, a pond was dug, and a school was established.

The beautifully and comfortably arranged resort could compete with Palanga and Birštonas at that time.

Today, the house belongs to the Kulautuva community center.

6. SCULPTURE OF THE BLESSED VIRGIN MARY 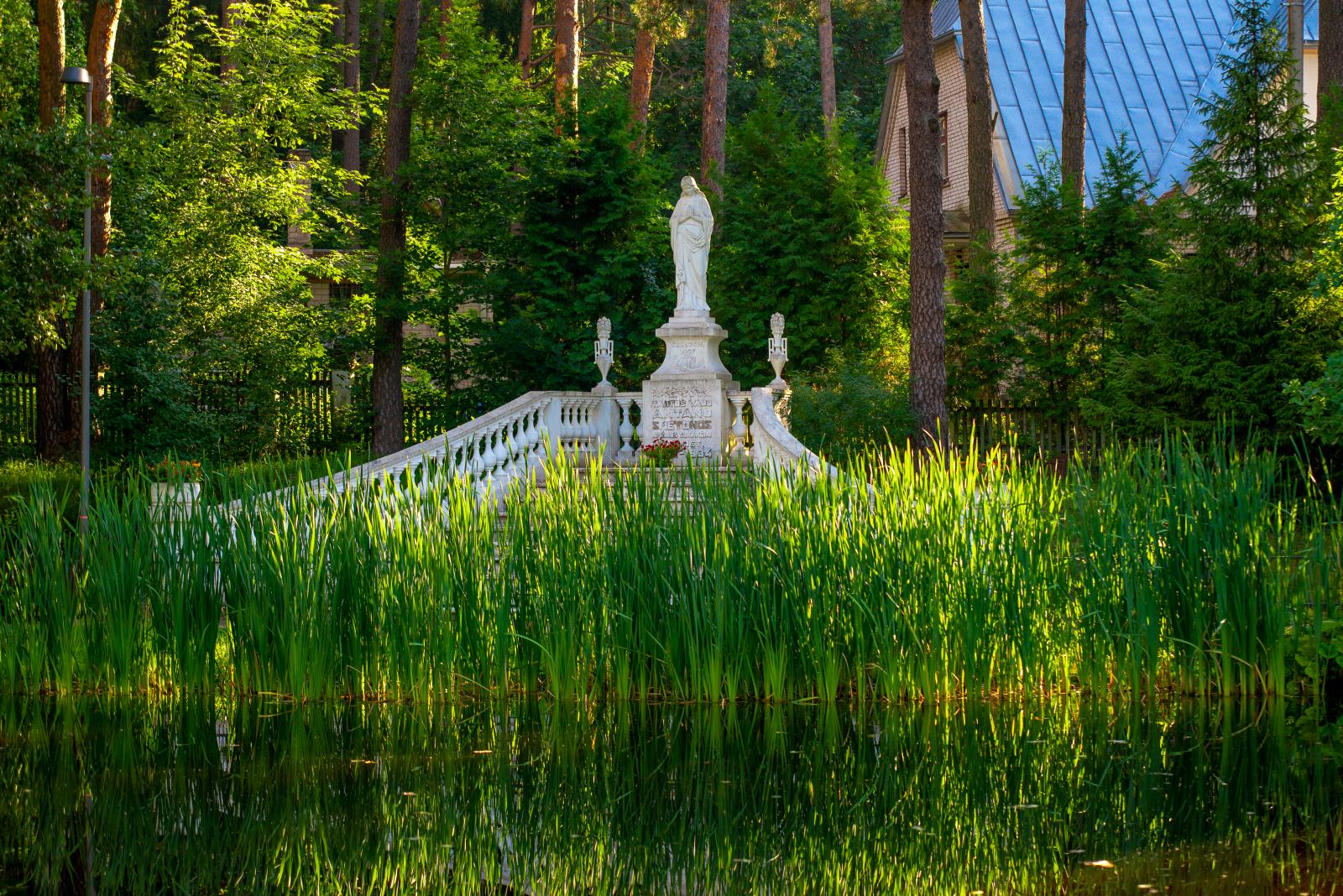 In 1934, on the occasion of the 60th anniversary of the Lithuania‘s President Antanas Smetona, the statue of the Blessed Virgin Mary – Madonna was presented to the public. The inscription on the sculpture says: “To commemorate the anniversary of the Leader of the Nation, Antanas Smetona 1874-1934”. The longest and most beautiful street in Kulautuva, named after the President (now Acacia Alley), was also opened to commemorate this anniversary.

The monument was dismantled in 1956 on the orders of the occupying Soviet authorities. The statue was moved to the churchyard and returned to its place by the Swan Lake in 1990. 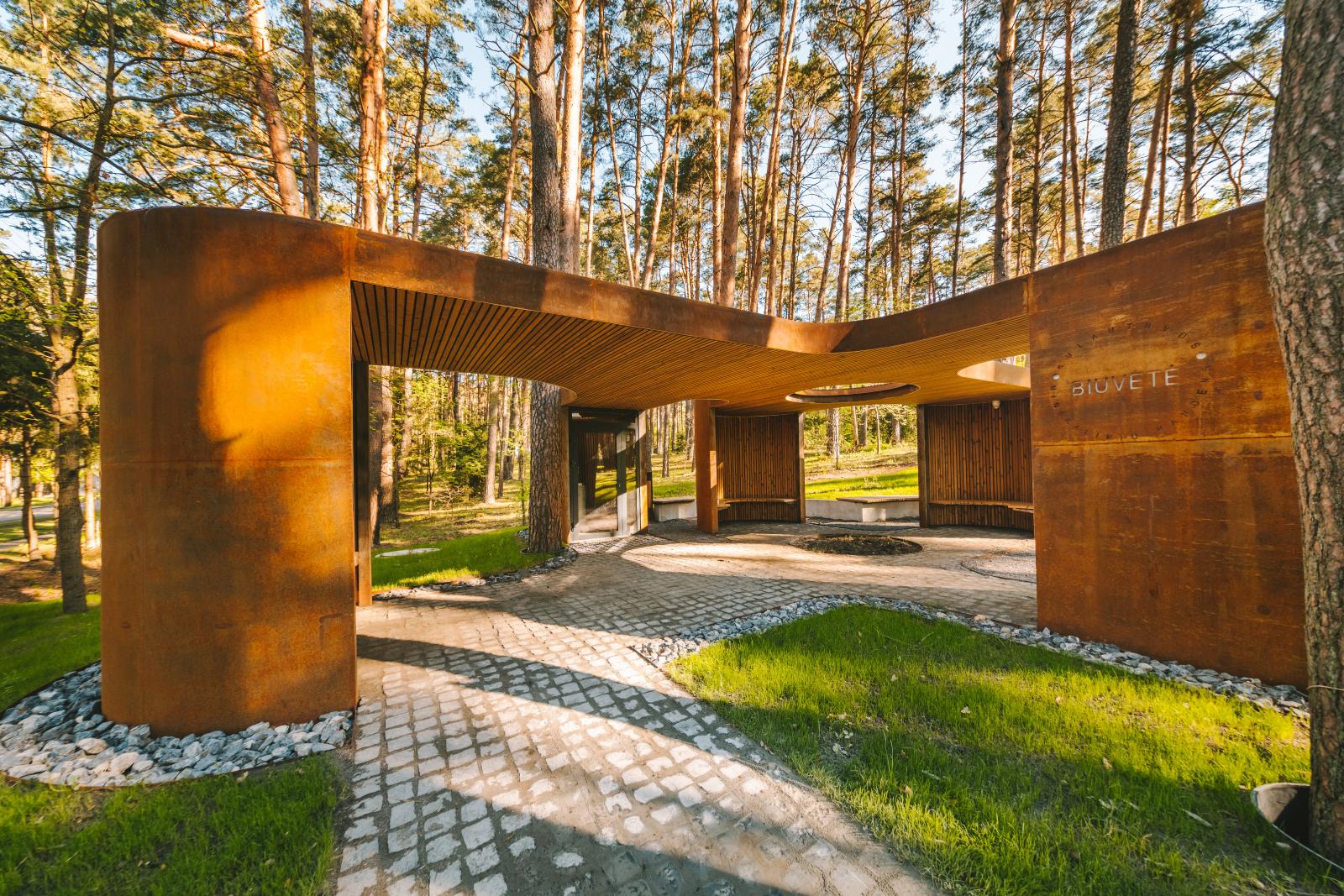 A 150-meter-deep borehole was drilled at the site several years ago. The water was tested and found to be of low mineralisation, very pure and clean. It was then decided to set up a mineral water buvette in Kulautuva.

The steel used for the buvette is Corten steel, which changes colour over time from orange to brown and blends in with the colour of the tree trunks. The area has been landscaped and adapted for disabled people, with benches and bicycle racks. The buvette is open all year round. 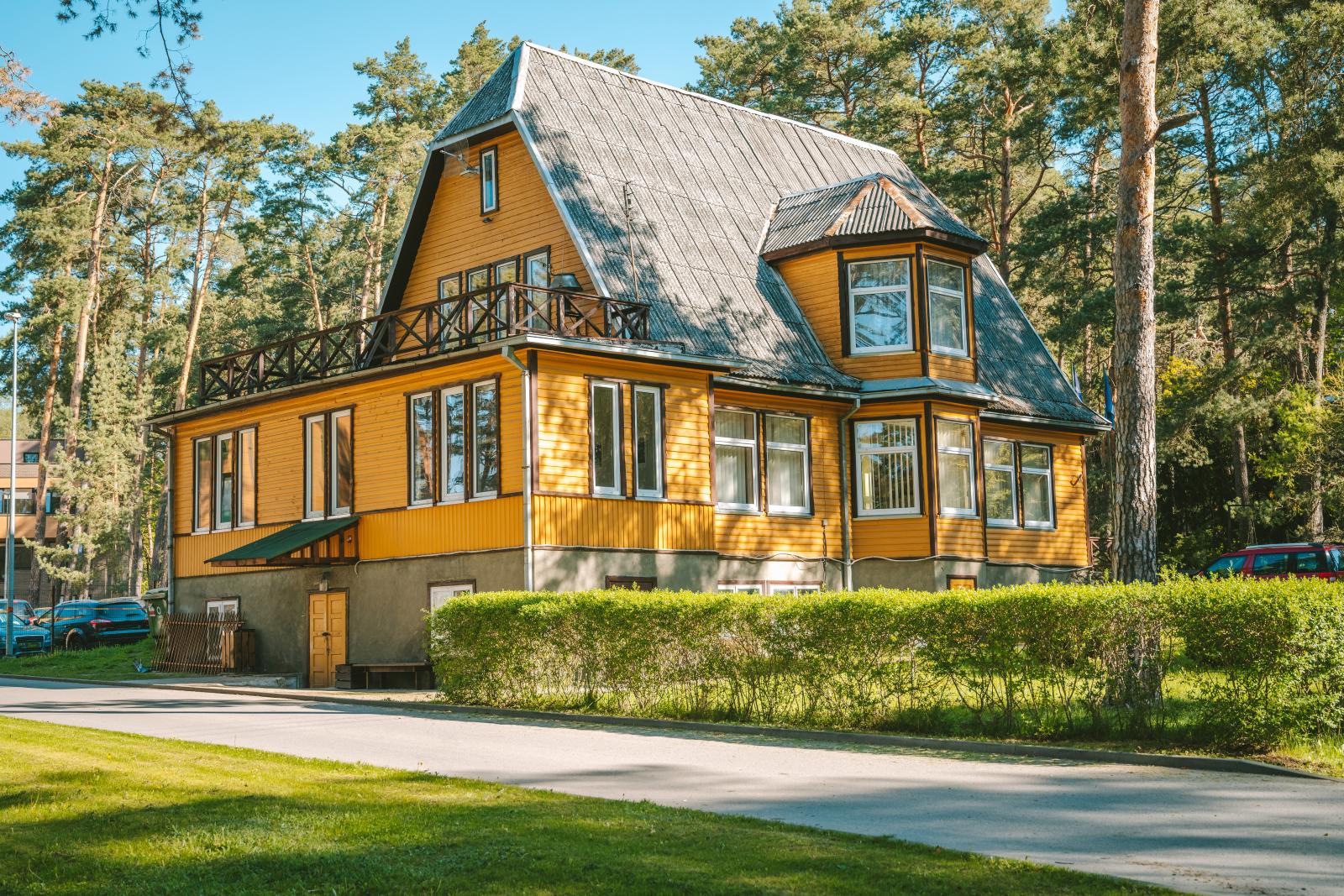 In 1934, an intensive construction phase began in Kulautuva. Modern villas and summer houses began to be built along the main street of the town. Several of them were built by the businessman Romanas Polovinskas, who became one of the most important figures in tourism business in Kulautuva. With the help of architects and engineers, R. Polovinskas started to build a café and hotel complex in the town.

When the Soviet occupation began, the property was expropriated. The family of Polovinskas moved west.

9. ROOFED PILLAR FOR THE FUGALEVIČIUS FAMILY 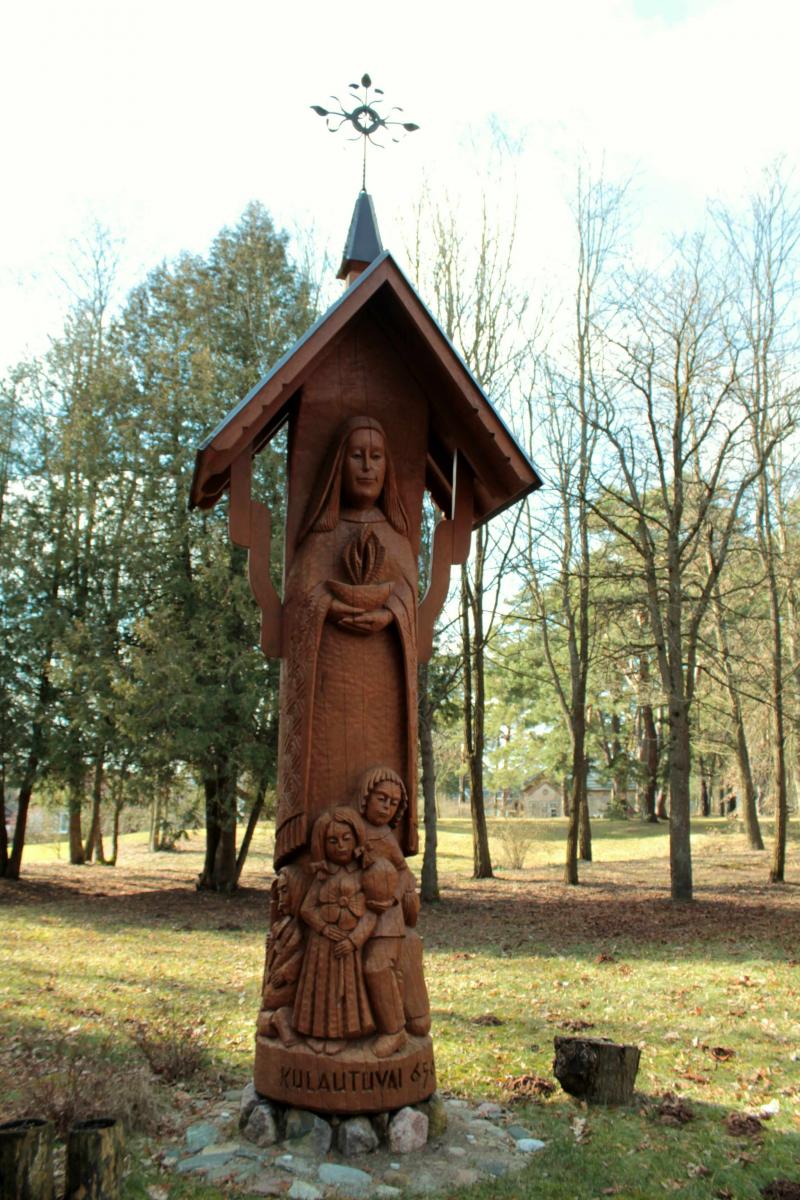 Before the First World War, the owners of the manor, Praskovija and Feodosijus Fugalevičius, built 21 summer houses and rented them to holidaymakers. During the war, most of the buildings were burnt down and the landlords and their four daughters moved to another estate near Minsk.

In 1922, their daughter Lidija, who returned to Kulautuva, opened a boarding house in one of the two remaining summer houses, and inherited the manor with her sister Liudmila and brother Sergei after the death of their parents. During the war, the family rescued children.

In memory of this family, the roofed pillar by A. Teresius was erected in 2014. 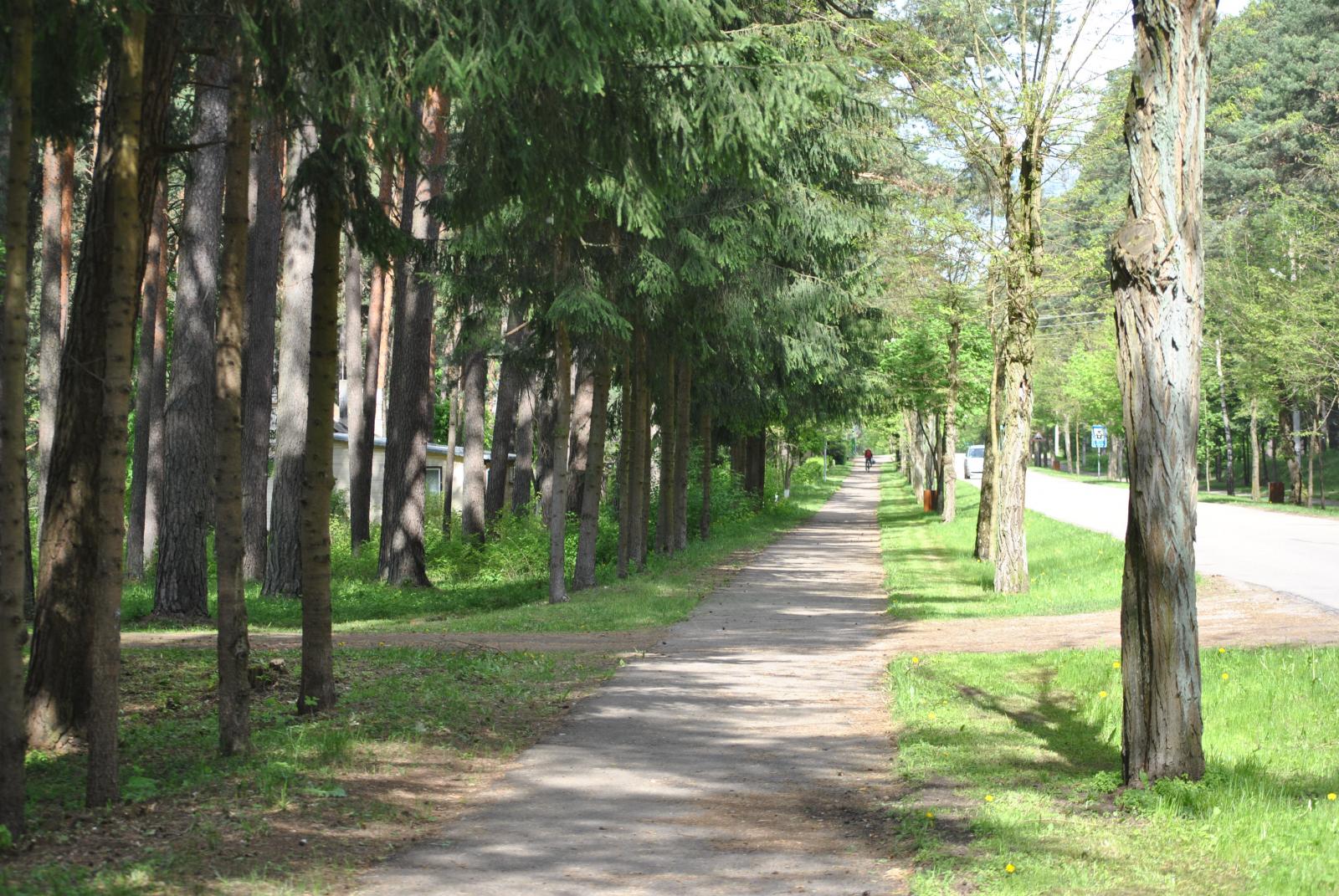 It is the main and longest street in Kulautuwa, which was named Smetona Alley in honour of President Antanas Smetona in 1934, who was celebrating his 60th birthday that year.

Back in the President Smetona‘s time, this alley was very well maintained. It was planted with young trees and was lined on both sides with splendid villas.

The main street of the town was constantly watered with special oil to prevent the dust and noise of passing vehicles, the edges were planted with young fir trees to muffle noise. 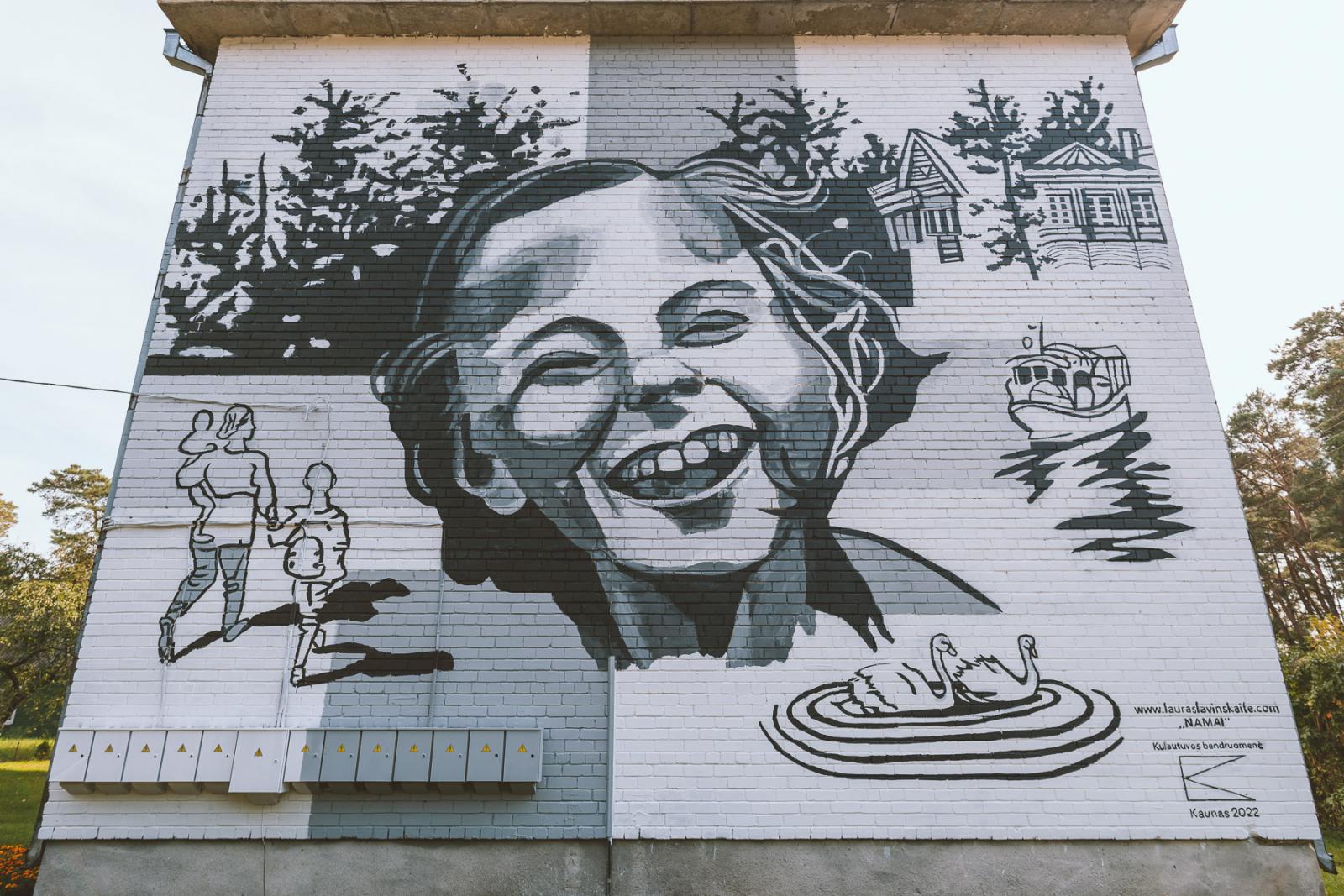 The main focus of the painting is a portrait of a smiling girl. It is a symbol of a happy resident of a town. It also represents the painful history of the Holocaust.

The girl is Rosian Bagriansky-Zerner, a Jewish girl hidden in Kulautuwa during the war. Rosian and other Jewish children were saved by Lidija, the daughter of the last owners of the Kulautuwa estate, the Fugelevičius family. The work also highlights symbols from other periods.

12. BELFRY OF THE CHURCH OF THE BLESSED VIRGIN MARY 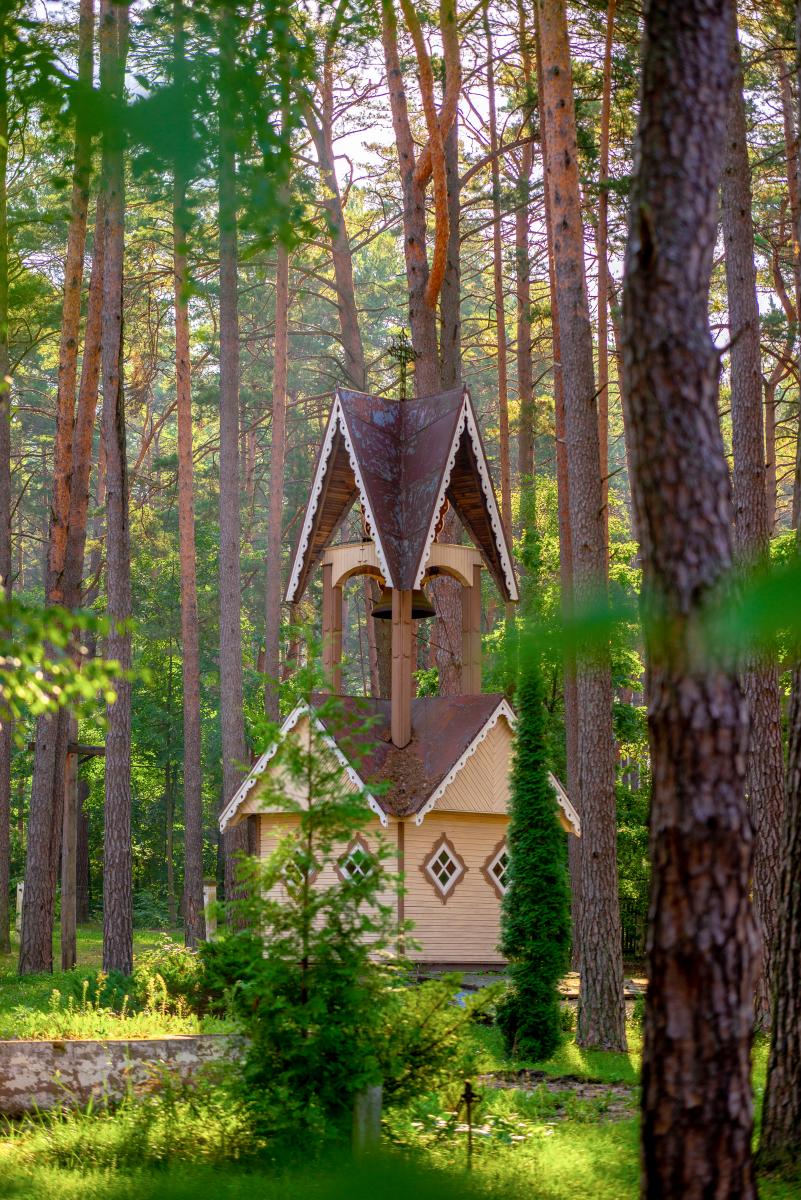 The nuns of the Working Sisters settled in the resort of Kulautuva in 1930. They founded a private chapel, which was converted into a church in 1940.

The bell tower, designed by architects H. Raugalas and S. Šimašius was built in 1987. Along with the church and the churchyard the belfry formed an integral ensemble. The belfry contains a late 19th century bell which was cast in Germany. The then rector of the church bought the bell for 1500 roubles and brought it to Kulautuva.

In 2012, the church was destroyed by fire. Only this wooden bell tower with folk architectural forms survived.

13. CHURCH OF THE BLESSED VIRGIN MARY 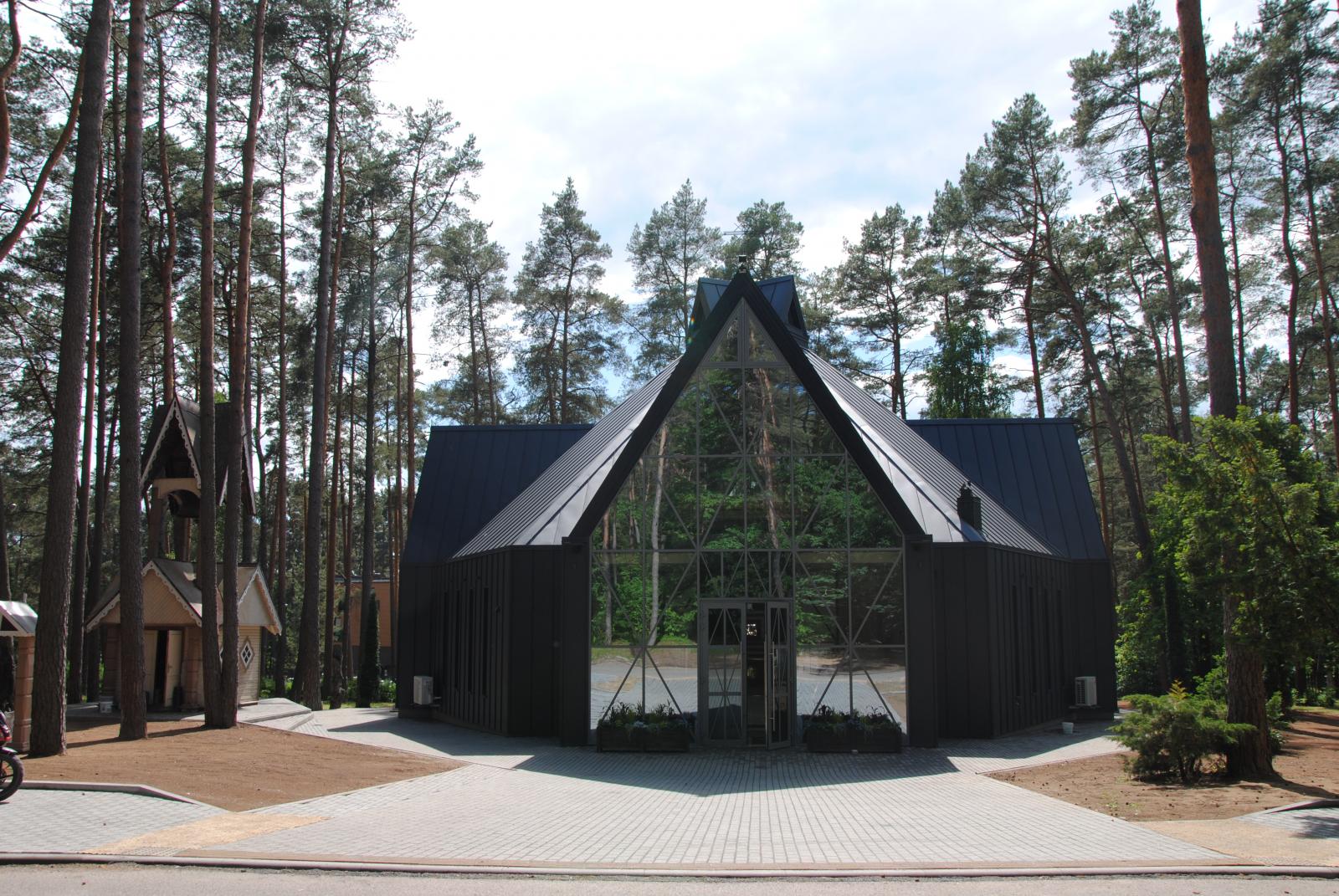 It is one of the youngest churches in Lithuania, built only in 2021 on the same site as the old wooden church that was destroyed by fire.

The sanctuary is built in the shape of a cross, settled in a pine forest next to a popular hiking trail. The facades are heavily glazed, so that the interior spaces are visually connected to the surroundings. The church is not only bright, but also modern, with screens on the walls showing the texts of prayers and hymns, internet access and a children‘s room.

The old wooden church of Kulautuva was completely burnt down in 2012.

14. VALLEY OF GODS AND GODDESSES

Directions at a house No. Pušyno g. 39 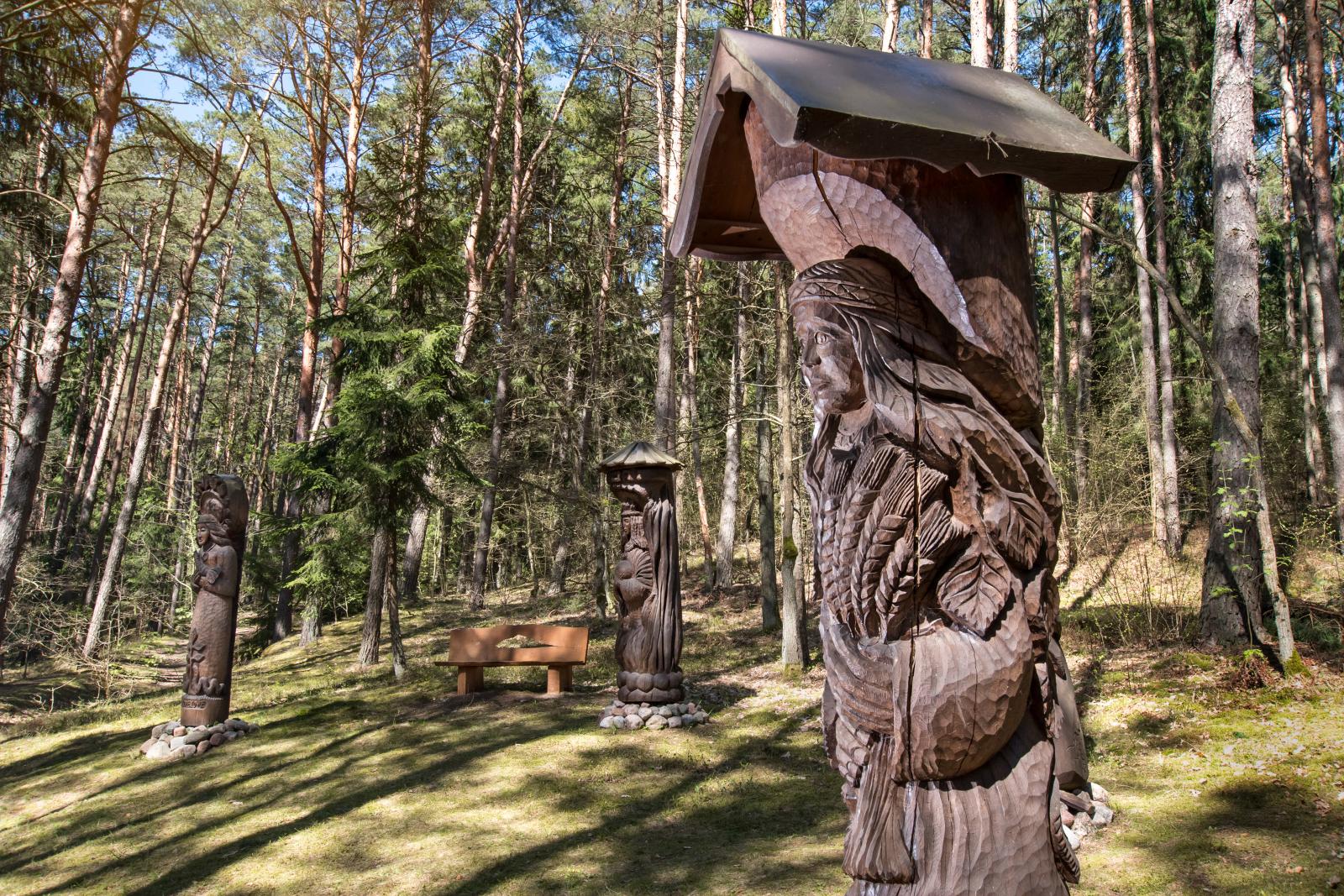 Valley of Gods and Goddesses was established on the Kulautuva hiking trail. These oak sculptures were created in the summer plein airs of Lithuanian sculptors, giving meaning to the most important pagan gods and goddesses Perkūnas, Patrimpas, Pikuolis, Žemyna, Gabija, Kovas, Laima, Medeinė.

It is a great opportunity to enjoy the therapy provided by centuries-old pine trees, admire the forest and its peace. 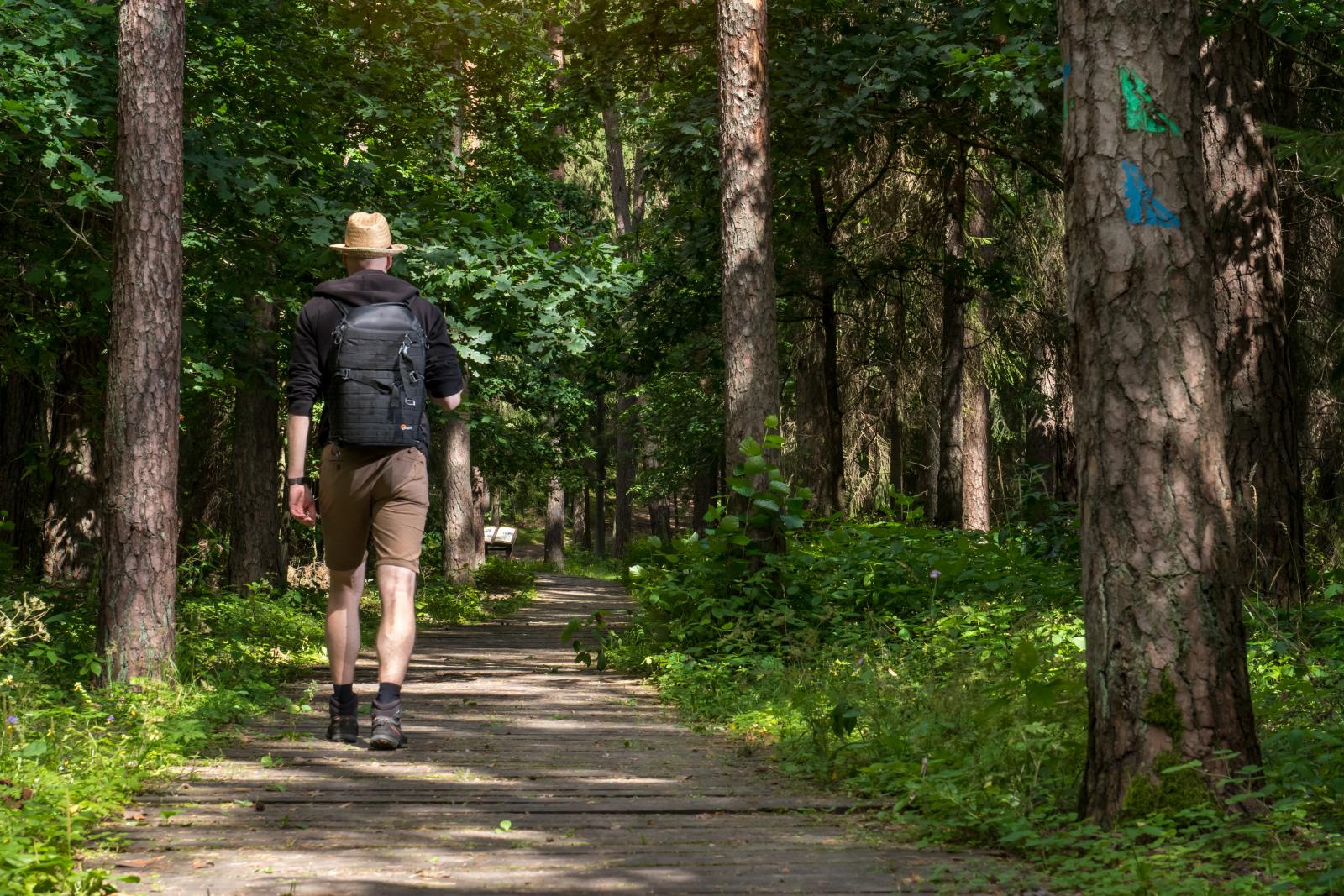 Kulautuva Wellness Trails start with two wooden sculptures with their hands up which invite you to take a hike through the pine-scented forests of Kulautuva. You can walk along one of six different routes.

All the paths are circular – you end the trail where you start it. The trail is hilly, meandering through sandy pine forests. From here you can see the beautiful bends of the Nemunas. As you walk along these trails, you will pass the site of the apparition of the Virgin Mary, information stands, wooden sculptures, recreation and children‘s playgrounds. 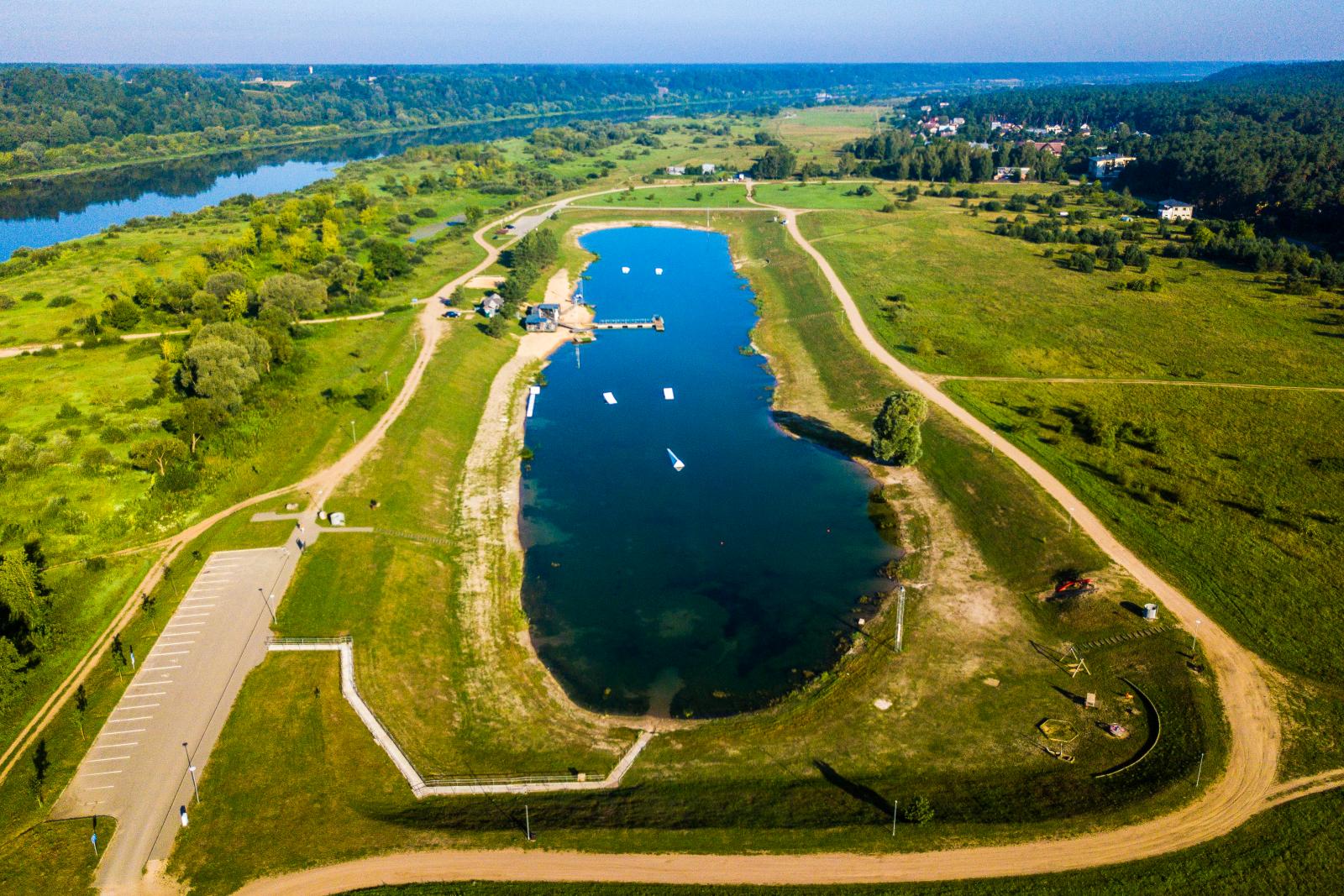 Kulautuva quarry and beach meet the international Blue Flag requirements, with a lifesaving station, a pontoon boat pier, changing rooms, children‘s playgrounds, a volleyball court, fitness equipment, and a special path to the water for the disabled.

After the installation of such an infrastructure, Kulautuva received private investment and the beach became home to the Wake Inn which was the largest wakeboard park in Lithuania at the time, and a café.

PIER AT THE KULAUTUVA QUARRY

Kulautuva can be reached by land and by water. During the summer season, a ferry moves pedestrians and cyclists from the Zapyškis pier to the pier near the Kulautuva quarry and wakeboard park.

The bicycle paths on both sides of the Nemunas on the route Marvelė-Kačerginė-Zapyškis-Kulautuva-Šilelis vlg.-Marvelė.are thus connected and form a 40 km long Minor Tourism Ring of Kaunas District.