Welcome to Vilkija – land of hills and river valleys! 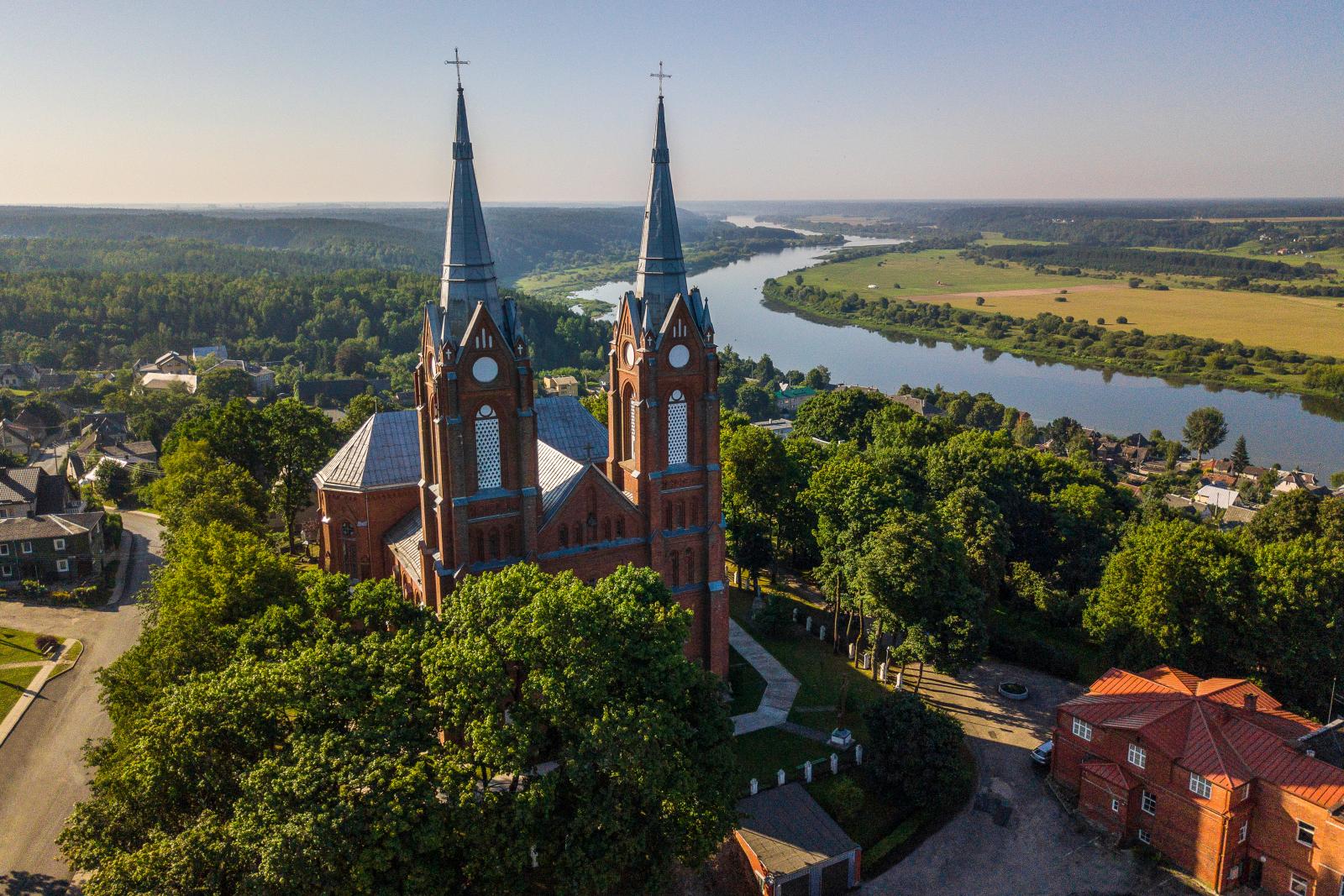 Vilkija is an urban monument, unique and valuable for its buildings altogether and their compatibility with the terrain of the area. This small settlement, a town of hilly streets, was first mentioned in the historical annals in the 15th century in the letters of Vytautas the Great to the Grand Master of the Teutonic Order.

The town belonged to the family of Zabielas in the 18th century when briefly had the privilege of “renovation” of Magdeburg rights and a coat of arms. Vilkija suffered from unfavourable natural conditions for centuries. The great fire at the end of the 19th century destroyed the central part of the town and the old Vilkija church. Later in the early 20th century, the new church of St. George was built on a hill, not near the banks of the Nemunas. Birth of the new church started a new phase of Vilkija town.

Vilkija is one of the most beautiful places in Kaunas district. The unique panorama of the meanders of the Nemunas river greets tourists and visitors travelling from Kaunas to Jurbarkas.

In Vilkija you can find one of a kind in Lithuania ferry across the Nemunas, historical museum of Juška brothers, Louis Armstrong‘s Square, which was built in honour of the musician‘s adoptive parents who were from Vilkija, elements of street art, Jewish heritage sites and other tourist attractions worth seeing. 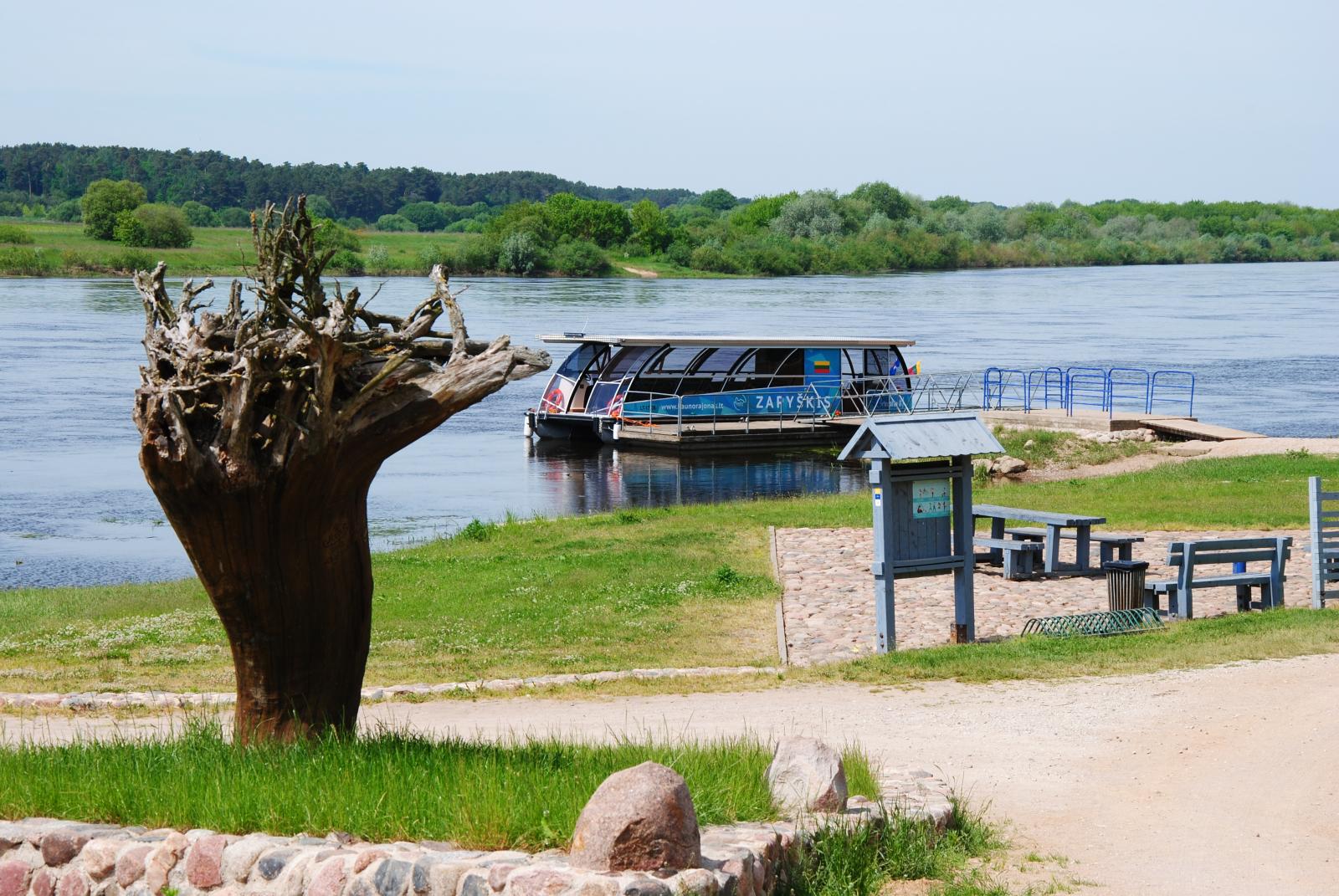 The pier is intended for dropping off and picking up tourists who travel for sightseeing and entertainment purposes when visiting tourist attractions and cultural events in Vilkija. The pier welcomes pleasure pleasure ships from Zapyškis, piers of Kaunas and Jurbarkas.

In the park next to the Vilkija Pier, you will find an event square that was built in 2021 in memory of the jazz musician Louis Armstrong and his adoptive parents from Vilkija, with music players that allow you to listen to the well-known music of the musician. 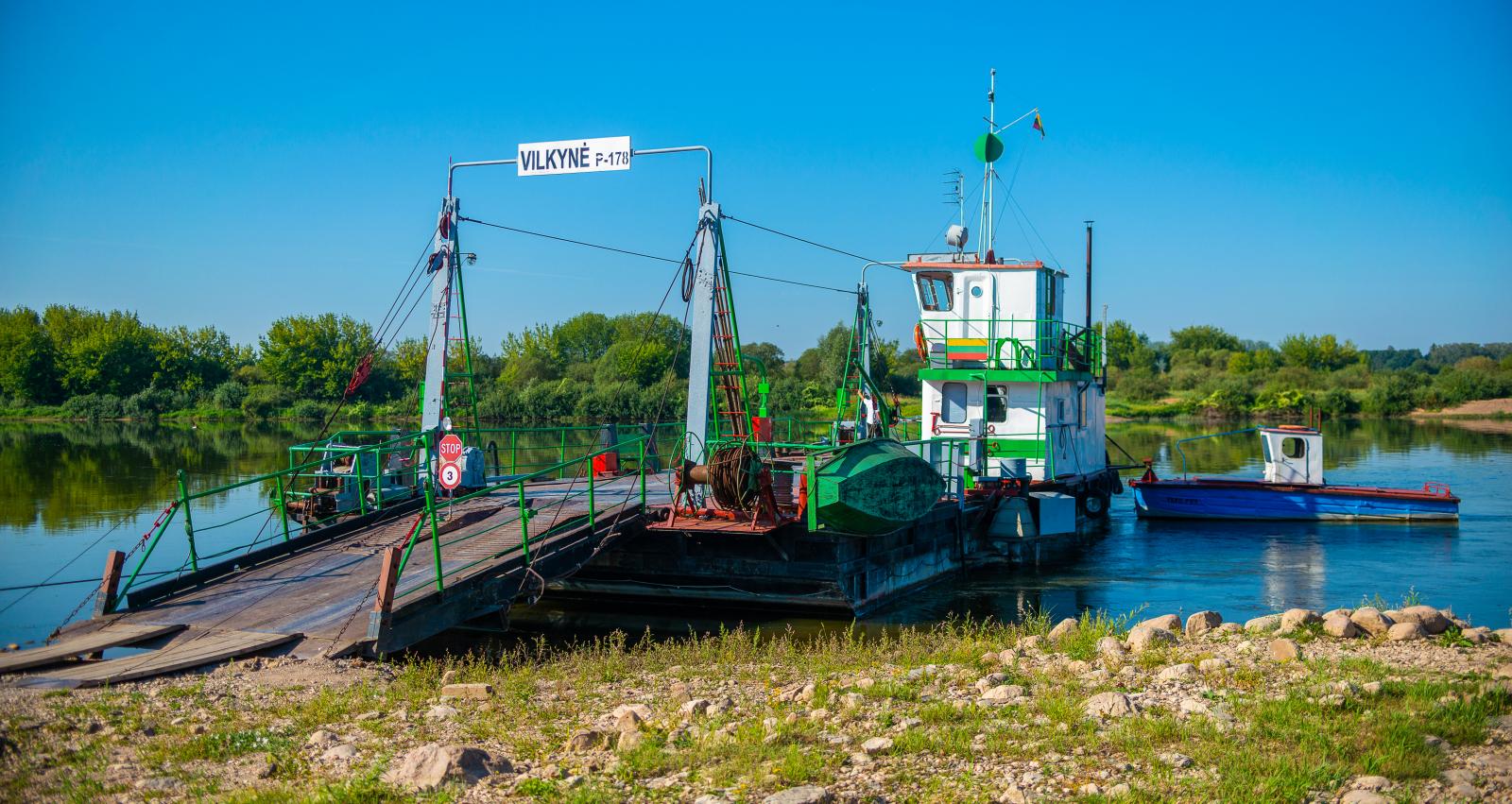 “Vilkynė” is the name of a river motor ferry which has been operating in Vilkija since 1999. It is the only ferry across the Nemunas in Lithuania. It takes pedestrians, cyclists and cars from Vilkija pier to Pavilkijys pier (Šakiai dstr.) and back every day from May to November. People who cross the Nemunas by this ferry from Vilkija to Pavilkijys return to Kaunas on the other side of the river, passing through the Kaunas district towns by the river Zapyškis and Kačerginė, thus shortening the road trip to Kaunas of about 60 km. 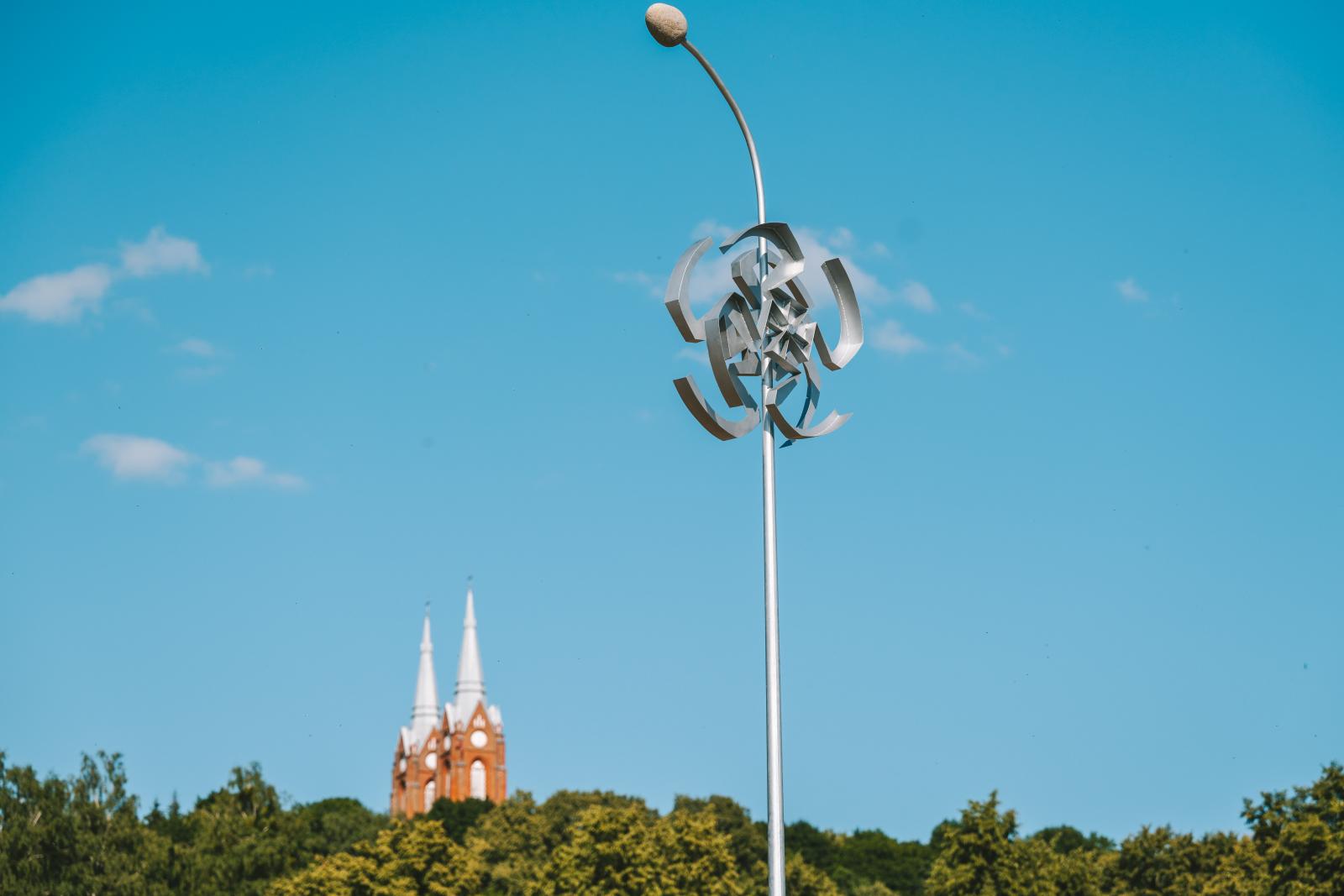 It is not only an artistic accent, but also a work of art that gives meaning to the identity and history of the community, the idea of which was developed by artist Marijus Gvildys.

“Rose of the winds” is a term used by geographers to indicate the direction of the winds. It is not only an exceptional unit, it is a crossroads, a movement. “Get up and move” became the concept of the sculpture, so the place of its creation was chosen at the pier, near the ferry.

In historical chronicals Vilkija was mentioned in 1236. Relating the old times, the Gothic font was chosen for the art work, the letter “V” can be read in the swastikas, denoting the first letter of the city's name. 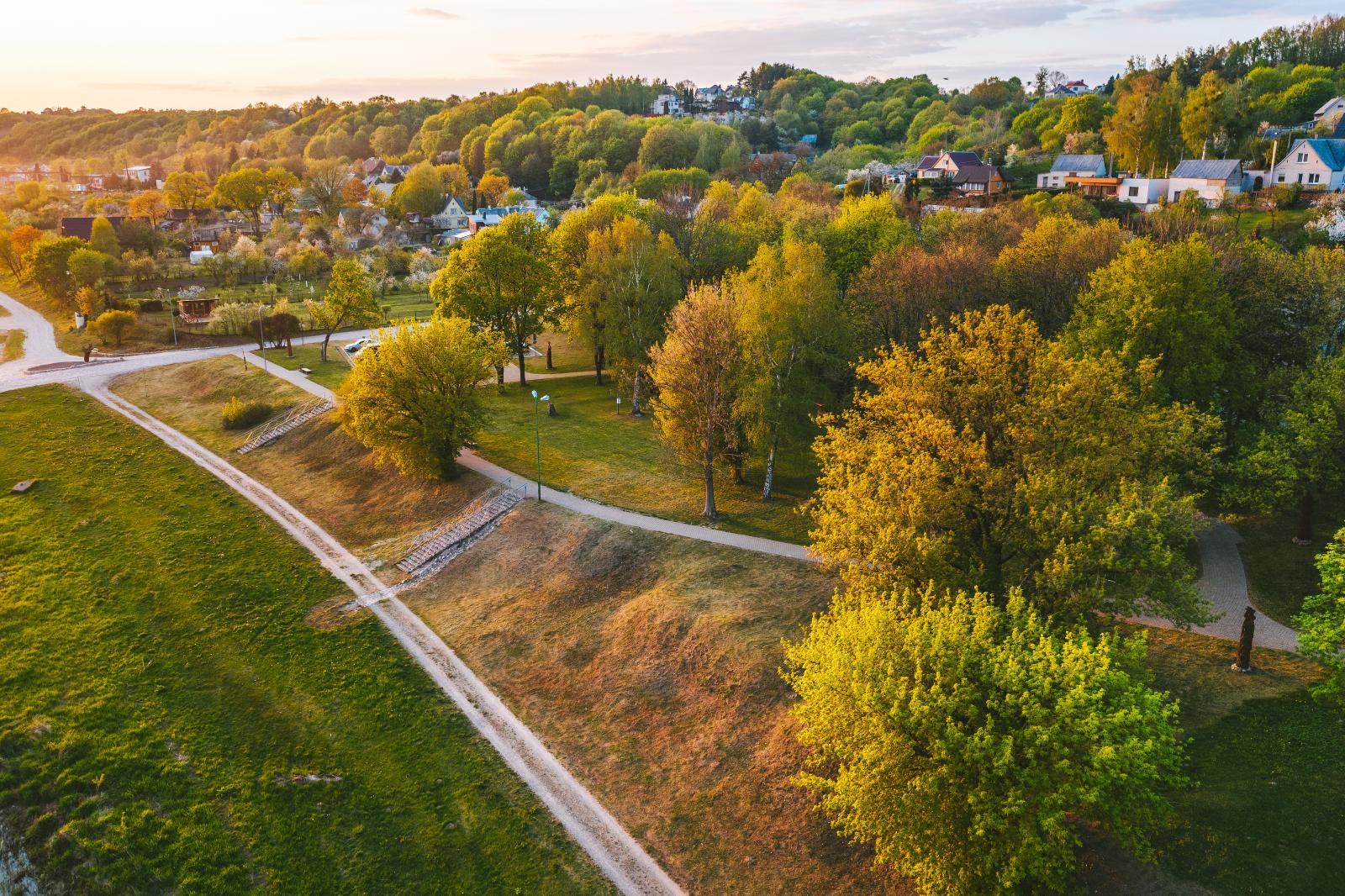 Park of Vilkija is a space of wooden sculptures and landscaped walkways next to Louis Armstrong Square along the river Nemunas. About ten years ago, seven oak sculptures were carved by artists at a sculptor’s plein air.

In the park you can easily find a tax collector, a ferryman, a blacksmith, a blacksmith, a horse breeder, a flagman, a fisherman and an inn keeper. All of whom tell the story of the town‘s history and life.

There is a car parking lot and stairs paved with the cobblestones of the old town next to the park as well as hiking and cycling trails of fabulous beauty. 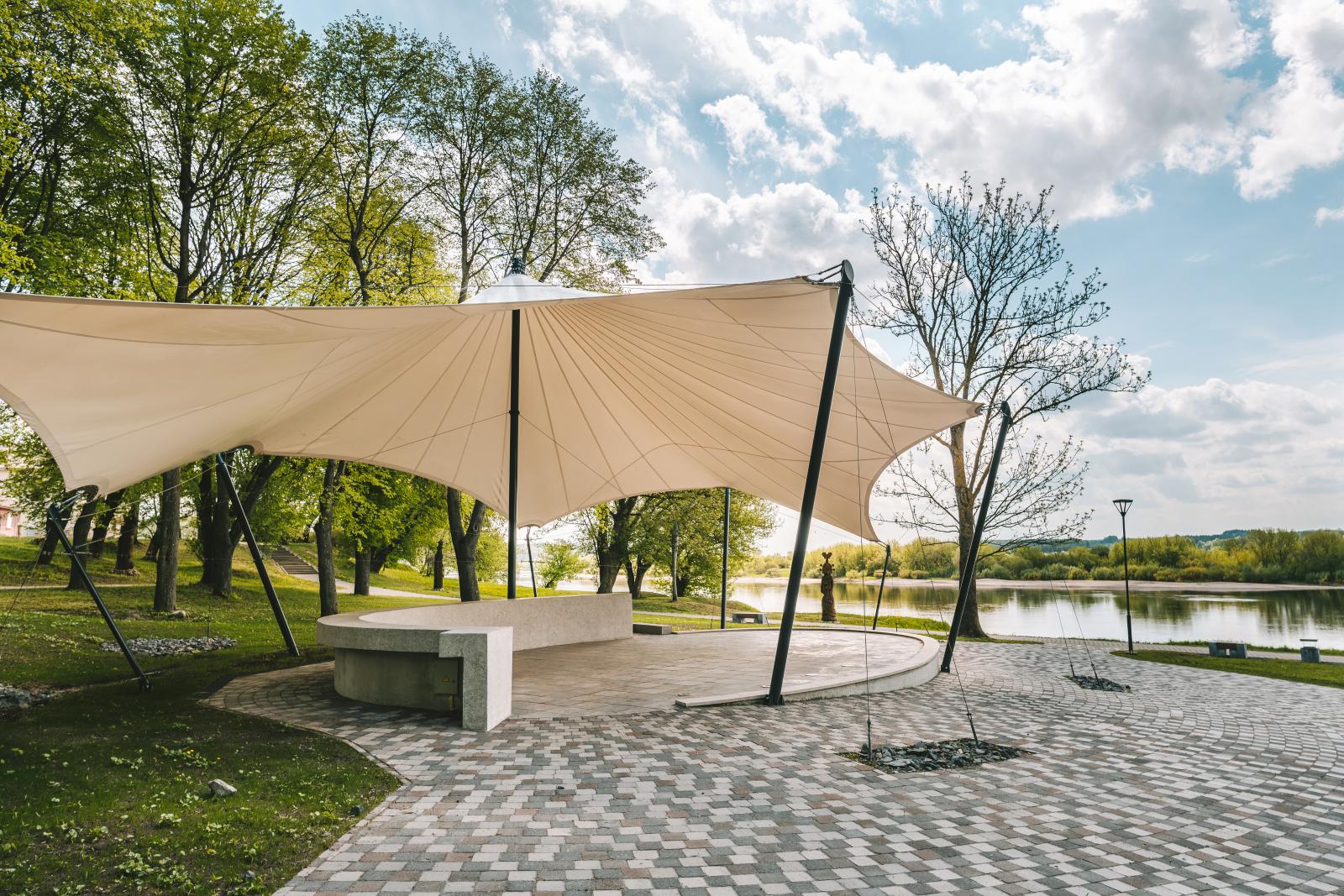 In the second half of the 19th century, Vilkija was home to the Litvak Karnovskis family – the future adoptive parents of jazz legend Louis Armstrong. At the end of the century, the Karnovskis left for the United States and settled in New York. When the family moved to New Orleans in the early 20th century, a fateful meeting with little Louis took place.

An event square was opened in Vilkija in 2021 to commemorate jazz legend Louis Armstrong and his adoptive parents, the Karnowskis.

The square is equipped with music players playing 13 of his most popular songs. 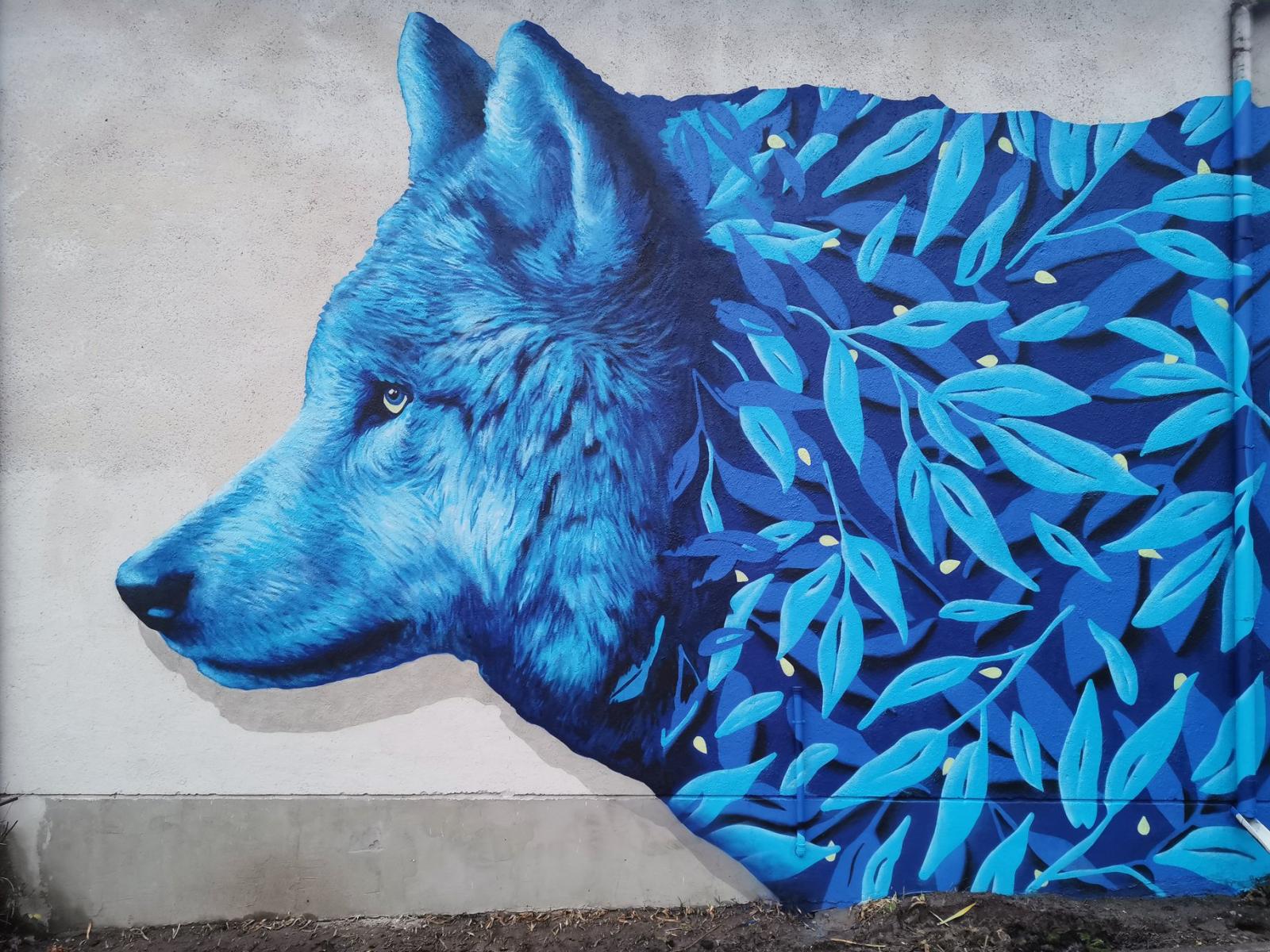 The wolf fresco illustrates the name of Vilkija, which is due to the roaring wolf gangs that have been heard in the area around the town in the past.

The body of the wolf is decorated with plant motifs, which can also be seen on another street artwork of T. Šimkaus in Vilkija, “Apsikabinimas” (“Embrace”), on one of the hugging persons. This integrity only reinforces the impression that the town of Vilkija is one great work of art. 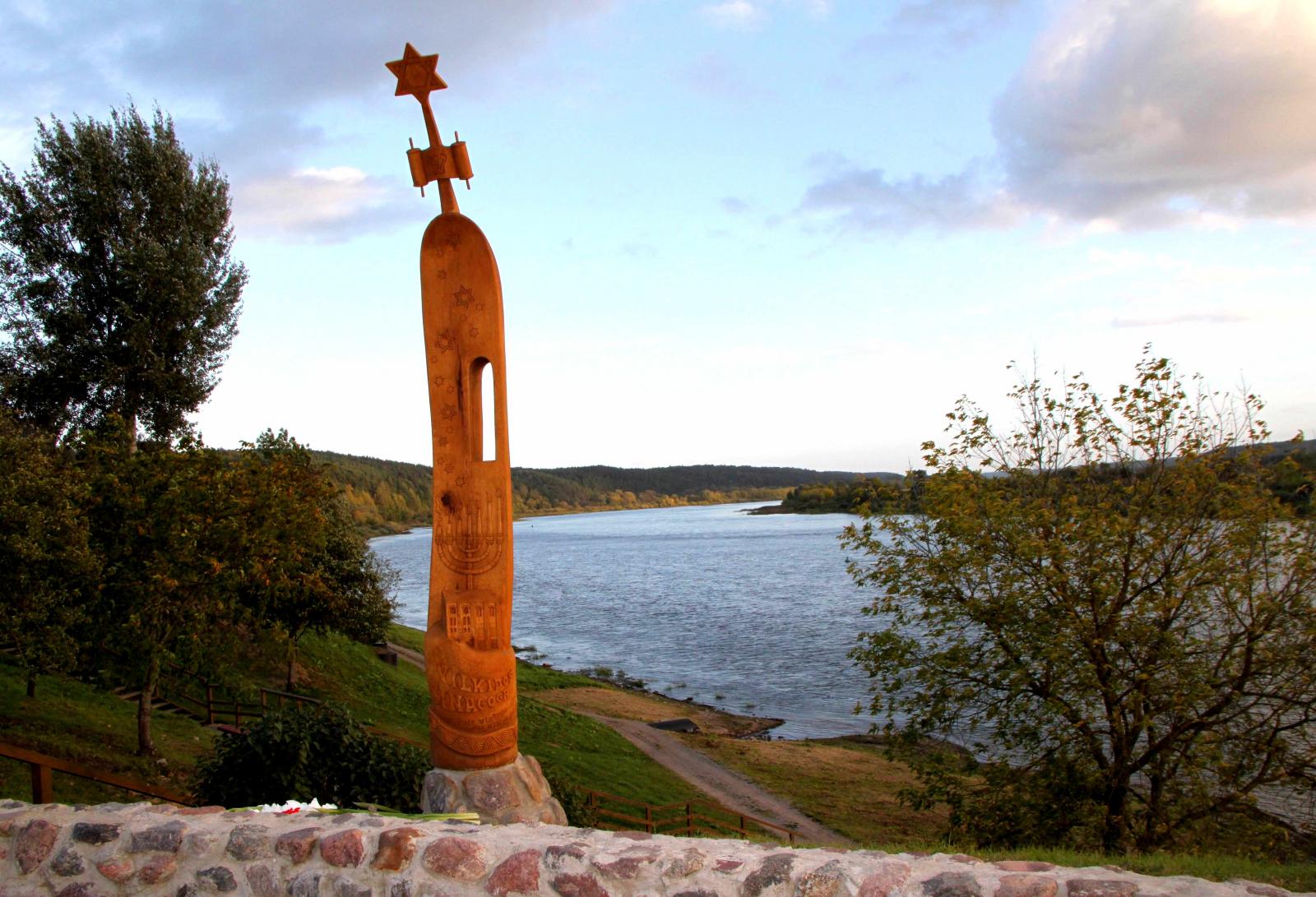 On the Day of Remembrance of the Genocide of Lithuanian Jews, on 23rd of September 2014, a monumental memorial was unveiled in Vilkija on the site of the former synagogue. This place also was a Jewish ghetto during the Nazi occupation years.

According to the author of the monument, A. Sniečkus, the oak tree itself „spoke“ with him when the sculpture revealing the memory of the prayers and the suffering began to emerge.

The Jewish community in Vilkija was established in the end of the 18th century. The community grew rapidly from year to year. Until 1915 about 80% of the population of Vilkija was Jewish. 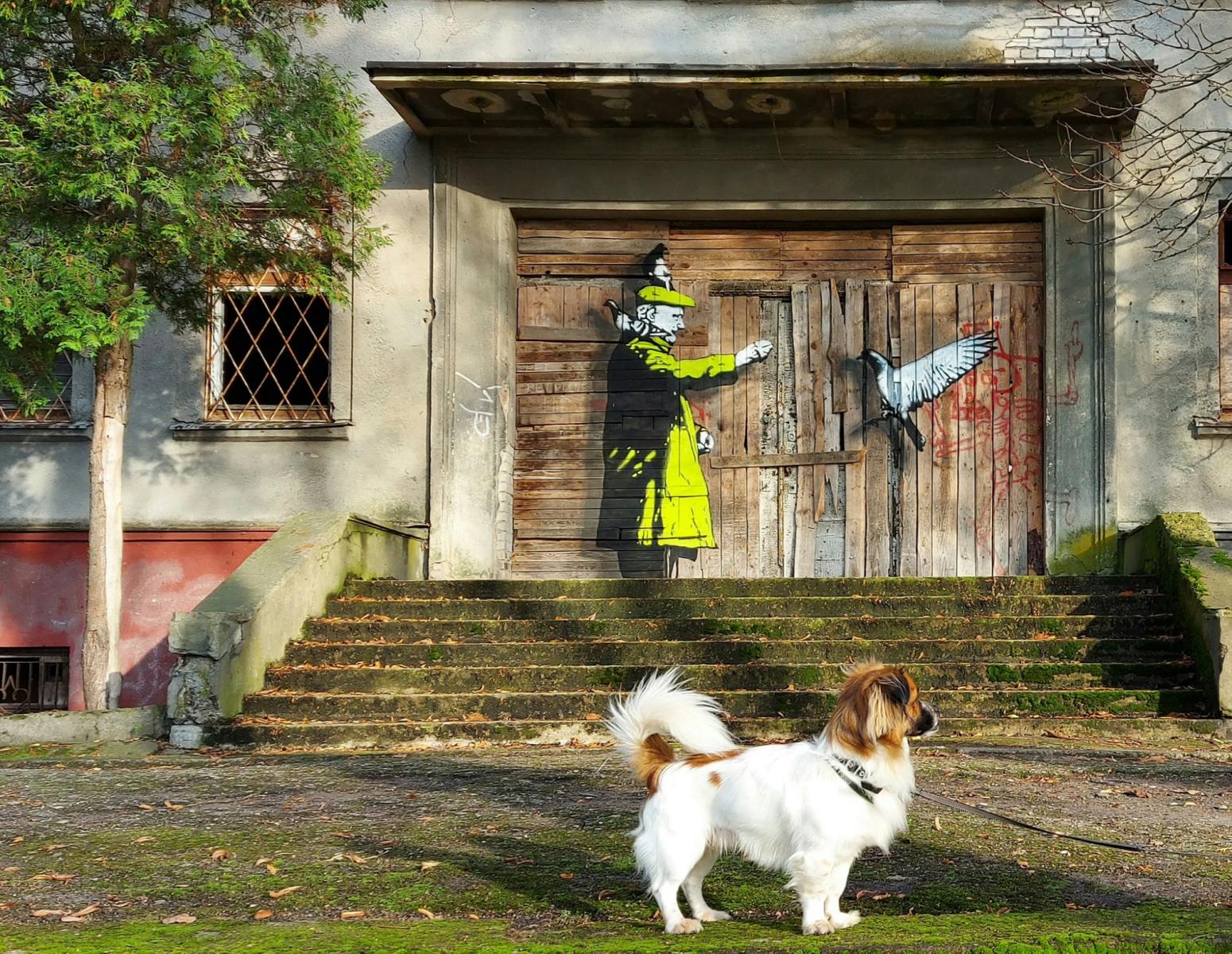 The Cultural Centre of Vilkija have implemented the project “Kaunas and Kaunas District – European Capital of Culture 2022”. The project aims to create a mystical and legendary image of the town, which is further enhanced by the mysteriously coloured frescoes on the buildings.

“The Pigeon Feeder” is painted on an abandoned building in Vilkija. On the other wall of the same building is another street art work by the same artist called “Embrace”.

The painting of an old man feeding pigeons gives a feeling of cosiness and friendliness to the space around him. 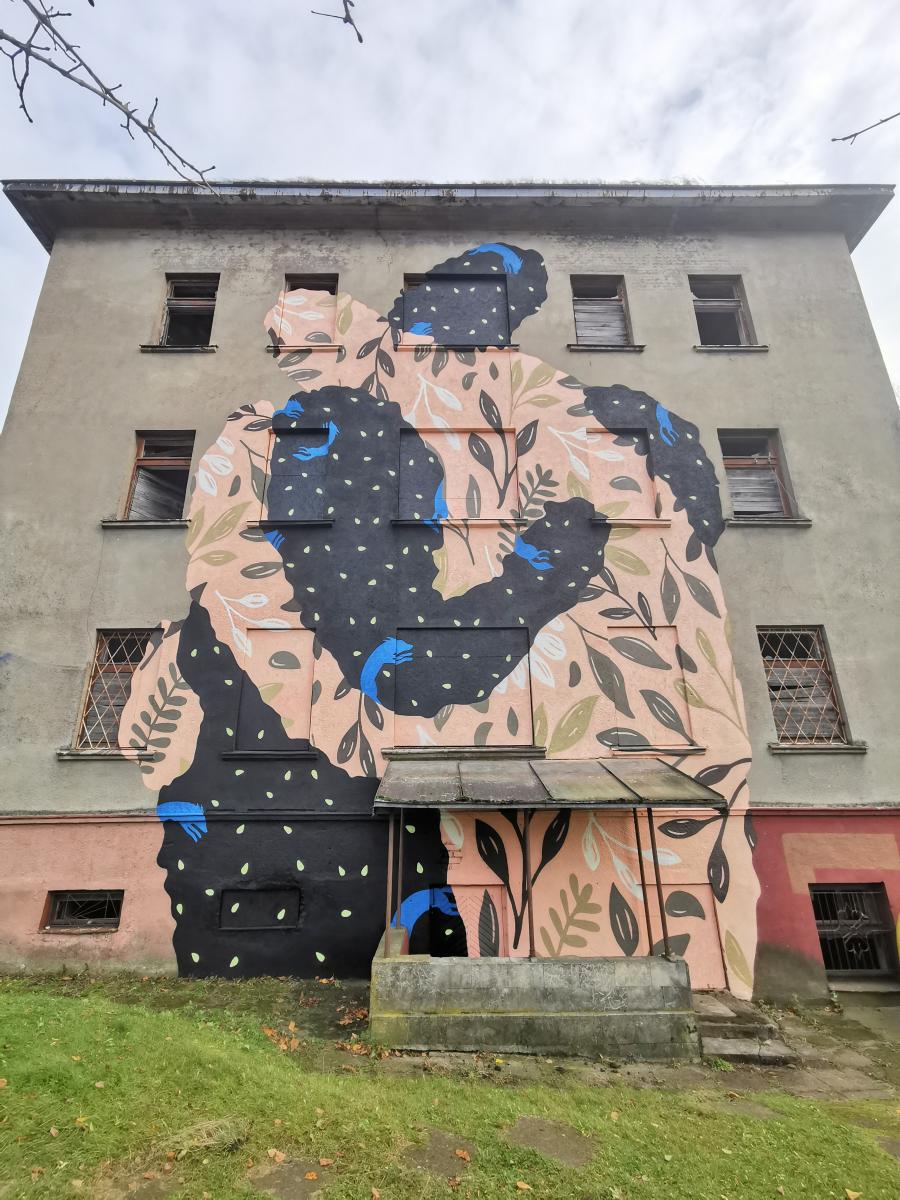 To the Vilkija community dedicated drawing is a symbol of friendship, love and warm relationships. When looking at the “Embrace” for the first time, some people saw there friendship between nature and man, others found a fight between wolves and, in the context of quarantine, waiting for the moment when we could embrace each other again, without any extraneous thoughts or hesitation.

In his drawings T. Šimkus interpreted the history of Vilkija and the legend of its origin in his own way, imprinted the signs of a wish for togetherness, closeness and tolerance. According to the artist, Vilkija‘s community has become the main source of inspiration for his works. 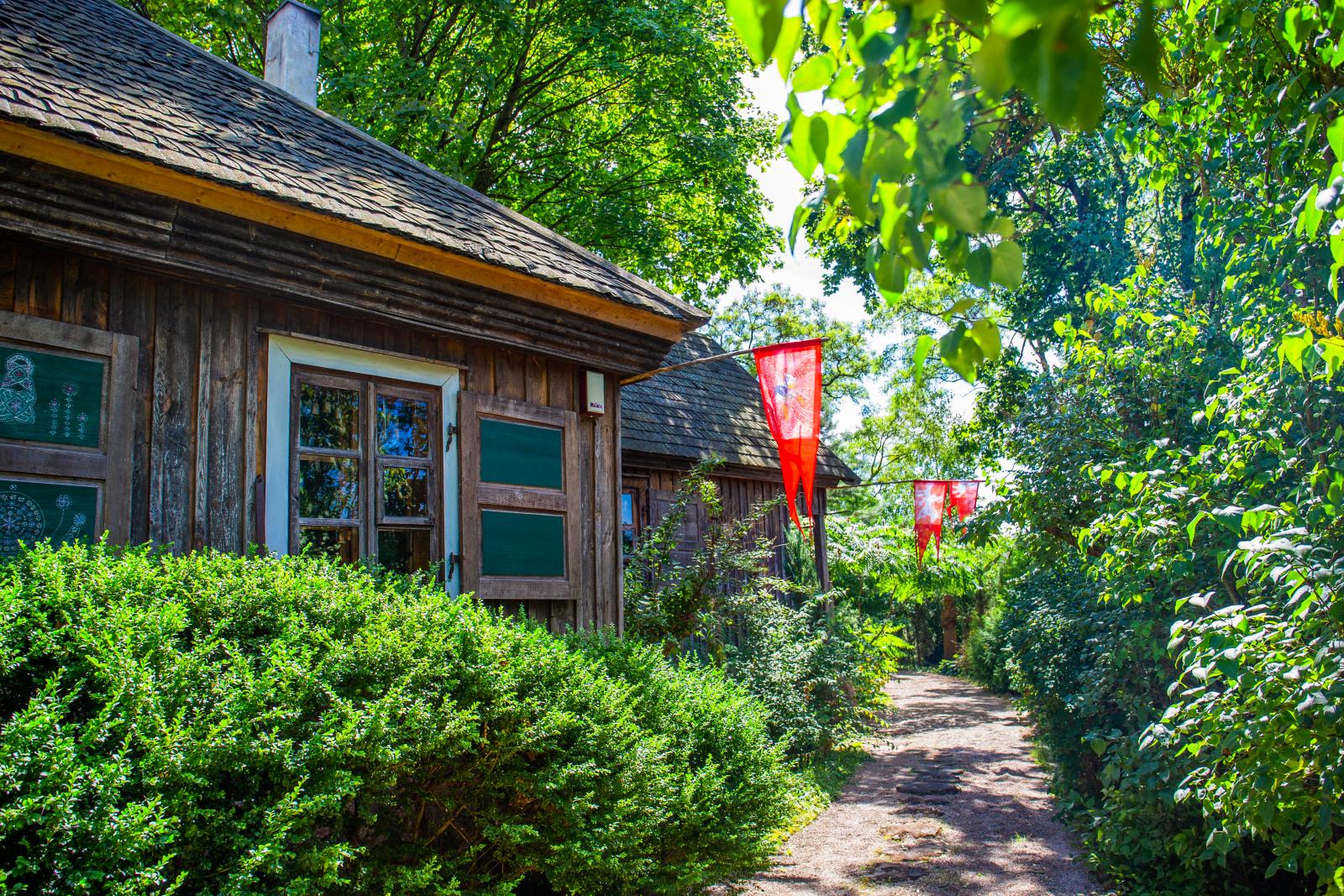 The oldest building in Vilkija, more than three hundred years old, was inhabited by Antanas Juška, a priest, collector of folklore, and the most famous Lithuanian ethnographer, who lived there in 1863-1864.

His contemporaries mention a dictionary of more than 70,000 old Lithuanian words, a songbook of 7,000 songs, a collection of about 2,000 melodies, letters by Vydūnas, and hundreds of old household items.

Educational tours are organised for groups by prior arrangement. 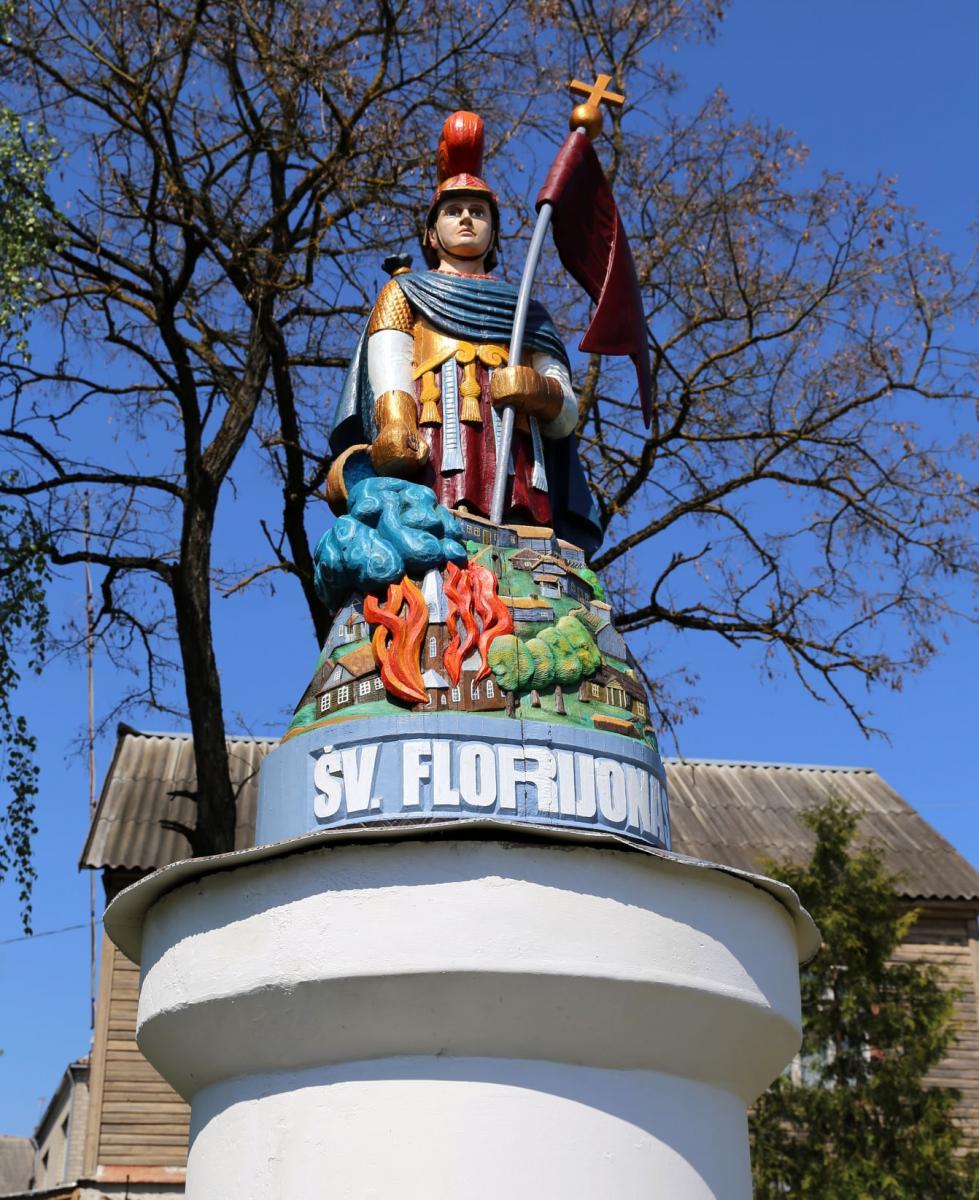 In the Catholic faith, St Florian is a saint who protects people and places from fires. To protect the town of Vilkija from fires, a statue of St Florian was erected in the town centre in 1999.

Saint Florian was a Roman soldier who converted to Christianity and was martyred for his conversion around 304 AD. St Florian was famous for his miraculous feat of extinguishing a burning house with only one bucket of water.

St Florian‘s Day was celebrated in Lithuania until the World War II. A after the restoration of Lithuania‘s Independence, it became a professional holiday for firefighters and rescue workers. 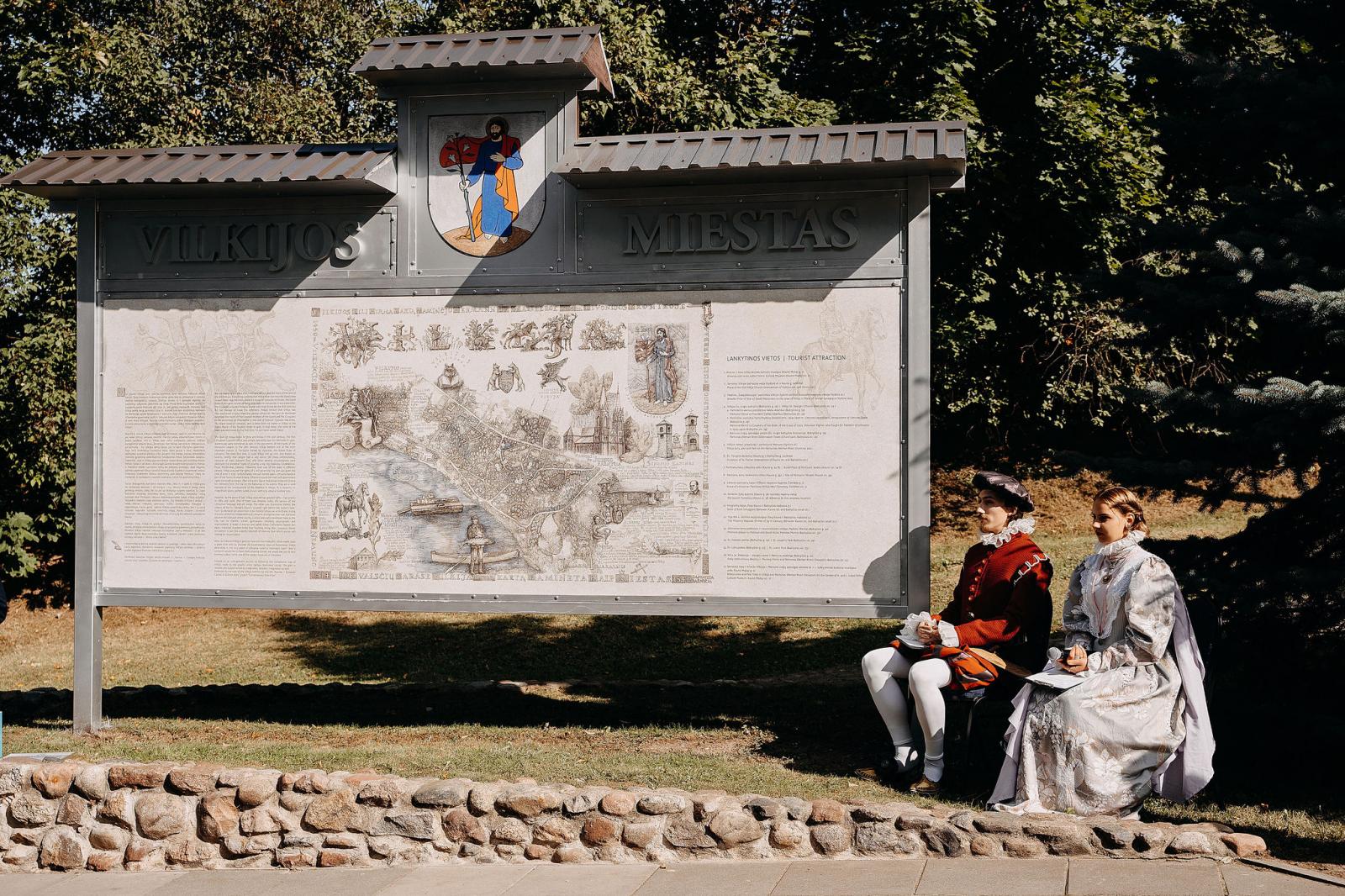 In autumn of 2020, an artistic map of Vilkija was unveiled during the town‘s celebration, with the idea of presenting the history, geography and tourist attractions of the town. Graphic artist E. Rudinskas had been working on the map for several months, constantly communicating with the residents and collecting historical material.

It is a visual identity of the town, which encodes and reflects the existing values of the Vilkija region, as well as the stories, myths, legends, tales and the present day news. 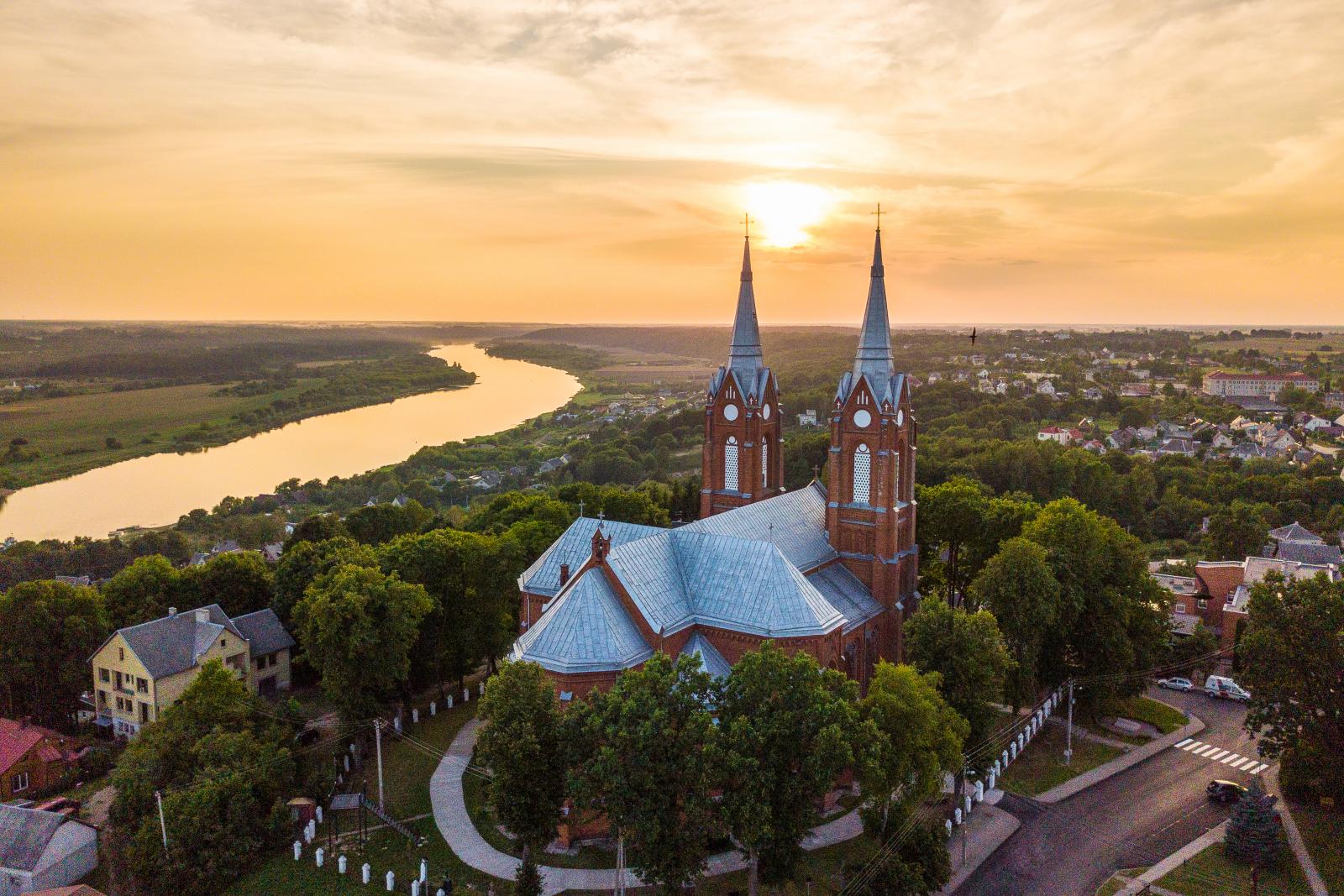 The construction of a new brick church in Vilkija began in 1901.This magnificent neo-Gothic red brick building on a hill has become the main attraction of the town. The height of the church towers reached 35 metres. Inside the church, there is an organ made by the famous Lithuanian craftsman Jonas Garalevičius.

The pre-history of the church, which was completely built in 1908, dates back to the 16th century, when a wooden church of St. George stood on the lower terrace of the town on the river Nemunas. In the old times Vilkija was devastated by fire many times, the church was burnt down and rebuilt. 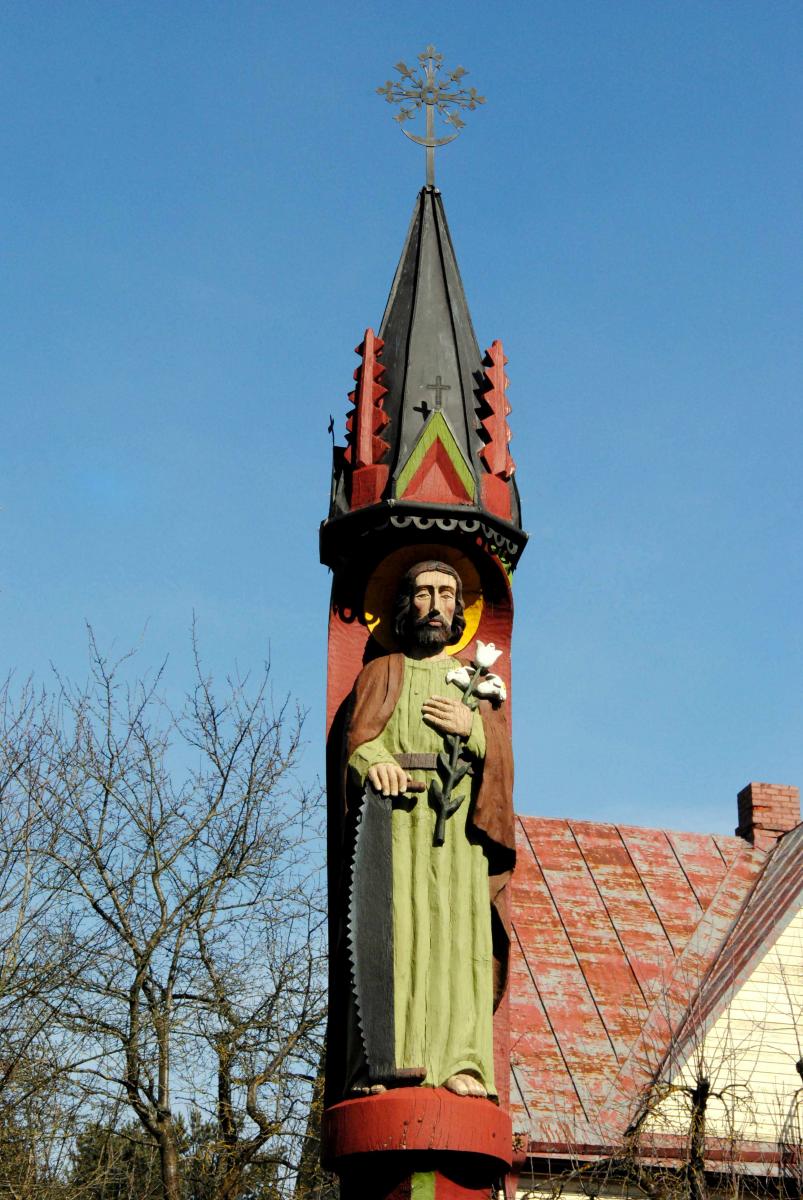 In 1792, the 4-year Seimas granted Vilkija the „renovation“ privilege of magdeburg rights and a coat of arms. From then on, Vilkija, as a town, managed its own administrative, treasury and judicial affairs. However, when the Targovica confederates revoked the resolutions of the Seimas with regard to towns, these rights were revoked in 1794.

The guardian of Vilkija, St. Joseph the Worker was erected in 1992 in front of the Church of St. George to commemorate the 200th anniversary of the granting of the town rights.

The sculptor is A. Vaištaras. 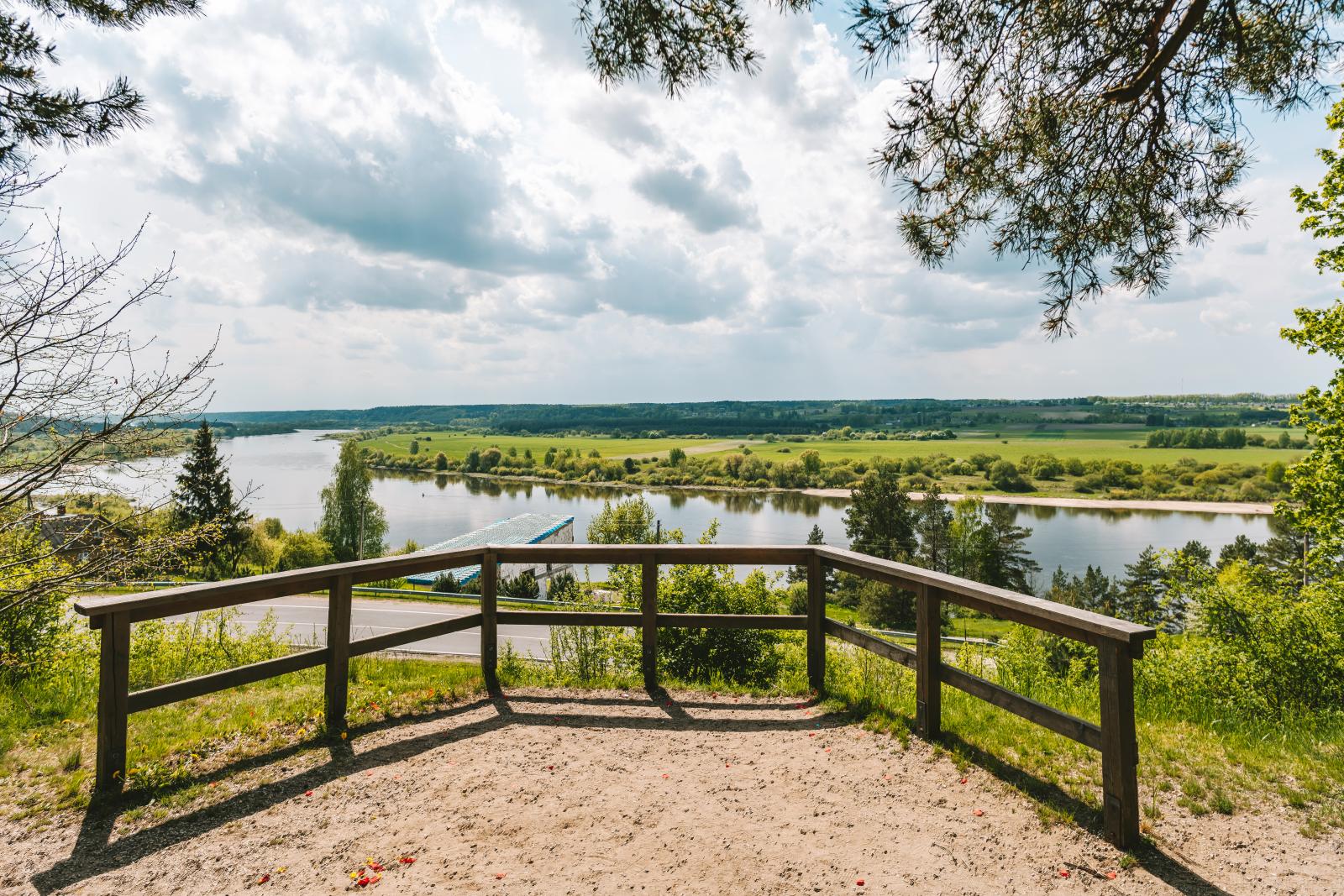 The Vilkija viewpoint is located at the entrance to the town. Well-arranged, equipped with benches, safe parking lot, it is the best place to enjoy the views of Vilkija‘s nature and the bends of the Nemunas.

Nearby, on the hill, you can visit the oldest house of Vilkija. Today it is a Museum of Ethnic Culture, where a priest, folklore writer, ethnographer and linguist Antanas Juška lived from 1862-1864.

Walking from the viewpoint along Vydūnas Avenue, you can reach Louis Armstrong Square, park of Vilkija  and the Vilkija pier on the river Nemunas. 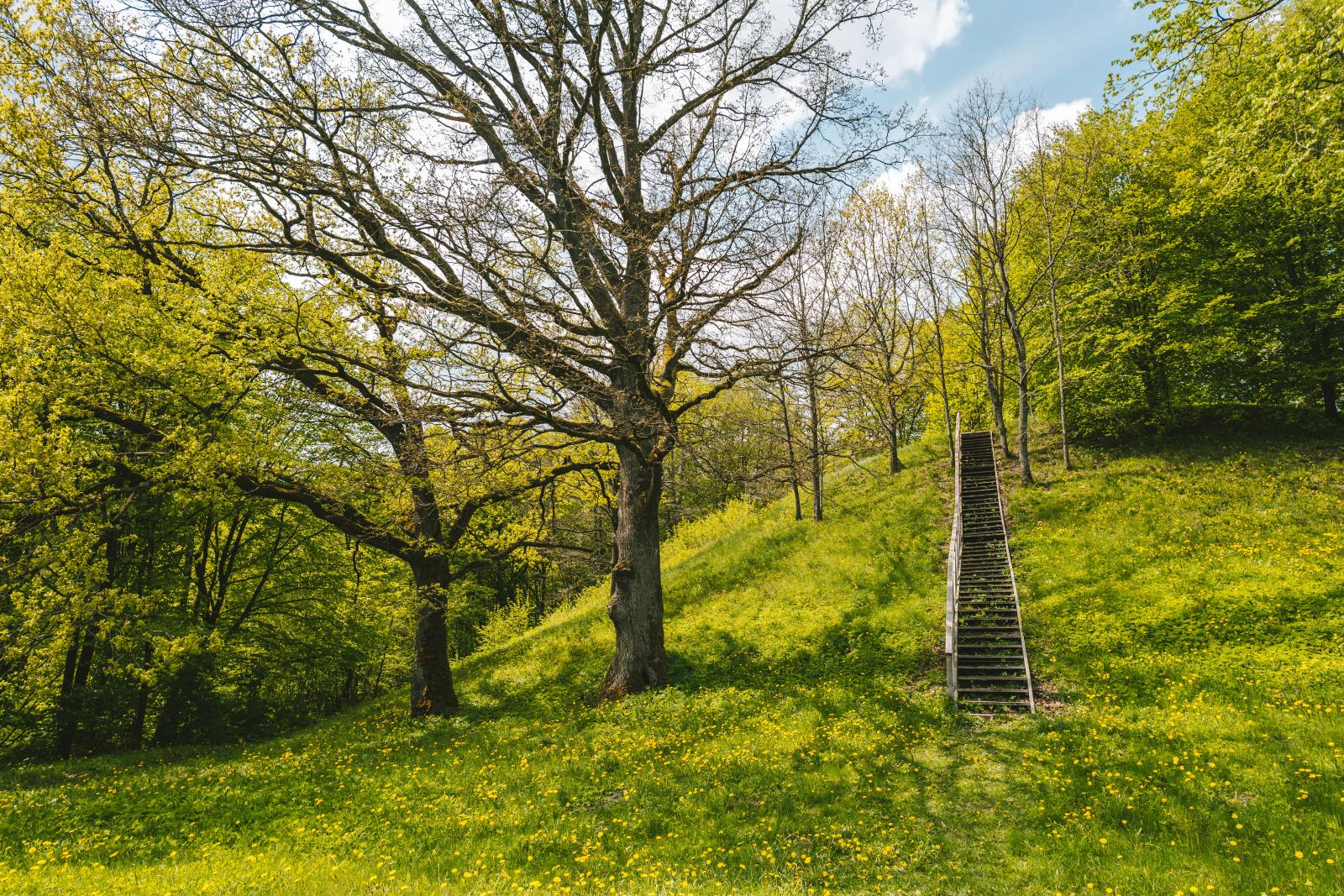 Mound of Jaučakiai with an ancient settlement is one of the best preserved mounds in Panemunė, dating back to the 1st millennium.

There are many legends about the castle mound. They say that the mound had been caped by the Swedes and that that giants once lived here. 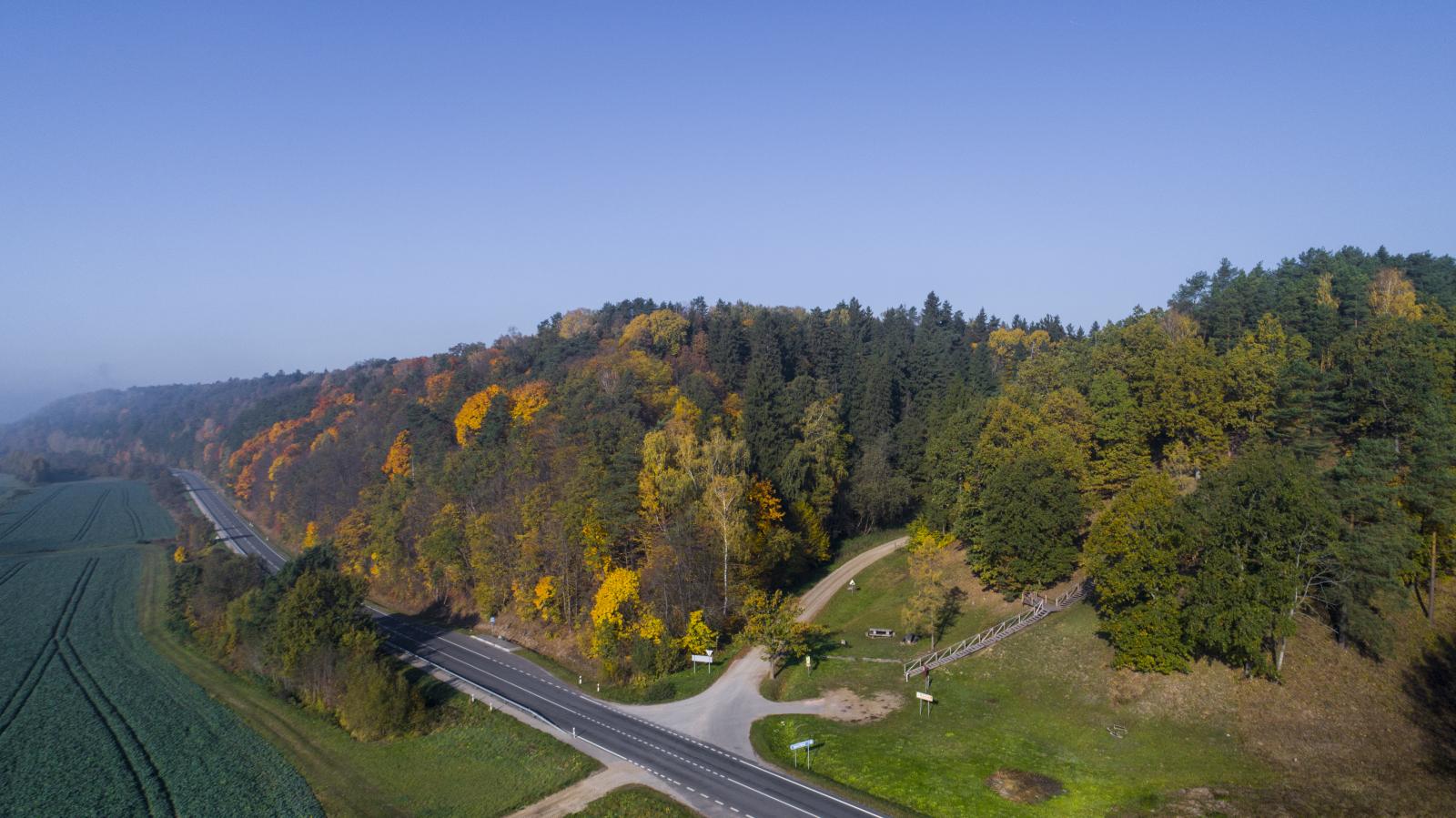 The Ringove Mound, sometimes called Pilike or Merry Hill, stands in the Ringove ethnological reserve on the right bank of the Nemunas. It is an important monument of the Lithuanian battles against the Crusaders. The wooden castle of Ringe stood on the hill which was written about in the chronicles of 1364.

At the top of the mound in the altar pagan fire is lit every year during traditional Lithuanian festivals. A sculpture „Angel of the Homeland“, with the Pillars of Gediminas on its chest stands on the mound‘s slope.