Welcome to the historic town of Zapyškis! 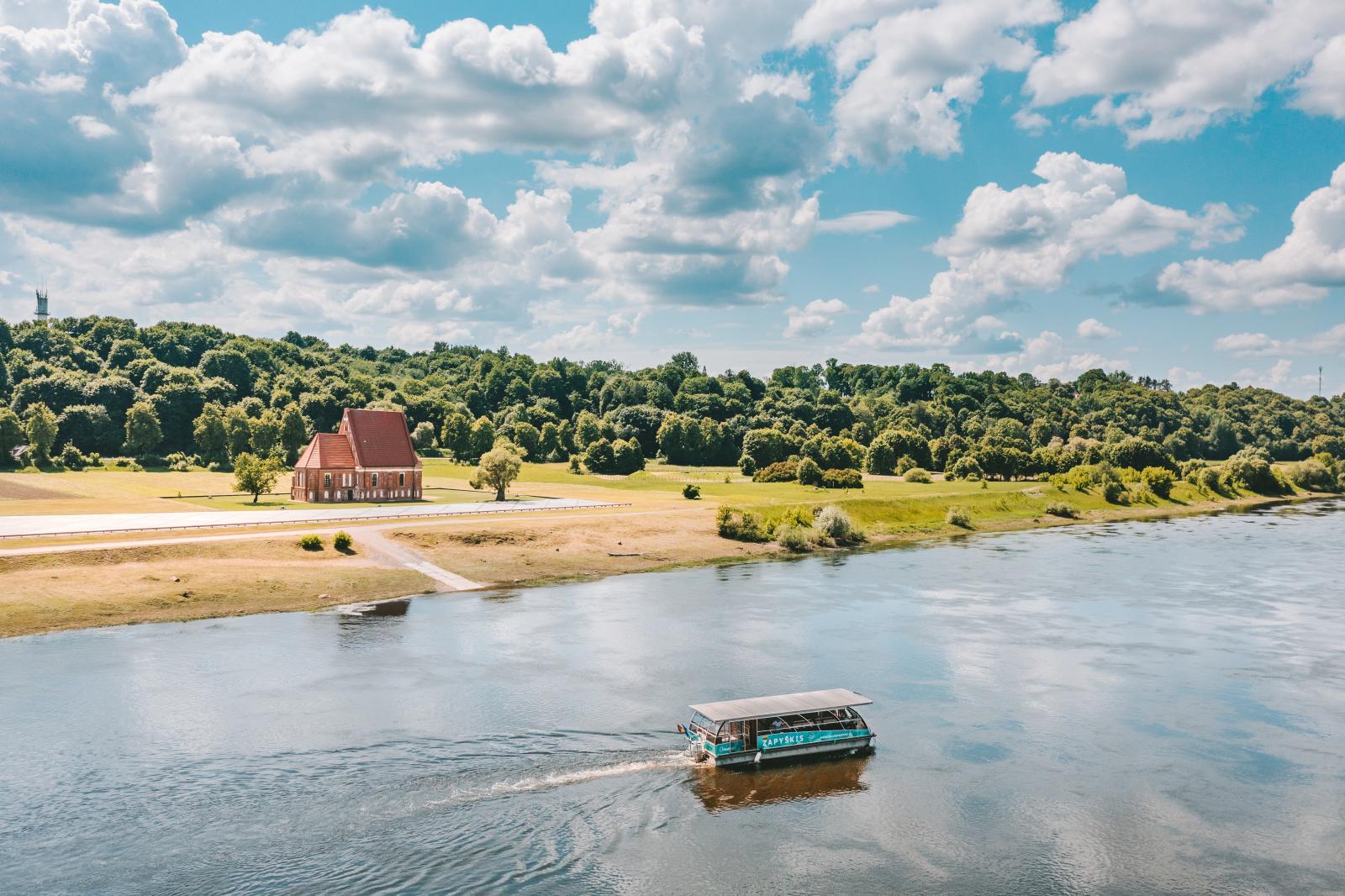 The name of Zapyškis has been mentioned in 1575, when it belonged to the Counts of Sapiegas. The town had many names: it was called Panemunė, Tarpupis, Sapiežiškės, and Sapiega Town. The Kaunas-Virbali trade and postal route passed through here. At the end of the 16th century Zapyškis church of St John the Baptist was built. This Gothic masterpiece is often called The Mother Of Lithuanian Churches.

The town of Zapyškis, which suffered from the 19th c. floods, fire and the First World War, started to expand and grew on a hill, not along the river for the obvious reasons.

Today Zapyškis is reborn and is becoming more familiar to local and foreign tourists. The restored Church of St. John the Baptist and the landscaped approaches have become a place of entertainment, many cultural events and a tourist attraction.

The town is bicycle-friendly with a cycle path along the Nemunas river. A bicycle rental and repair station during the tourist season operate, there is a charging station for electric cars here as well.

Coming here you will find a hiking trail alongside the cycle path, eco-trails of 5 to 17 km long, and a fully functioning mobile pier.

Tourist route in Zapyškis town and its surroundings

1. CHAPEL OF THE OLD ZAPYŠKIS CEMETERY 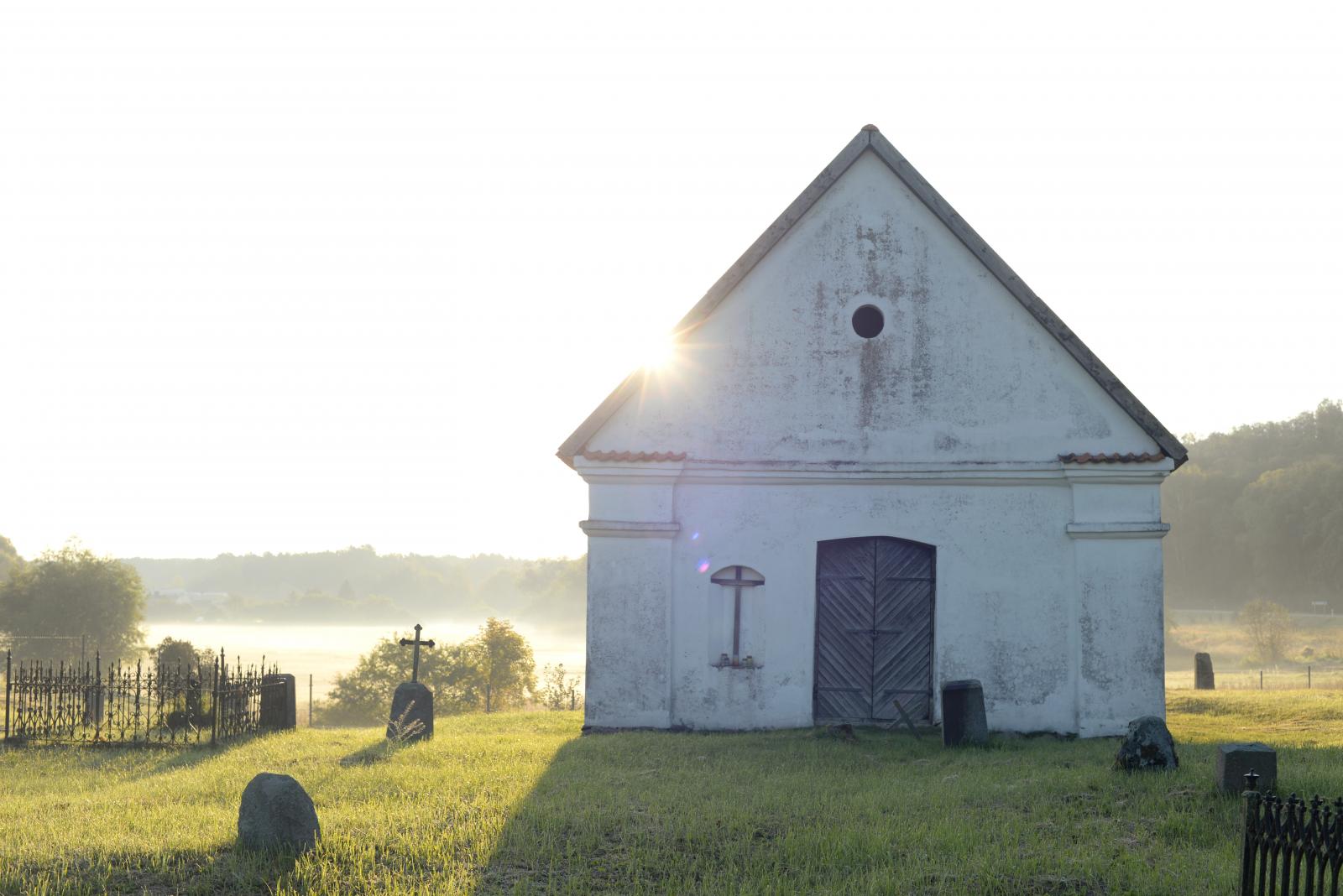 The classicist chapel in the old cemetery, where people from the Zapyškis area were buried before and after the 1863 uprising, was built around 1860.

During periods of historical changes, the chapel was used as a refuge for people seeking shelter and for the burial of priests.

At present, the chapel houses old cemetery crosses and handmade crosses made by blacksmiths. The cemetery itself is an important cultural and historical object of Suvalkija – the inscriptions on the stone monuments during the period of the ban on printing were written in Lithuanian – the local dialect.

Near the pier of Zapyškis 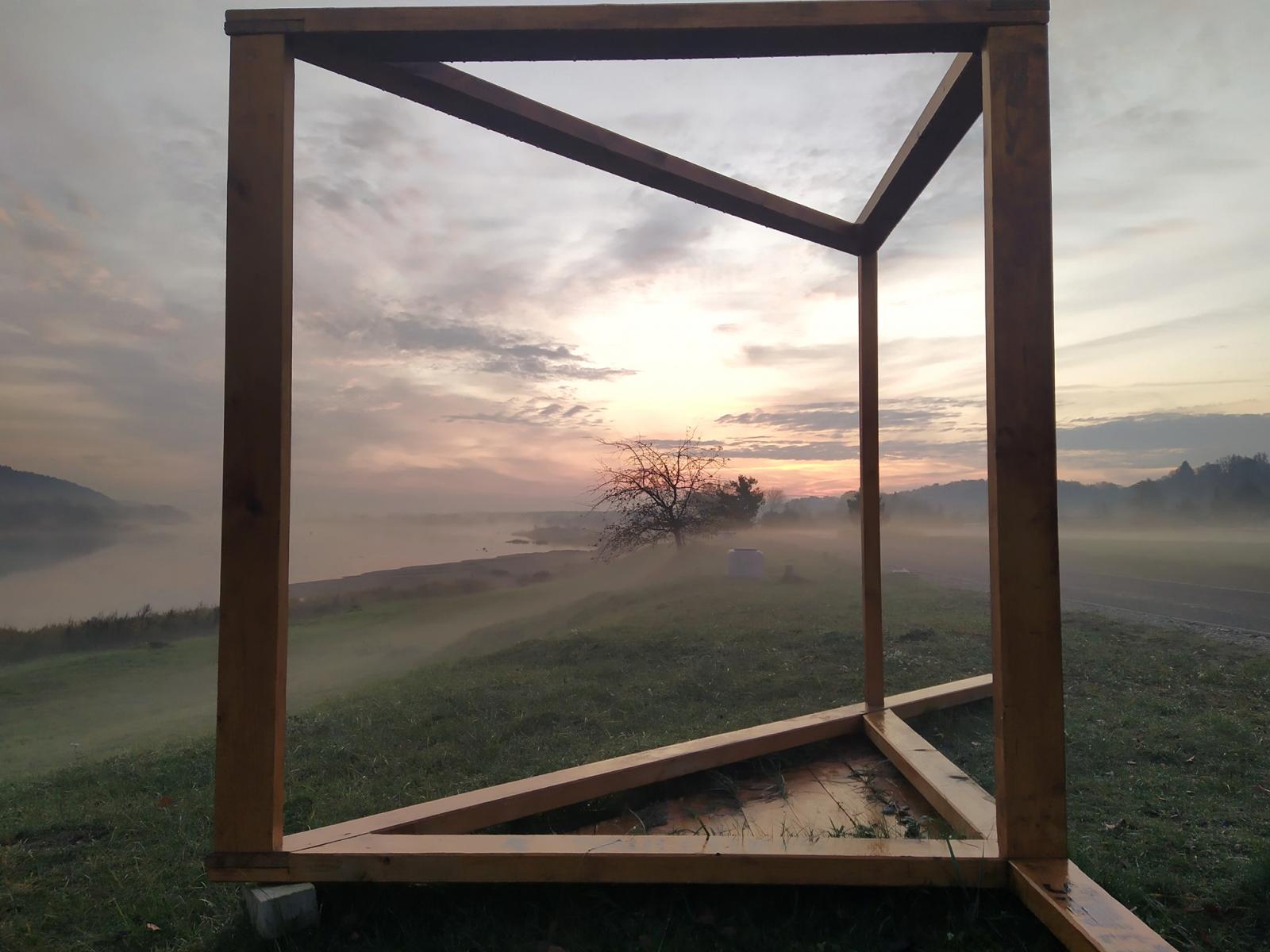 Driven by the goal of reviving and restoring the cultural traditions of the rivers of Kaunas region, the cultural platform for river research "TẽKA" and the NGO "Places of Memory" created a view of the sunrise and the sunset near the Zapyškis marina in 2018.

If you are walking at sunrise or sunset, read the instructions written on the viewpoint, admire the beautiful views and take a framed photo. 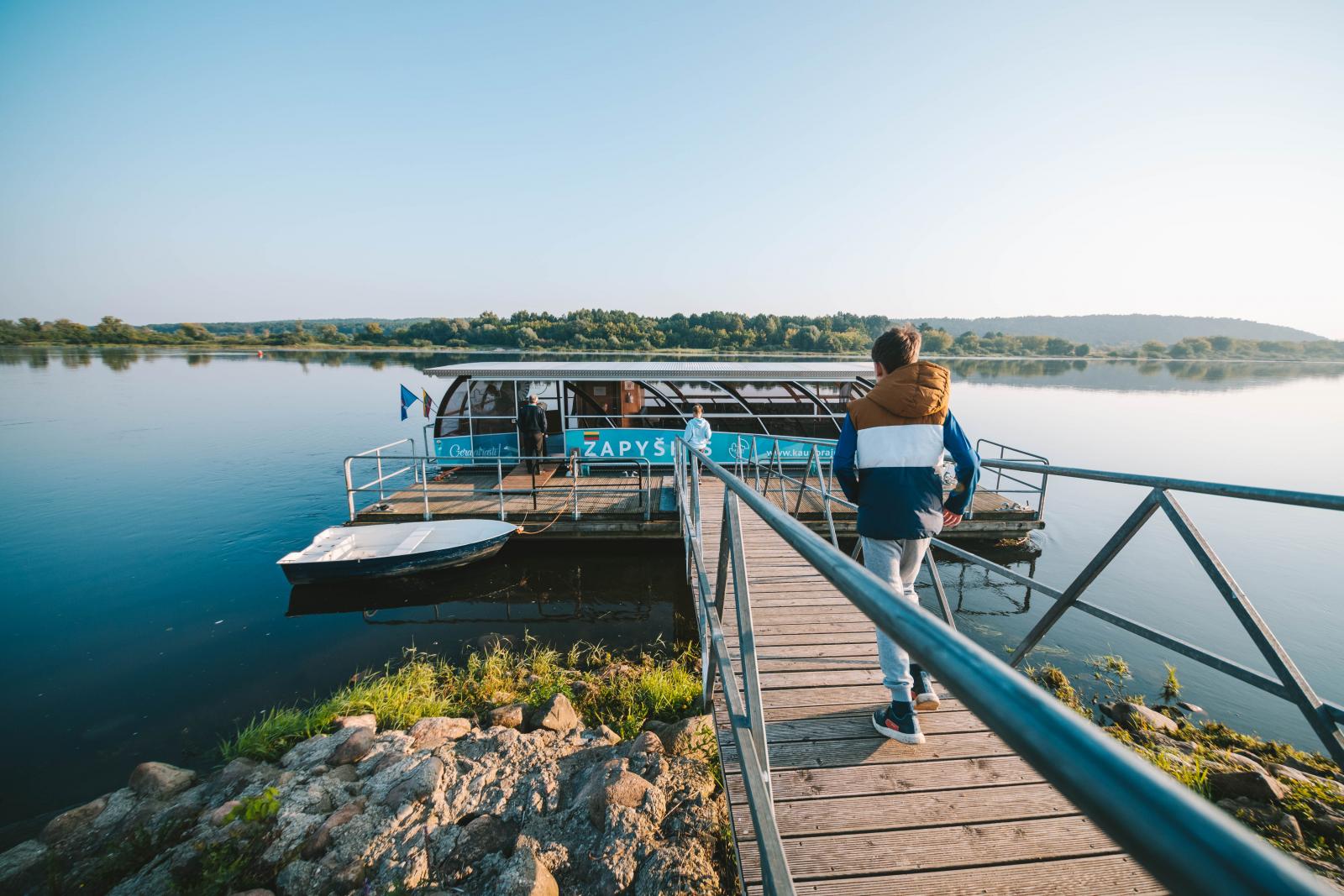 The pier is intended for dropping off and picking up tourists travelling for sightseeing and entertainment purposes when visiting Zapyškis tourist attractions and cultural events. It is particularly crowded during the Republican Kite Festival “Tarp žemės ir dangaus” (“Between the Earth and the Sky”).

Passenger and entertainment ships moor at the pier in summer season. Every summer, the ship “Zapyškis” of Kaunas District Tourism and Business Information Centre’s operates in Zapyškis, carrying passengers to Kačerginė, Kulautuva, Vilkija and other towns by the river Nemunas.

Near the Old Church of St. John The Baptist, pier of Zapyškis 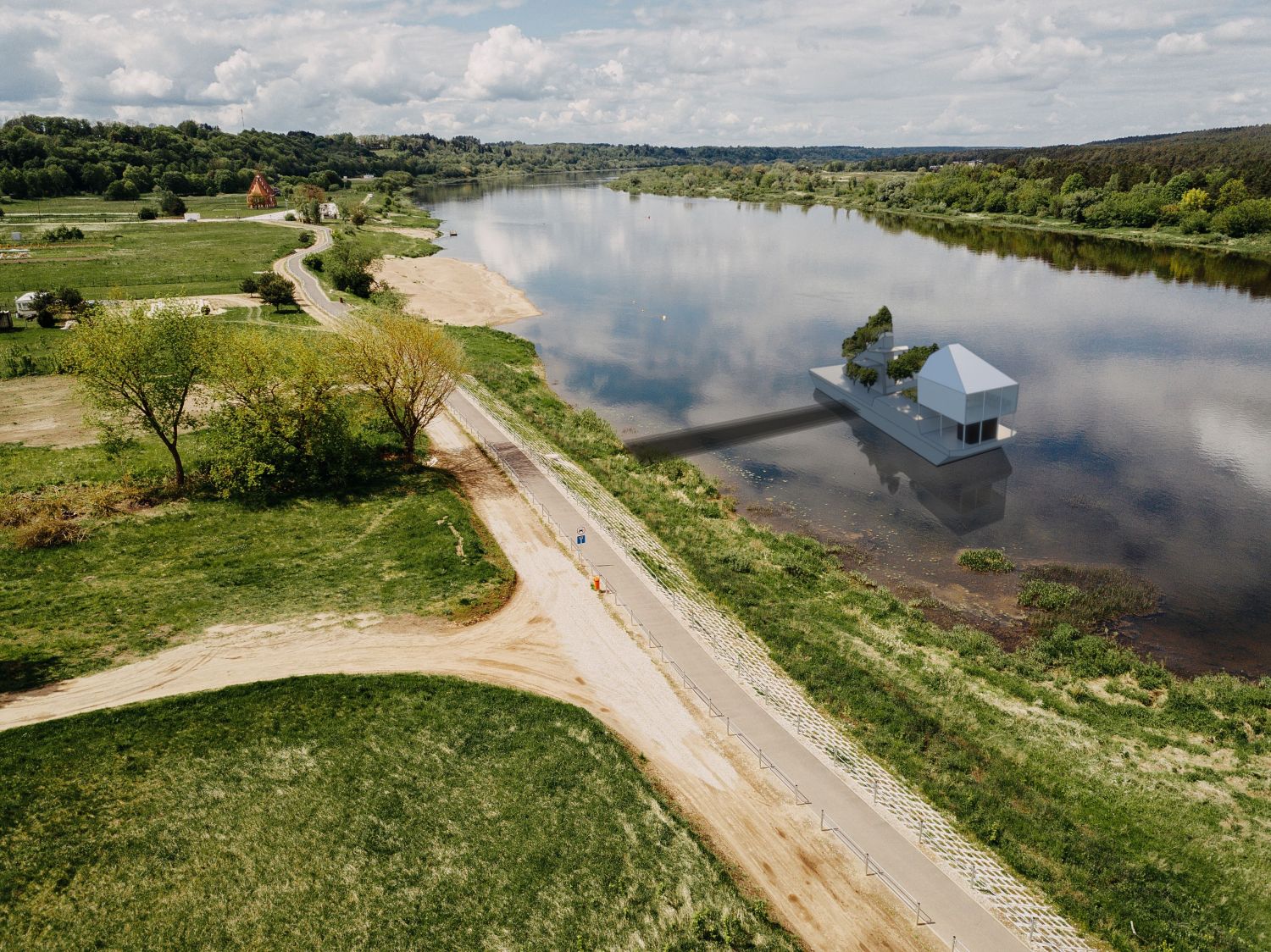 The Nemunas dredger is a special and unique landmark of the Nemunas riverbank near the old Zapyškis church of St. John the baptist. It is a unique accent of the riverbank in Zapyškis, which was built in 1965 in then Czechoslovakia. This technical and landscape design project is a public cultural space, a centre for visual arts, technology, science and creativity.

“Water. Sustainability. Dialogue.”. These are the starting point for exhibitions, performances, art residencies and events. 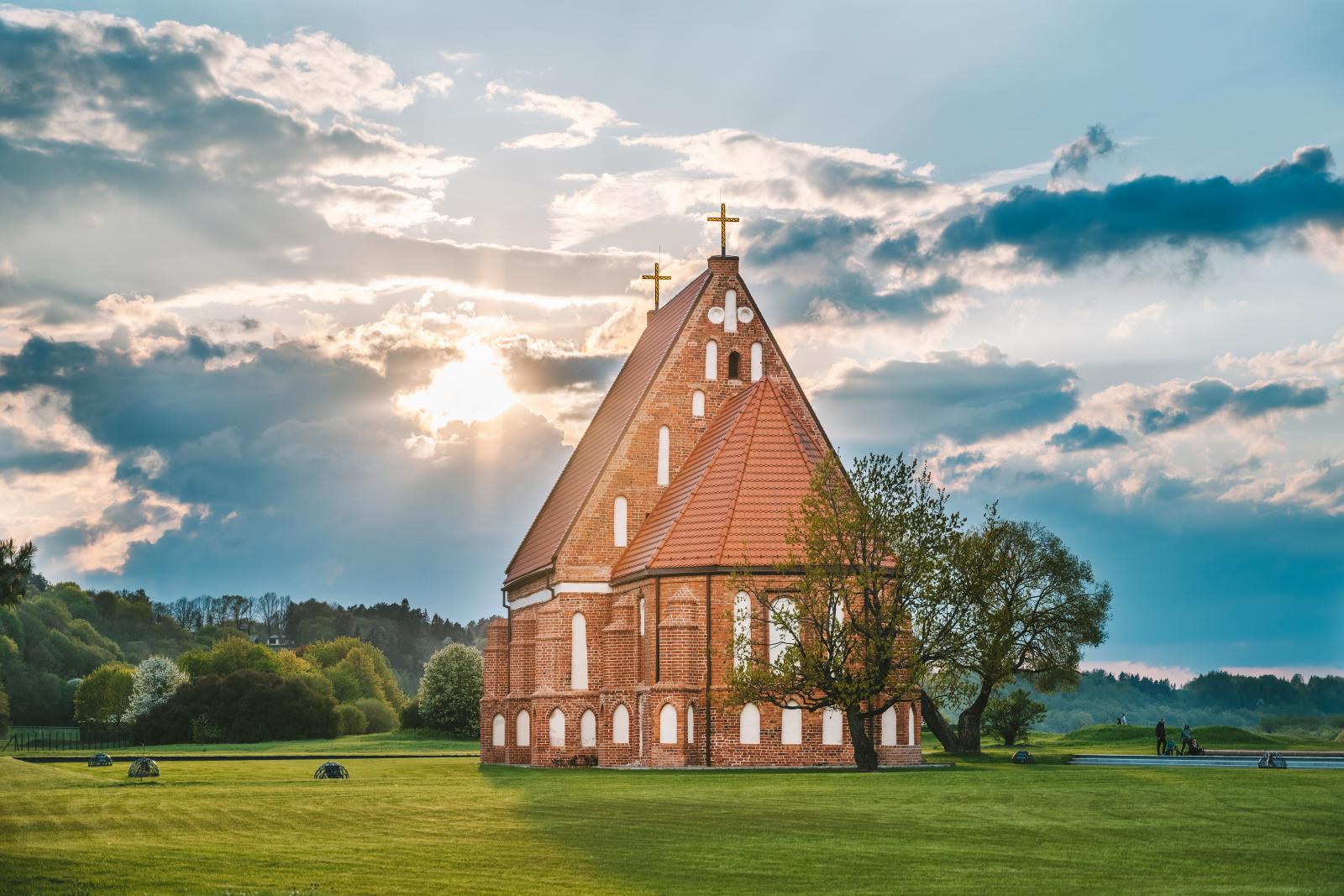 It is one of the most striking and beautiful accents of the Nemunas valley, which can tell a story dating back to the 16th century.It is believed that the first and true founder of the church was Povilas Sapiega, who ruled over Zapyškis in 1555-1579.

Over the centuries, the church has been abandoned and repaired many times.

The church has impressive organ, which used to be called the King of Lithuanian Organs because of its excellent construction.

Since 1996, it has been the venue for the Pažaislis Music Festivals and other chamber music concerts and various events. 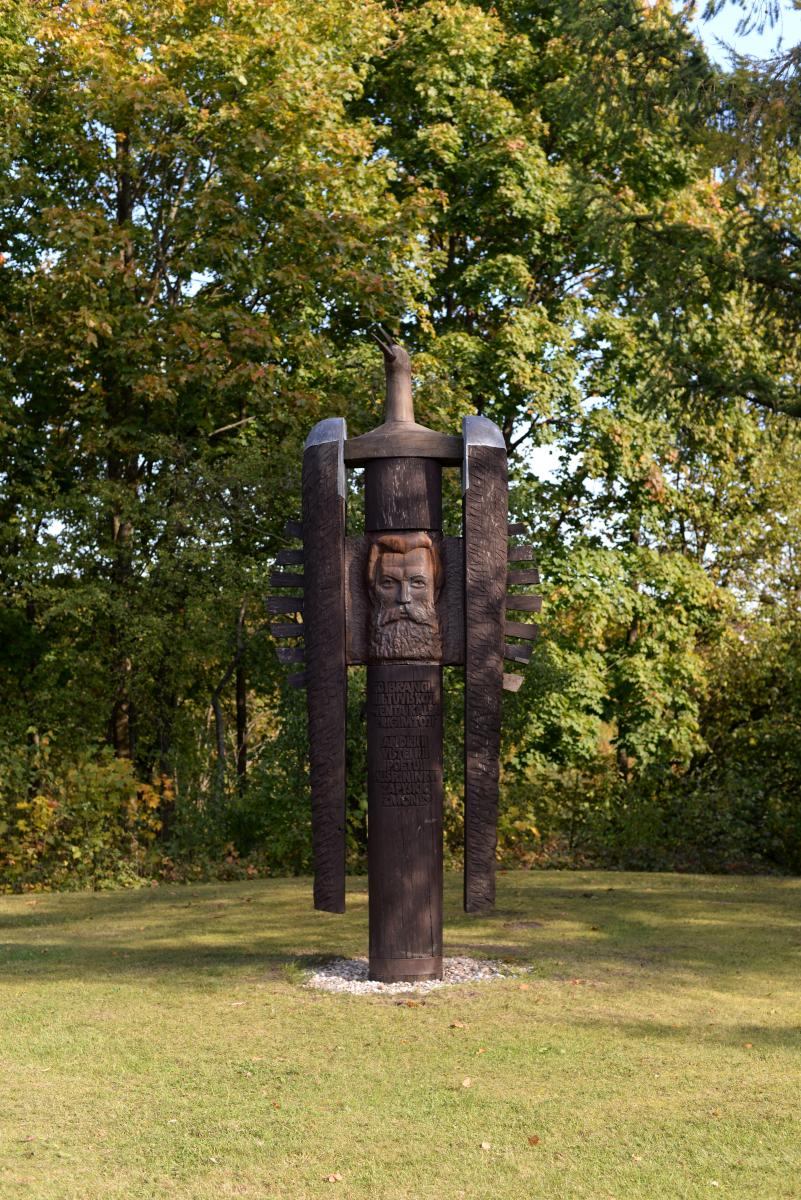 Andrius Vištelis-Višteliauskas is one of the most famous poets, translators, publicists, and an important supporter and distributor of the newspaper “Aušra”. He took part in the 1863 Uprising in the forests of Balbieriškis, Pilviškiai, and Ąžuolų Buda. For his skill and courage he earned the rank of Officer. He not only fought in the Uprising, but also composed rebel songs. Perhaps the most popular song, sung long after the Uprising, was “March for Lithuania”.

Wounded, he was captured, but escaped to the West. A. Vištelis-Višteliauskas died in South America in 1886. 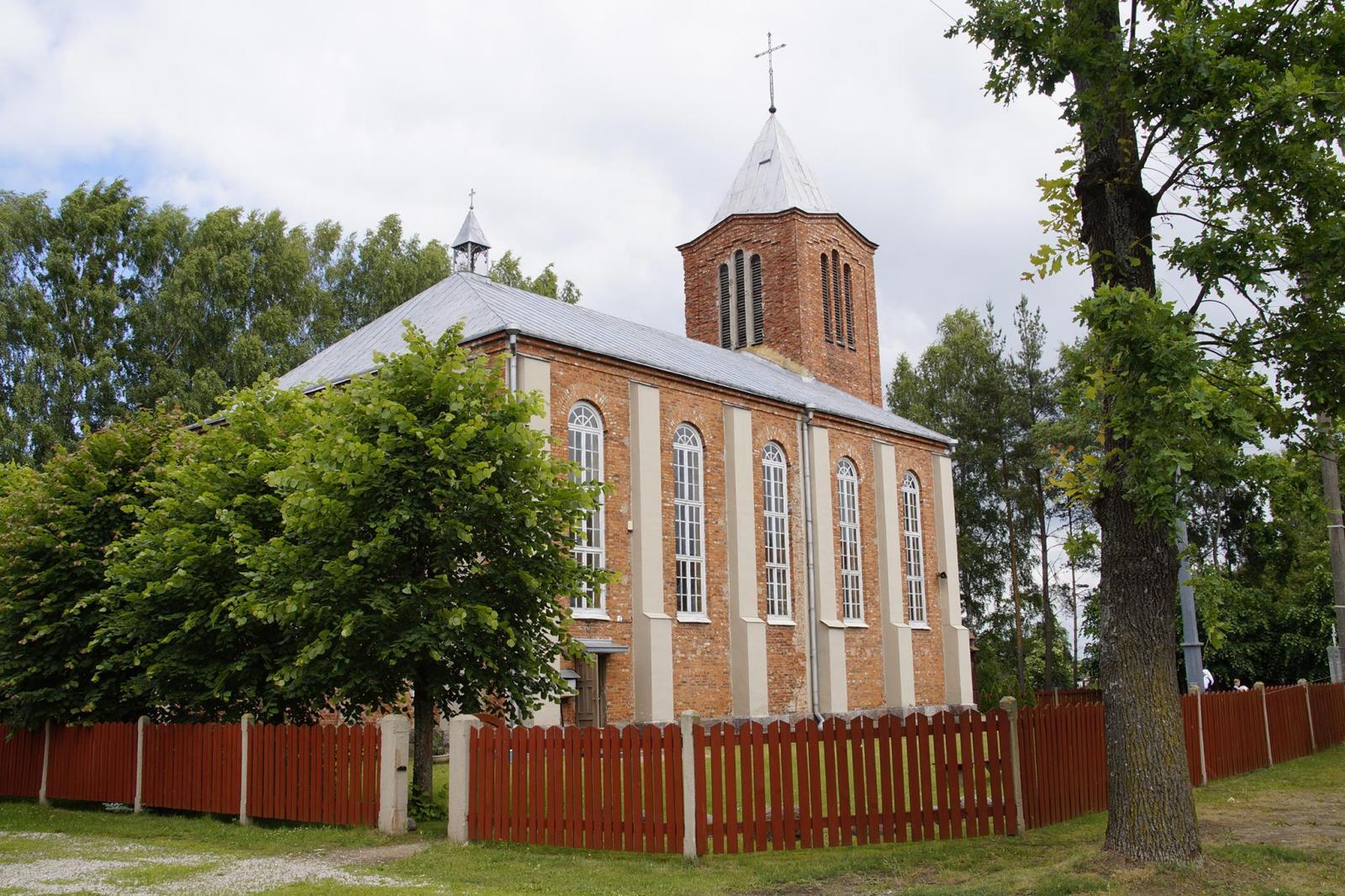 In 1908-1914, a new neo-Gothic church was built on a hill in Zapyškis. The church, which was almost built before the First World War, was blown up in 1915 by retreating Russian troops. In 1937, it was decided to build a new brick church, which opened its doors to the faithful community in 1957.

The facades of the building use modernised elements of historical architectural styles, typical of interwar Lithuanian architecture, integrating fragments of the destroyed church walls. 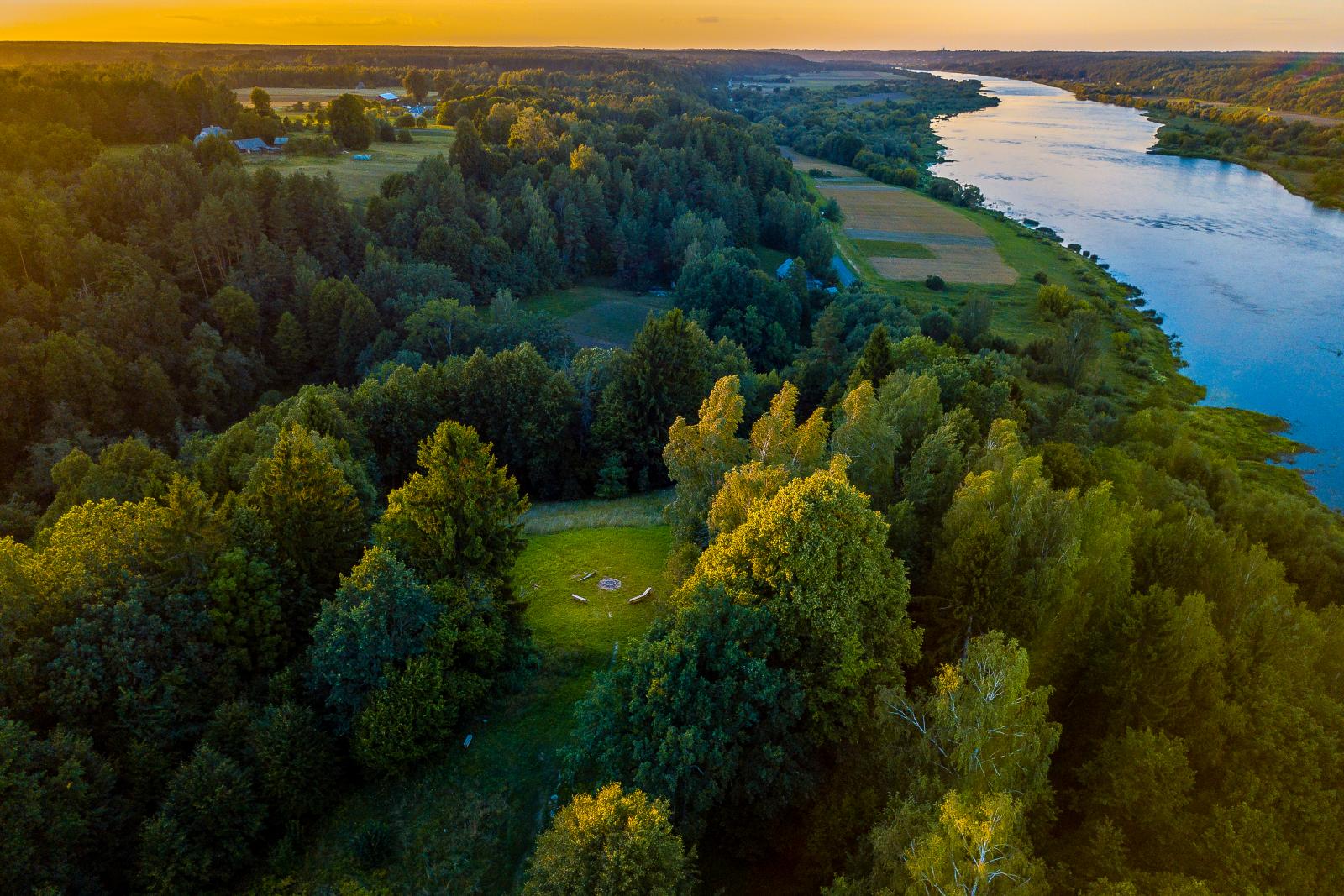 The mound is located on the left bank of the Nemunas river on the cape between the Nemunas valley and the Ova river, dates back to the 1st - 2nd millennium BC. A wooden castle with a defensive wall used to stand here.

Legend has it that the eternal flame was once lit here and sacrifices were made to the goddess Altona, daughter of the sorcerer Altas, patron of young men. They would pray under the oak tree at the top of the mound for the goddess to send the best bride. 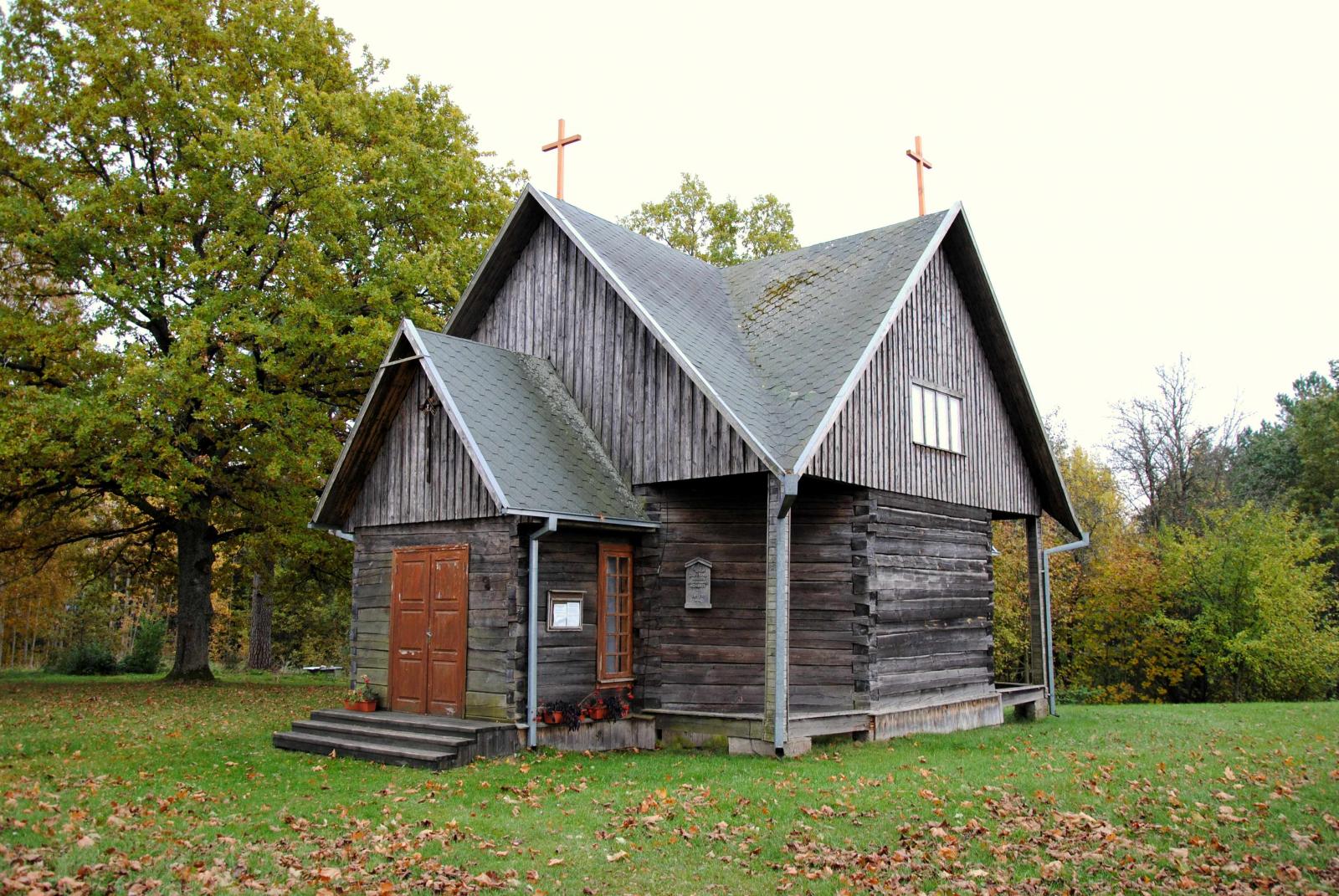 On the beautiful slope of the Nemunas in 1864. the first Jadagoniai chapel was built, the former branch of Zapyškis parish. The shrine, which had served for half a year, burned down during the First World War. Only the remaining ancient cemeteries of the village and the Jadagoniai mound testify that the village was once a settlement.

After Masses next to the chapel, cultural programs are held every year. There is a tradition to build wooden sculptures near the chapel. 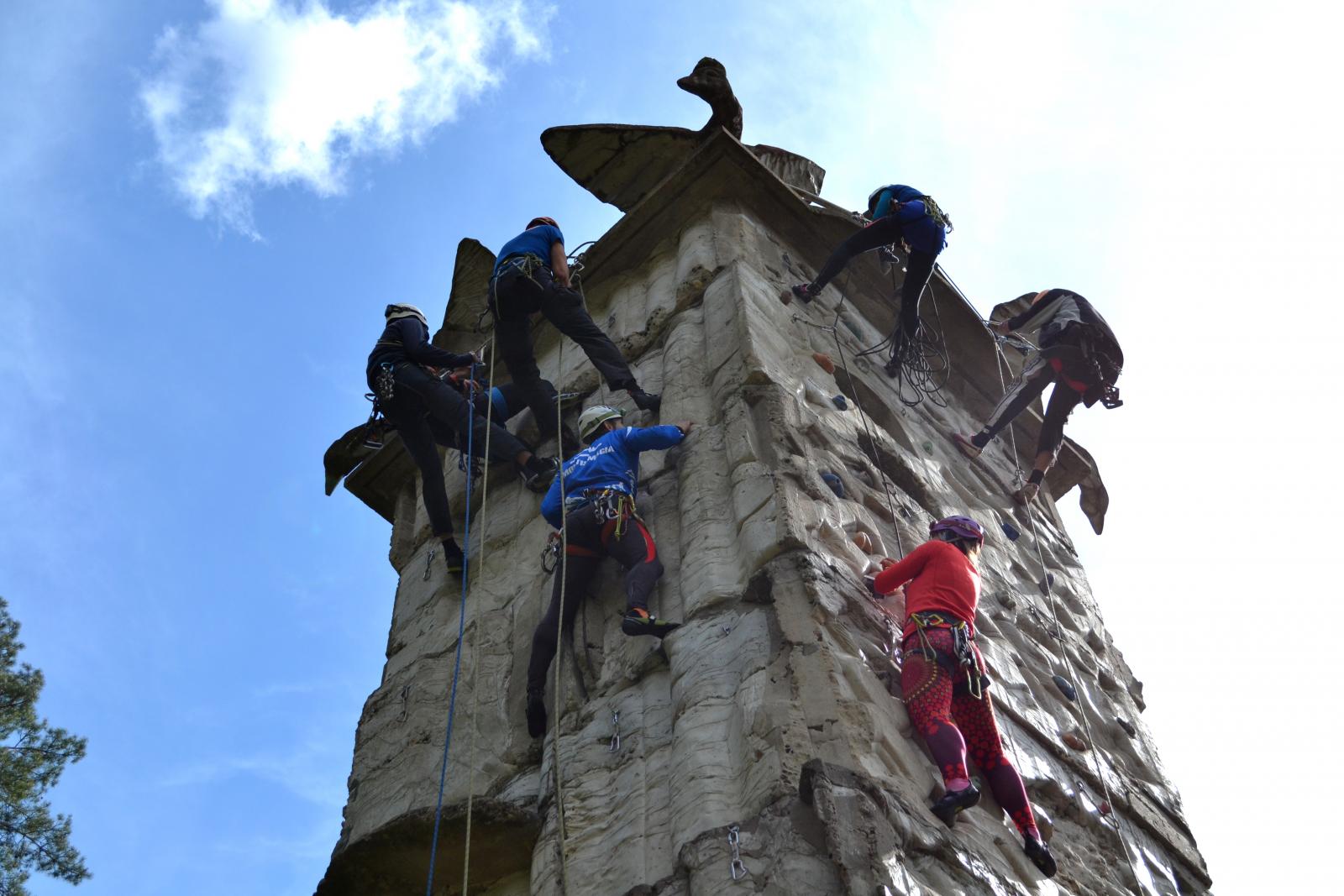 Rafting challenges, the Pagonia Rock, beer crate climbing, a campsite and a sauna – these are not all the active leisure attractions of Pagonia Park in Jadagoniai for corporate teams, schoolchildren, festivals and individual adventurers.

Outdoor tennis, basketball and beach volleyball courts, the possibility of practicing caving techniques, rental of climbing equipment and other services are available with prior registration. 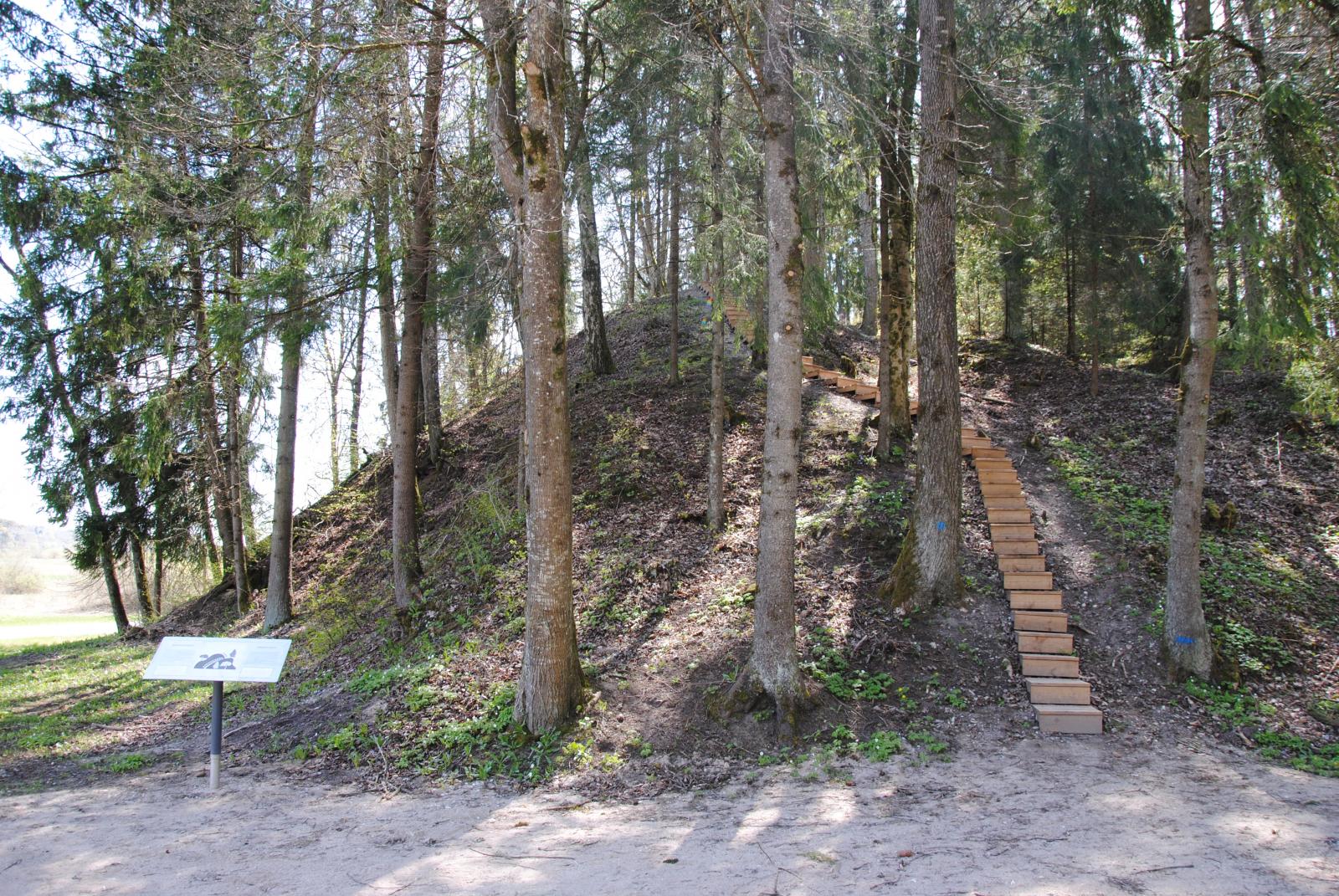 The Jadagniai Mound, also known as Raguva Hill, dating back to the 1–2 millennium BC, stands on the left bank of the Nemunas. It is the site of an ancient Lithuanian wooden castle.

According to a legend, a strong and noble tribe, led by the giant named Jadagonius, who defended Lithuania from its enemies, lived in a valley surrounded by forests in the area by the Nemunas. He is said to be buried in the mound.

About 1.5 km southeast of the Jadagoniai Mound stands a sacrifice hill of Jadagoniai. It is an ancient Baltic sanctuary and a place of religious ceremonies.

You are also welcome to see 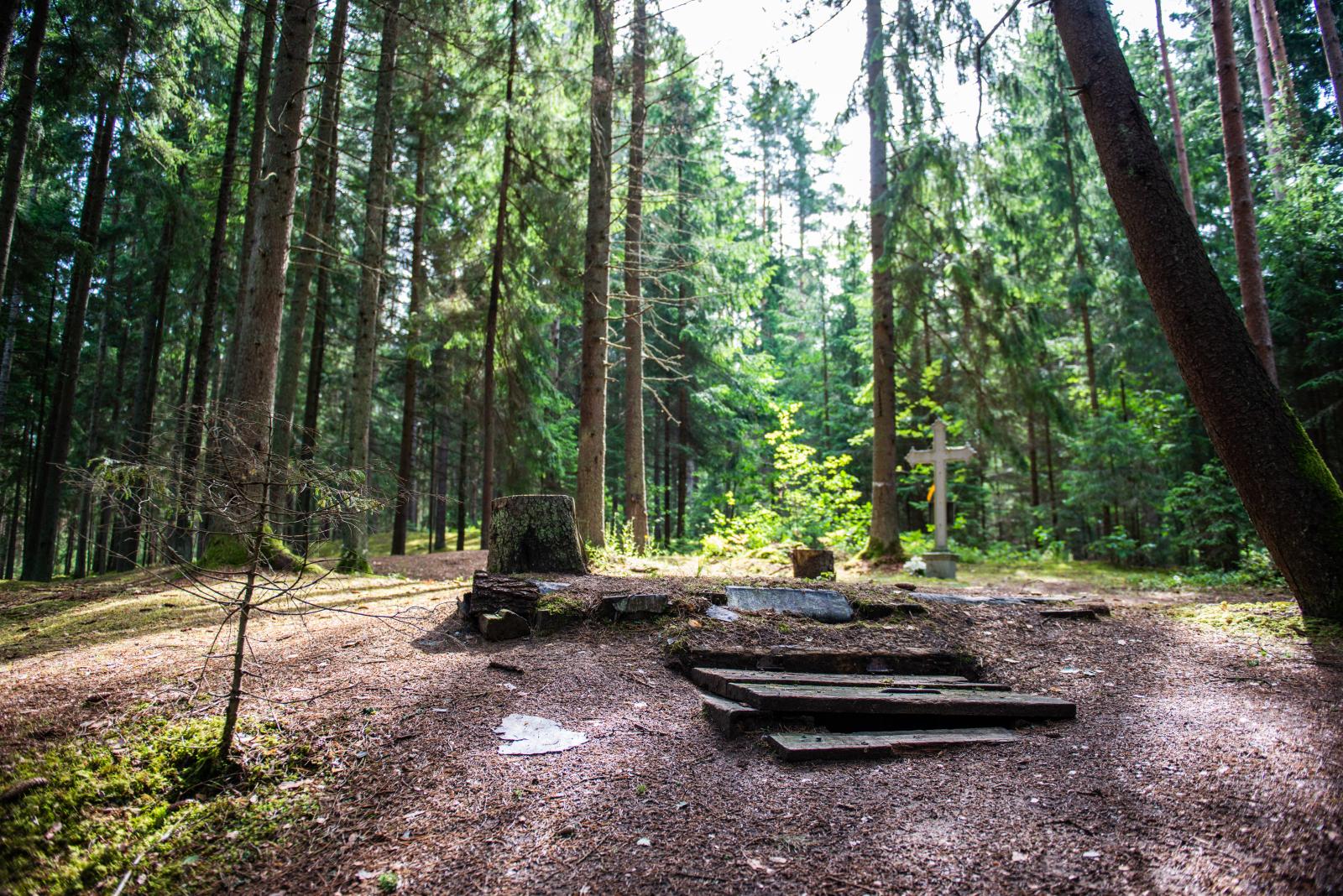 Nineteen partisans were hiding and receiving medical treatment in this two-seater bunker, which was built by J. Misevičius’ squad of the Žalgiris Brigade of the Tauras District, at different times in 1944-1945. One of them, Vytautas Balsys-Uosis, Chief of Staff of the Lithuanian Freedom Movement, was wounded in the fight against the NKVD, and this hiding place and the people in it helped Uosis to survive.

In 2002, the hideout  was rebuilt, but due to the dampness, the wooden slabs rotted and collapsed. In 2013, it was rebuilt again. 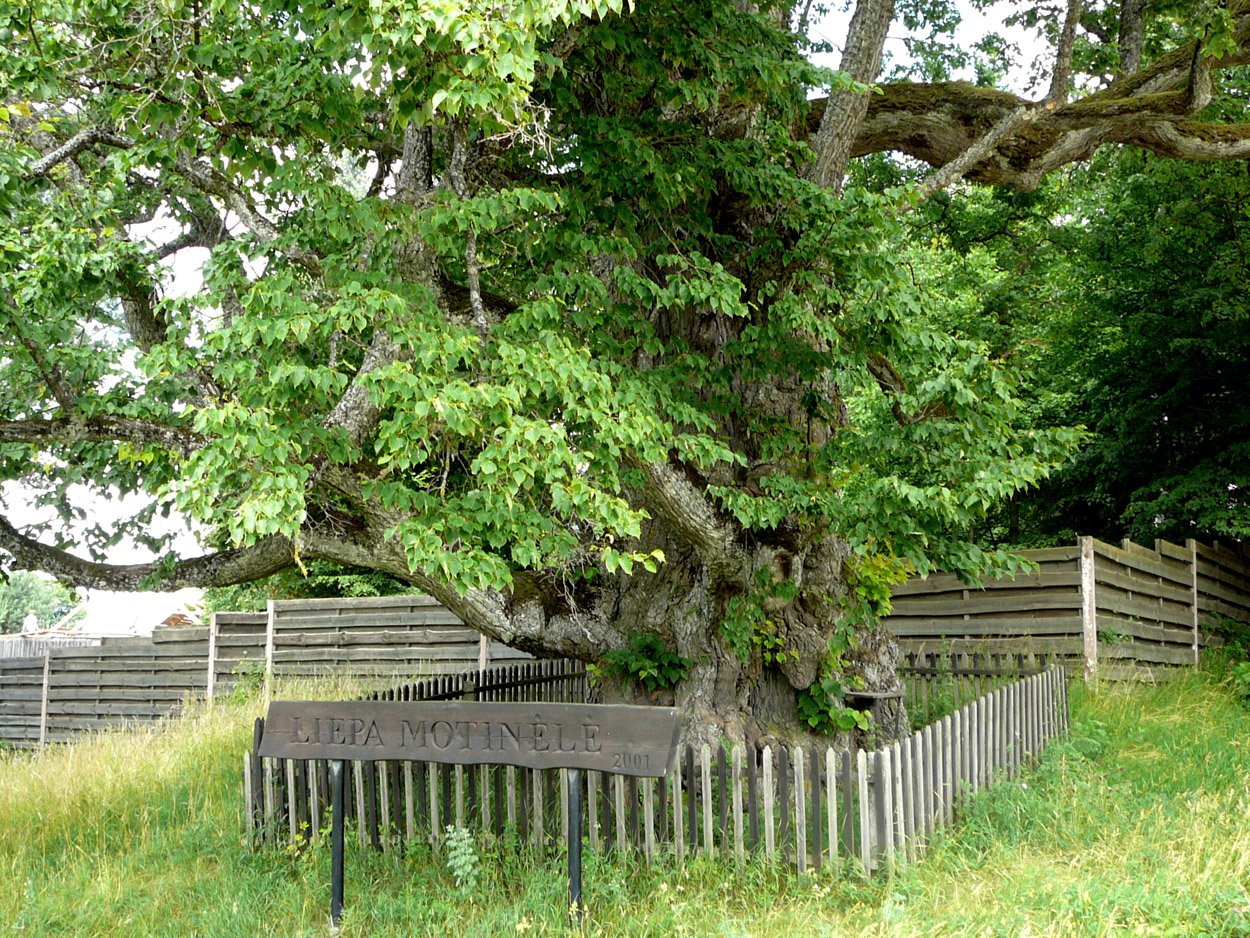 When the village of Braziūkai was founded, the tree was quite small. There were more linden trees in the village where owls used to nest. One of them, the “Mother” linden tree, with a diameter of 2.3 m and a height of 26 m, has survived to this day, and is thought to be over 300 years old.

Locals used to put crosses on it and attach tables with significant dates to the trunk.

Participants of the 1863 Uprising used to gather at the “Mother”. As many as seven people could hide in the hole in the tree. The hole was later concreted over.

The tree has exceeded its natural maturity and is in a phase of stagnation.